Ilsenburg (Harz) is a small town on the Ilse in the northern Harz region , belonging to the Harz district in Saxony-Anhalt . It was officially recognized as a climatic health resort in 2002 . 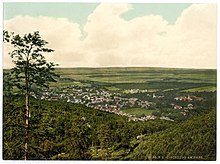 View of Ilsenburg before 1900 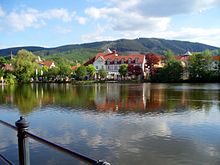 Ilsenburg is located between Wernigerode (Saxony-Anhalt) in the east and Bad Harzburg ( Lower Saxony ) in the west at the exit of the Ilsetal on the Heudeber-Danstedt – Vienenburg railway line . The city is surrounded on three sides by forested mountains that are over 550 m high.

From Ilsenburg the Brocken can be reached via a hiking trail past the Scharfenstein and Kleiner Brocken , which was named Heinrich-Heine-Weg in honor of Heinrich Heine . Heine had hiked the region in 1824, climbed the Ilsestein and described his experiences in the revised travelogue Die Harzreise , which was published in 1826 .

The Paternosterklippe is located southwest of the city , as is the Bäumlersklippe . A family drama from there was taken up by Theodor Fontane and found its way into his novella Ellernklipp .

Ilsenburg is located in the Harz National Park and is the official national park community.

The Harzer Grenzweg on the Green Belt runs west past Ilsenburg in a north-south direction for around 95 km to Tettenborn near Walkenried along the former inner-German border ; In some cases, border installations and border routes are still recognizable. Since this area was closed for around 40 years, a diverse flora and fauna has been preserved there.

At Harz monastery trail , the two monasteries in Ilsenburg and Drübeck in the district.

On July 1, 2009, the previously independent communities of Darlingerode and Drübeck were incorporated with the district of Oehrenfeld . At the same time, the administrative community Ilsenburg (Harz) , whose seat was in the city, was dissolved.

* No more recent data are available for Darlingerode and Drübeck

** with the district of Plessenburg

*** with the district of Öhrenfeld

In 995, Emperor Otto III. on a castle near today's Ilsenburg, which was built in the 10th century to protect an imperial hunting ground in the Harz Mountains. In 1003 his successor Heinrich II handed over the castle to the Bishop of Halberstadt for the foundation of the Benedictine monastery Ilsenburg . A new imperial castle was then built on the Ilsestein , but it was completely destroyed in 1107.

The village that was built around the monastery , which was devastated in the Peasants' War in 1525 , developed into a patch in the county of Wernigerode at the end of the 16th century . In 1545 an ironworks with two blast furnaces was built, which Tsar Peter I visited in 1697 . Ilsenburg developed into a prosperous community that became the residence of the Counts of Stolberg-Wernigerode at the end of the Thirty Years War . They only moved their court seat back to Wernigerode in 1710 .

In the witch trials in Wernigerode u. a. Mette Fliß from Drübeck sentenced to death in 1583.

Ilsenburg was particularly known for the production of stove plates and artificial casting.

In the 18th century, the Ernstburg was built southwest of Ilsenburg .

In the Kingdom of Westphalia , Ilsenburg was part of the Canton of Ilsenburg . In 1893, 2400 holidaymakers visited Ilsenburg after the railroad had reached the community in 1884 . The steelworks was temporarily shut down in 1911.

During the Second World War , a satellite camp of the Dora-Mittelbau concentration camp was briefly set up in the village, in which 16 Italian military internees were used for forced labor .

On October 31, 1947, Ilsenburg was named a climatic health resort and, in recognition of its economic importance and as an important recreational center, was granted city rights on January 1, 1959.

The Protestant Research Academy was founded in Ilsenburg in 1948 .

The name addition (resin) was officially added to the previous name on February 1, 2007.

The former monastery church of St. Peter and Paul, which in the meantime also served as a castle church, belongs to the Ilsenburg monastery . The town of Ilsenburg has owned the church, which is now used for cultural and religious events, since 1974.

The Catholic Church of St. Benedict , named after Benedikt von Nursia , is located on Schlossstrasse. The church, built by Wilhelm Ulrich in 1934/35 , is the westernmost church in the Magdeburg diocese ; since 2010 it has belonged to the parish of St. Bonifatius, based in Wernigerode .

The CDU politician Denis Loeffke has been mayor of the city of Ilsenburg (Harz) since the mayoral election on May 22, 2016.

The coat of arms was awarded on February 22, 1938 by the Upper President of the Province of Saxony.

Blazon : "In silver on green ground between two green deciduous trees (Elsen or Erlen) a red castle gate, the gable of which is covered with a golden shield, in which a black stag is covered."

Up until 1808 the community had a seal that can be verified for the first time in 1609. It shows the castle gate between the Elsen, so it is talking (Elisinaburg = Ilsenburg). After the abolition of Westphalian rule, the community only ran the stag of the Counts of Stolberg until 1900 .

The current coat of arms was designed by the Magdeburg state archivist Otto Korn . 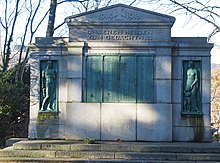 The Ilse Grobblech GmbH is active in steel and employed 2012 about 800 employees. The company is part of Salzgitter AG . In addition, Thyssenkrupp Presta has two production sites in Ilsenburg, with the manufacture of assembled camshafts at ThyssenKrupp Presta Ilsenburg GmbH and ThyssenKrupp Valvetrain GmbH.

Until 1990, one of the largest smelting works in the Mansfeld Combine was operated in Ilsenburg , where, among other things, imported electronic scrap was melted down. In this way, large amounts of highly toxic heavy metals were released into the air every year.

The station Ilsenburg is located on the railway line Heudeber-Danstedt-Bad Harzburg / Vienenburg . There are hourly connections to Magdeburg or Halle (Saale) and to Goslar . All services are operated by Abellio Rail Central Germany .

Ilsenburg has its own junction on the federal motorway 36 ( Braunschweig - Bernburg (Saale) ).

→ Main article : List of personalities of the city of Ilsenburg (Harz)

Cities and municipalities in the Harz district

Districts of the city of Ilsenburg (Harz)