This article deals with the stove as a heat generator. For other meanings, see Oven (disambiguation) .

A furnace (from Middle High German oven / oven ) is a device for the controlled generation of heat , mostly by burning firewood or fossil fuels such as gas , oil or coal .

Furnaces exist in different designs and for different applications, from simple domed hearths for baking and heating to the large blast furnaces for producing steel of the industrial age .

There are different types of ovens depending on the application: 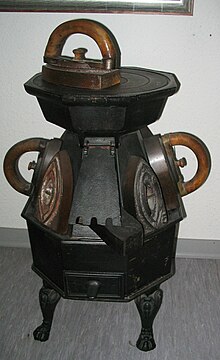 Room stoves serve as a heat source for rooms, the designs range from simple wood stoves to fireplace or tiled stoves .

A distinction is made here between room air-dependent and room air- independent air supply. A room air-dependent fireplace z. B. a ( open fireplace ) draws the oxygen required for combustion from the interior: Operation depends on the air in the room. In contrast, a room air is un -dependent furnace with air or oxygen supplied from the outside. The abbreviation for room air independent is RLU. The terms can be found in Germany in the Firing Ordinance ( FeuVO ).

In older buildings, the shell of the house is made relatively leaky, so that there is enough fresh air for combustion through leaks in the windows. With the airtight construction used today, this fresh air supply is no longer automatically guaranteed. That is why there are room air-independent ovens and firing systems to which the combustion air is fed via pipes or shafts.

According to building material

According to the type of heat emission

According to the technique

According to energy source

Furnaces have been documented in Central Europe since the Neolithic ceramic band culture . Kilns for firing ceramics have existed at least since the urn field culture .

Already in Goethe's time there was a shortage of firewood and competitions organized by sovereigns in which fuel-saving stoves were to be invented. The wood gasifier (stove) is a more recent development with the best efficiency or the best energy utilization of domestic wood heating. A wood gasifier with regulated secondary air is able to burn its fuel very cleanly and completely.