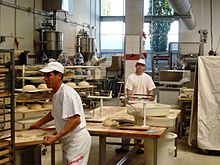 The bakery of a larger bakery

A bakery is a craft business that produces baked goods such as bread , rolls , pretzels , coffee pastries or cakes .

The sales rooms that are usually directly adjacent to the production rooms are called baker's shops and are often marked with a pretzel on the nose label. The production area is called the bakery .

Before using kneading machines, the doughs were kneaded by hand in baking troughs.

Brick oven in a bakery around 1920

The bakery is the production room for the baked goods to be produced. The word bakery does not limit the size of the production room. There are bakeries in very different sizes, from the classic small craft business to largely mechanized large bakeries. In the case of fully mechanized bakery factories, on the other hand, one speaks of baking lines.

In order to be able to call himself a bakery , a responsible, trained master baker must be in charge of production. In addition, an entry in the craft register is mandatory. The associated profession is that of the baker . As a rule, trained bakery salespeople work in sales . Such prerequisites are not necessary in the bakery, since the baking of pre-made dough pieces (which are usually delivered in frozen form from a manufacturing bakery) does not require any special training. Trainees can also be employed here.

If a building consists largely only of the brick oven , it is called a bakery .

Classification according to size

Depending on their size, bakeries are part of the food trade or the food industry . They can be divided into:

Origin of the bakery trade

In the regions that are part of Germany today, the baker's profession has been known at least since the time of Charlemagne (768–814). At that time, it was mostly serfs who worked on Fronöfen or monastery servants on monastery ovens. Due to the growth of the cities, the baker's profession developed as a "free" profession in the 10th century. The job title “Beck” (short for becker) or “Pfister” (from the Latin “pistor”) was used. At first, very few bakers had their own oven. They therefore bake their goods in the city's own bakeries .

Bakeries are dying out

Due to the increasing massive competition from mass production in industrial bakeries and frozen goods for baking in the self-service bakeries, the classic retail baker is threatened with extinction in Germany, but also in other industrialized countries. Ten years ago, the daily bread roll sales for many home bakers were 3000 pieces, today this is sometimes only 1000 pieces. Many chains produce on the assembly line and then deliver, self-service bakeries are mostly supplied with frozen goods from abroad, where wage costs are lower (even with transport costs).

In Austria, there is a process of concentration on larger bakeries, on the other hand, smaller bakeries are asserting themselves through regional delivery services or specialization in special quality goods.

The distribution of sales according to company size has its focus on large companies: