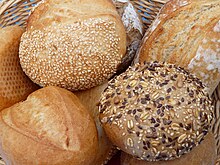 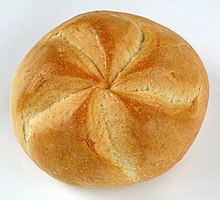 Brötchen (independent diminutive of bread ) or bread roll are names for small baked goods of various kinds. In the various German-speaking areas there are a number of other words for them, but they all mean essentially the same thing. Bread roll is a collective term for mostly unsweetened small baked goods made from light or dark wheat or rye flour , or mixtures of both types of flour. The bulk liquid used is mainly water (water buns) , but sometimes milk (milk buns) . Traditionally, baking yeast or sourdough are mainly used as loosening agents . In Germany, according to the guidelines for bread and small baked goods, no more than 250 g are traded. In 1957, the legal requirement for a minimum weight was abolished.

The word "Brödle" in Swabian, Baden or Alemannic does not refer to bread rolls in the sense of this article, but rather stands for cookies .

Buns are mostly wheat pastries and don't stay crispy or soft for long. The inside of rolls is called a crumb .

In addition to the term 'Brötchen', which is mainly used in the northern part of the German-speaking area, there are various other names in various regions. The term bread roll itself occurs mainly in Lower Saxony, Mecklenburg-Western Pomerania, North Rhine-Westphalia, northern Rhineland-Palatinate, large parts of Hesse, northern Saxony-Anhalt and parts of Brandenburg. In Thuringia, southern Saxony-Anhalt and Saxony, both 'rolls' and 'rolls' are used. In Thuringia and Saxony, a distinction is sometimes made between rolls and rolls - Semmel then refers to the double roll.

In most regions of Germany, “bread roll” and “bread roll” are used synonymously, with the exception of the almost exclusively used compound breadcrumbs . In other areas, there is a difference in meaning: This is the name in Austria and Bohemia with bread little sandwiches, so canapés . The term was adopted for specific innovations: The soft hamburger buns and the small, ready-to-bake baguette buns established by the fast food chains (beginning: McDonald’s in Munich in 1971), but not for the baked-up buns made in Austria.

The diminutive form of bread is also used in the idioms “bake small rolls” and “earn rolls”. In alemannischen Vorarlberg is found occasionally in addition Brötle also rolls (gemeingermanisch). As a generic term for the whole range of products, including Stangerl etc., serves pastries ( biscuits in the German and Swiss food code), in Switzerland is colloquially Brötli also represented. In old Bavaria, the term roll functions as a community name and the square small baked goods rolls are also used in product names . In Austria, the roll is usually round - with the exception of the Styrian Langsemmel and occasionally in Vorarlberg. The square biscuits are usually called Weckerl , as are the actual small, elongated biscuits (the small rolls), unless they are sometimes called pointed in a twisted shape ( e.g. Kornspitz ). Long, thin pastries are called ~ stangerl , ~ stange , ~ stängel , and round pastries usually ~ loaf or ~ laberl (the small loaf ).

'Rundstück' and 'Schrippe' also differ in the area around Hamburg due to their different shapes. Bread rolls are the community name here (see also rye rolls, sesame rolls, etc.). 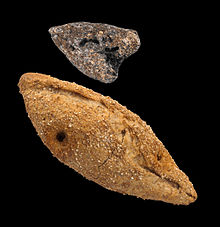 Today, buns are also manufactured semi-automatically in the craft with the support of machines (for example a bun press ), while in industry production is fully automated. Shaping by hand is rarely found in the craft today.

The character of a roll is largely determined by the way the dough is handled . Specially grown grain, baker's yeast, powerful kneading machines and malt-containing baking agents significantly reduce the dough's maturing time. Today, bun doughs are usually made directly without pre-dough. At least 90 percent of the ingredients are flour ( wheat flour type 550 ), water, salt, yeast and possibly a baking agent. The addition of milk fat (e.g. butter ), margarine , edible fat (e.g. lard ), cooking oil and preparations made from it is also permitted. Buns with rye and seeds are common. Baking agents provide the yeast with nourishment and improve stability, because less starch is broken down for ripening. Soft wheat flour, which is well suited for making bread, is mainly used.

Frozen or unrefrigerated baked rolls are also available in stores:

Various additives are allowed to be used in the production of rolls. The following substances that are considered harmless can be added: lecithin , edible acids such as citric acid and acetic acid , sugar, malt extract , guar gum (a thickener), soy or bean flour, emulsifiers (esterified glycerides), such as diacetyl tartaric acid ester , furthermore phosphate (separating agent), Acidity regulators such as calcium carbonate or calcium sulfate , enzymes , flour treatment agents such as ascorbic acid (vitamin C) or cystine , cysteine as well as flavor precursors for the scent of bread rolls.

Bread rolls are fresh baked goods and age quickly. With an increasing proportion of rye, the shelf life improves; however, bread rolls only stay fresh and crispy for a few hours.

The crust that determines the taste is dry after baking. It absorbs moisture from the surroundings and the crumb , the bun then becomes soft and sticky. In principle, bread rolls should be stored dry and cool (but not below 7 ° C). Fresh, warm rolls should be taken out of the bag immediately, as the evaporating moisture passes into the crust and makes it soft.

A sandwich is quickly softened in a tight plastic or metal cover. Here the moisture in the topping is transferred to the entire bread roll. It is also advantageous if the toppings and rolls are stored separately and the roll is only occupied shortly before consumption.

There are various options in the household. The bread roll stays crispy for a relatively long time in a stone pot (Roman pot) or a cookie jar. However, it must not be stored with moist goods (ham rolls, etc.), as the moisture migrates here. A bread roll bag is also suitable.

For longer storage times, it is advisable to store bread rolls in plastic bags so that they do not dry out and to bake them in the oven or on the toaster before consumption. Buns can be frozen well. Please note that even under these circumstances moisture will escape from the frozen food ( freeze-drying ). 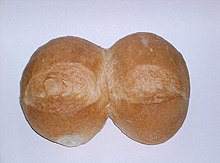 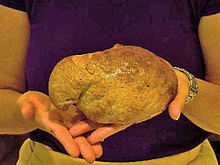 a long bread roll that is mainly found in southern Austria

There are numerous regional variants that differ in terms of bread roll dough and shape and have their own names.

Bread rolls are also often used in the fast food sector and z. B. offered in the form of ready-made rolls. Originally, this took place exclusively in the bakery trade itself, as part of the so-called baker's gastronomy . Because of the popularity of these products, you can find bread rolls filled with cheese or ham today from many suppliers and recently even from some fast food chains.