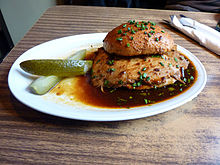 Round piece warm in the Oberhafenkantine in Hamburg

A round piece warm , also Hamburger Rundstück warm , is a warm snack in northern Germany , especially in Hamburg , where a slice of warm roast beef or pork is placed in a halved round piece (in the narrower sense a round wheat roll without cuts). which is then doused with gravy . Pickles or mustard gherkins and aspic from the meat stock can serve as side dishes .

According to one of several theories, Rundstück warm is a forerunner of the hamburger .

As early as 1869, inn visitors in Hamburg were offered a round piece with warm roast . In any case, around 1900 this meal seems to have been widespread in Hamburg. The guide through Hamburg and the surrounding area , published at the time, reports that people from Hamburg attach great importance to good food and drink, and mentions: A very popular, short snack is also the "Rundstück warm", a bread roll with warm roast and sauce .

The innkeeper Heinrich Heckel is named as the inventor of the round piece warm. He operated the Heckel beer house on the Reeperbahn , on the corner with Hamburger Berg (the building now houses a branch of the Hamburg casino). In 1901 a party came to Heckel's restaurant after the kitchen was closed and wanted to eat something warm. But Heckel only had roast with sauce and round pieces. His guests asked him to warm them up and were so impressed with the result that they recommended it to others. Another version is assigned to the year 1904 according to a newspaper article and thus contradicts the travel guide mentioned above even more strongly, at least in terms of the time allocation. Accordingly, it was Heinrich Heckel himself who came up with the idea of ​​offering round pieces with roast as a round piece warm after his cook fell ill.

As a quickly prepared intermediate dish, Rundstück was increasingly offered warm in many restaurants in Hamburg from the early 20th century at the latest or was prepared at home (also as leftovers).