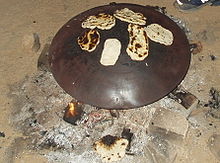 Thin flatbreads baked on a sac over an open fire

Flat cakes rest in the sun before baking, Upper Egypt

Flatbread is a simple bread that consists essentially of crushed or ground grain and water, the dough of which is usually unleavened and, with a few exceptions, made without yeast . Since such dough does not rise much, it is baked in thin flatbreads - the finished bread is only millimeters to a few centimeters thick.

Flatbread is the earliest development stage of bread and emerged directly from the oldest cereal recipe , porridge , which has been one of the most important dishes worldwide since the beginning of arable farming until today. The Egyptians and Sumerians knew flatbread, that is, cereal porridge baked on stone, at least since the 5th millennium BC. In Europe, the production of flatbread from millet , barley and wheat , partly previously roasted and roughly crushed, is documented from the 3rd millennium BC, e.g. B. from the Cortaillod culture .

Flatbreads are known in all agricultural cultures around the world and are still the most widespread method of making bread today.

In India and Pakistan flatbreads (commonly: Roti) in many variants known as the soft and thick Nan , the thin chapati , the baked with butter paratha , Puri from wholegrain flour and usually strong and spicy, extremely thin Papadam . Roti Canai flatbread is found in Malaysia .

Arabic flatbreads ( Chubz ) are usually very thin, consist only of the upper and lower crust and can therefore be opened into a bag that can be filled with meat and vegetables. They usually contain a pinch of sugar to help pre-swell the yeast.

In Turkey , in Iran , where bread is still traditionally baked on pebbles on the wall of the oven, and in the neighboring countries, there are similar, thin lavash (also called Yufka in Turkish ) and flatbreads several centimeters thick made from yeast dough, called Pide in Turkey . The Greek , slightly thinner variant is called pita .

Furthermore, there is similar to the Turkish Yufka , so-called Fyllo in Greece ( Greek φύλλο = "leaf", also "Fillo" or "Filo") or Malsouka in North Africa . This turns into specialties such as B. Spanakopita , Galaktoboureko (Greece) or Brik called fried dumplings (North Africa, Tunisia ) made.

In Israel , too , pita is the most popular type of bread today. The matzo is a special flatbread for the Jewish Passover ; from this also the host developed , which is used in western churches for the Eucharist / Last Supper .

In Italy , simple flat bread such as focaccia was used to make pizza and - regionally limited to the Romagna region - piadina . In the Alpine region it has been preserved as Schüttelbrot and Vinschgauer .

In Poland we know podpłomyk a simple, originally altslawisches flat pastry that is also baked with topping.

From Sweden originating crispbread and Tunnbröd . In Iceland we know two forms of unleavened bread: the original fried only during the Christmas season in mutton laufabrauð ( "leaves bread, leaves bread"), which is very crispy and fragile and is decorated with elaborate patterns, and the flatkaka called smooth pan bread made of coarse flour, that is often used for sandwiches. In Norway , a distinction is made between the soft, pancake-like lefser and the thin, fragile flatbrød . The Sámi people traditionally make the soft flat bread "Gáhkko" in the radiant heat of an open fire.

The thin tortillas made from corn or wheat flour are known from America .

In Ethiopia, dishes are spread on the soft Injera flatbread and eaten with the hands.

In Chile, hallulla is a round white bread made from wheat flour , baker's yeast , milk , water , table salt and butter .