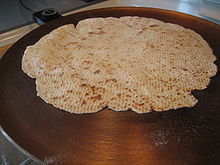 The lefse is baked on a takke

Lefse (der or die; in the plural: the Lefser ) is a flatbread used in Norwegian cuisine . Lefse consists of potatoes , rye or wheat flour in regionally different compositions. Baked is traditionally on a baking sheet ( Norwegian Steiketakke shortly Takke or Bakstehelle ), which was previously made of stone, and later from cast iron ; today there are also electric baking plates  (picture) .

There are numerous different preparation variants, topping options and dosage forms for lefse, thick or thin, hearty or sweet, white or brown, flat and round, rolled, folded or pieces of cake. Well-known regional specialties are: 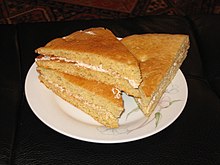 The Tykklefse are particularly thick and often sweet 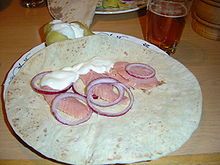