Ham has several meanings. The word originally referred to the "leg" in the sense of "bone". Together with "thigh" it comes from the Indo-European root [s] keng for "crooked, crooked" (probably because of the curvature of the thigh bone). The name of the disease scoliosis (the "hump") has the same origin. According to the World Health Organization (WHO), consuming ham (processed red meat) increases the risk of cancer.

Ham as a piece of pork

The ham is the leg of the pig , i.e. its back body or pelvic region. Regionally it is also referred to as leg , mallet , ham (to distinguish it from shoulder ham ) or jellyfish . In Switzerland, the term Hamme is sometimes used. The ham is about a quarter of the weight of a pork half . It can be broken down into the following four parts:

Ham as a preparation method 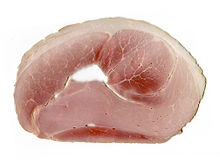 Boiled ham: The round shape, like the angular one of the raw ham, is created by pressing the boned meat.

The term "ham" is used for ready-made meat products, which are usually eaten cold and usually consist of the leg of the pig. To do this, they are cured , scalded , fried , dried or smoked, depending on how they are prepared . The origin of this name may be due to the fact that the pork leg became known as cooked ham, air-dried ham or smoked ham and thus ultimately gave the name to these "types of preparation".

Boiled ham is usually cured using a spraying process. Here, the product is injected with an approximately eight to twelve percent brine (consisting of drinking water, nitrite curing salt and spices) to keep it juicy . The injection quantity is approx. 20% of the fresh weight of the ham. The cured ham will redden within 24 hours and can then be brewed. Sometimes the product is smoked briefly before or after scalding. Due to its relatively high water content, cooked ham can only be stored chilled and can only be kept for a few days. A variant of the cooked ham is the Prague ham , which is braised or baked in bread dough and is also used for warm dishes. 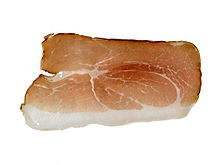 Raw ham is preserved by salting or, more often, curing and then air drying or smoking . The meat matures through enzymatic processes with the participation of lactic acid bacteria , becomes tender and develops a typical aroma. Raw ham can also be made with bones and is then called bone ham (such as Holsteiner Katenschinken or Westphalian ham ). Unmistakable for the consumer, raw ham can also be glued together from individual pieces using the enzyme transglutaminase . Since December 13, 2014, such unrecognizable merged products must be labeled in the EU with the additional note “made from pieces of meat” when describing the food. 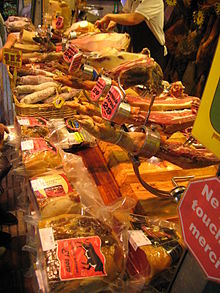 Various serrano ham in the market hall of Roses

Air-dried ham is sliced ​​particularly thin due to its high bite firmness. It is mainly produced in southern European countries where the climate allows slow drying:

Smoked ham has its origin in colder and more humid regions, where the cured meat threatens to spoil due to the high humidity due to mold . Smoking has a preserving effect that protects the surface from fungal attack. At the same time, the smoking process gives the product its desired color and characteristic taste. Typical products are

The word "ham" is also used in combination for other meat cuts / products:

There are also hams from other animals besides pigs:

“Ham” in the figurative sense