from Wikipedia, the free encyclopedia
This is the spotted version , flagged on July 26, 2020 . There is 1 pending change that has yet to be viewed.

The title of this article is ambiguous. Further meanings are listed under Pita (disambiguation) .

Pita is a slightly thicker, soft flatbread made from yeast dough that is widespread from Greece to the Middle East . It is freshly baked several times a day and is used as an accompaniment to almost all meals. In Turkey the name is Pide , in Iran Nān-e Barbarī .

The Oxford English Dictionary first mentions the term in its 1936 edition and gives the origin of Byzantine Greek, from which Latin then took the word "picta". The word referred to in the Greek language as a suffix also used a pate , e.g. B. Kreatopita for meat pie .

By Itamar Even-Zohar was modern Hebrew word "pita" ( pittāh פִּתָּה) in the Yishuv of the early Zionist Jewish immigrants in Palestine as a term for the traditional Arabic bread Chubz (خبز, DMG ḫubz ). In addition, the word was borrowed from Aramaic . Avraham Even-Shoshan and Ernest Klein cite the same origin of the word, with the Aramaic word pittā ' פתא as well as the Hebrew word paṯ פַּת "bread crumb, piece of bread" at the root ptt פתת "(especially bread) break into pieces, crumble" goes back; Klein compares it and a. with the Arabic wordفَتَّ / fatta  / 'cut into small pieces'.

Preparing pita pockets for filling with meat in an American restaurant 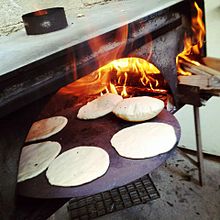 Pita from the charcoal oven in Israel

Depending on the region, it is made from a simple, lightly salted yeast dough, which can contain a little oil or butter and is often pressed in with the finger in a diamond pattern before baking, coated with an egg yolk-oil or boiled flour-water mixture and with Sesame and black cumin seeds are sprinkled. Pita is baked directly on the floor of a stone oven without a mold.

There are numerous variants, e.g. B. Pita with olives or with dried tomatoes.

In Germany, the rather thin, simple Greek pita became known through immigrants in 1958 and the snack bar Gyros Pita.

In Greece and the former Yugoslavia , pita is also a dish similar to the Turkish Börek .

In the Italian region of Calabria there is a round flatbread called pitta. There are two variants: the pitta secca with a hole in the middle and the pitta fresca without a hole. Pitta is often baked as a by-product with other breads. You can cover the dough like a pizza before baking. Covered with greaves , the freshly baked pitta used to be eaten after a pig was slaughtered.