Crescentina is a redirect to this article. For the Roman vestal virgin see Cannutia Crescentina . 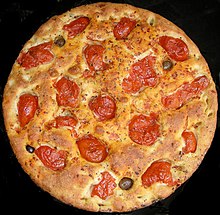 Focaccia with olives and herbs 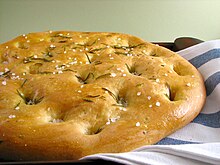 Focaccia ( pronunciation : [ foˈkatːʃa ]), also called Schiacciata [ skiatˈtʃa: ta ] or Crescentina , is a Ligurian flatbread made from yeast dough , which is topped with olive oil , salt and possibly herbs and other ingredients before baking . The origins of focaccia go back to ancient times. The Romans called it panis focācius "bread baked in the hearth" (from Latin focus "stove"), in contrast to panis furnācius, bread baked in the oven. It is sometimes seen as a forerunner to pizza . Focaccia is a Ligurian specialty, especially in the metropolitan city of Genoa . There are variants all over Italy , but they differ from the original recipe.

As a rule, unlike normal white bread, focaccia is not served as an accompaniment to other dishes. It was originally part of breakfast and over time has developed into a separate snack. Common types of focaccia are among others

To prepare the traditional Genoese focaccia, a dough is made from flour , water, salt, yeast and possibly a little olive oil and, after prolonged proving, is formed into flat cakes, into which you make several indentations with your fingers. Then add a little salt and olive oil, herbs to taste, and the flatbreads are baked until golden.

Imitations or significantly modified forms of focaccia sold under different names can be found in various Italian regions.

In South Tyrol and in the small Salzburg municipality of Krimml , which borders on South Tyrol , the Easter Fochaz, known in Krimml as Fochiz , is traditionally the gift of godparents to godchildren at Easter . The bread is baked in such a way that it has a slight hollow in the middle in which colored eggs can be laid.