The title of this article is ambiguous. For the larger type of boiled sausage see yellow sausage , for the cooked sausage type see Knackwurst (Braunschweig) 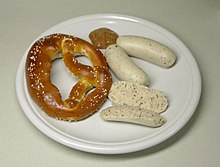 A white sausage is a scalded sausage made from finely chopped veal (now also pork ), pork back bacon and spices. Because the sausage meat is not salted with nitrite curing salt , but with common table salt, the sausage is white in color. There are great similarities to the wool sausage and the stick sausage .

The white sausage is one of the most famous Munich specialties. It is traditionally made early in the morning and consumed in the mornings as a snack at markets and in inns with sweet mustard , pretzels and wheat beer .

Comparable sausages that are served in hot water existed in France as early as the 14th century . In French cookbooks at the beginning of the 19th century they are called "Boudin Blanc" (white sausage).

According to legend, the white sausage in the restaurant "Zum Ewigen Licht" on Munich's Marienplatz was invented by the host butcher Joseph Moser (called "Moser Sepp") by chance on February 22nd, 1857 (Shrove Sunday) while making bratwurst - as a "faulty product". When Moser ran out of Saitlinge (sheep intestines) for the veal sausages while the guests were already waiting, he is said to have sent his apprentice to get new ones. This came back with pork intestines that are too tough and too big for sausages. In an emergency, Moser still filled them with the finished mass, but did not fry the sausages, but rather scalded them in hot water because he was concerned that the pork intestines could burst when roasting.

The white sausage later became known far beyond the borders of Munich through traditional festivals such as the Oktoberfest or the Munich carnival in connection with the city name.

The Munich city archivist Richard Bauer objects, however, that the Munich white sausage probably existed before 1857 and that it is in fact the further development of a much older Maibockwurst. For example, he found an engraving from 1814 showing people from Munich “tipping” veal sausages in a bock cellar, and was able to research an entry in an old butcher's manual that says “that veal sausage is the same as Maibockwurst, only less spicy seasoned and with less pork ".

Munich white sausages are made of beef, pork bacon , cooked calf's head meat , ice snow produced and salt and depending on the recipe with parsley , pepper , lemon powder , mace and onions , and ginger and cardamom flavored. The lean meat content must predominate, i.e. at least 51% veal. In addition to the sinewed meat, there is also the skin , which is made up of boiled, loosened parts of the calf's head with skin, connective tissue from calves and boiled rinds from young pigs. The skin must not be more than 10 percent of the sausage mass, the extraneous water content not more than 25 percent, the fat content not more than 30 percent.

The finished sausage mass is filled into pig intestines and twisted into sausages about 12-15 cm long and weighing 80-90 grams. They are prepared by heating them for 10-15 minutes in 70 ° C, lightly salted water. They burst in boiling water, lose their taste and there is a risk that the intestines will no longer peel off properly.

From the time before the invention of cooling technology, the recommendation stems from the fact that veal sausages should not hear the noon ringing at noon. According to another explanation, they were sold in the mornings in the restaurants to craftsmen who were supposed to make room for more affluent customers at lunch. Today veal sausages are offered all day long, but Bavaria usually only eats them for breakfast, second breakfast and lunch (regardless of the exact time). In the meantime, “Munich white sausages” are also being produced industrially outside of Munich and sold pre-brewed in cans or shrink-wrapped around the world.

Weisswurst is traditionally consumed with sweet or homemade mustard, pretzels and wheat beer. It is especially important to prevent it from cooling down when it is consumed in restaurants, which would quickly discolour the skin. With white sausage, the intestine is not eaten (except for fresh ones). It is either "zuzelt" ("sucked"), ie grasped with the hand and the contents pulled out of the intestine with the teeth. Or it is cut in half lengthways on the plate with a knife and fork, so that the casing remains intact on the underside, and the contents are rolled down crosswise with the cutlery. It is possible to cut the sausage a little laterally or to slit it open with a fork and then detach the skin from the sausage in one piece. A good fresh veal sausage can also be eaten with the skin, like most other sausages with natural casing.

In Lower Bavaria and large parts of Upper Bavaria, white sausages, pretzels, mustard and wheat beer are traditionally consumed as a snack (usually in the morning in a kind of morning pint).

The protection association Münchner Weißwurst planned to have the “Original Münchner Weißwurst” protected by the EU Commission in Brussels as a designation of origin , and in 2004 submitted an application to the German Patent and Trademark Office (DPMA). According to the application, only white sausages produced in Munich could have been offered as "Munich white sausages". Therefore, the Butchers' Association of Bavaria applied to expand the production area to old Bavaria and Swabia . According to the preliminary opinion of the DPMA of February 25, 2005, only the application of the protection association Münchner Weißwurst fulfilled the requirements for the registration of a protected geographical indication. On February 17, 2009, the Federal Patent Court rejected this application in the last instance on the grounds that for decades the vast majority of Munich white sausages had come from other regions of Bavaria and not from Munich.

During the French period in Hamburg (1806 to 1814), Marshal Davout's personal chef developed a luxury version of a white sausage, based on pork made from pork, that was served to high-ranking guests or citizens of Hamburg for their second breakfast. The special thing about this sausage was not only the high quality veal, the fine seasoning and the careful preparation, but also the caviar that was added . There were enough sturgeons in Hamburg at that time, as sturgeons (sterlet) were caught in large numbers in the Elbe .

Karl Friedrich von Rumohr noted this white sausage during a visit to Hamburg for his work “Geist der Kochkunst”, published in 1822, after he complained about the garlic taste of Italian sausages: “A very fine variant of the French white boudins are the veal sausages that I put in a hamburger Got to know restoration. Even if I generally consider it a mistake to mix the meat of land and sea creatures, I can say that this apparently dodgy refinement of the sausage meat is a culinary delight of special quality. "

Also in an early edition of the “ Appetite Lexicon ” by Habs and Rosner, the white sausage is mentioned under the keyword sausage after groats, blood, zervelat, pea and garlic sausage, “whose Bavarian variant is quite filling, while the Hamburg white sausage is more unusual Delicacy and delicacy ”.

In his dictionary of culinary arts, Alexandre Dumas , after praising the heroic character of Marshal Davout , refers to the “Boudin hambourgeois” and demands: “May my esteemed gourmets from Normandy insist on consuming their Boudin blanc with beer, I ask for a glass of white Burgundy with this tightly stuffed intestine! "

In the course of the 19th century, the Hamburger Weißwurst fell into oblivion, not least because those citizens who had opened up to French customs were now silent and tried to erase all memories of their collaboration , even if only culinary ones .

The Silesian white sausage ( Silesian slice white sausage ) is traditionally made in December and consumed on Christmas Eve and New Year with a typical Silesian sauce (for example fish sauce or gingerbread sauce ). The sausage itself consists mainly of veal (nowadays often replaced or supplemented by pork ) and pork bacon , both of which are extremely finely chopped with ice and refined with lemon spices and white wine. The meat mass is filled into the small intestine of pigs and can be scalded for better shelf life. The finished sausage is slowly heated in water or fried in butter. As a typical Silesian Christmas dinner, this is then served with potatoes , mashed potatoes or brown bread and sauerkraut . This also includes smoked meat or smoked pork belly.

Unlike the Silesian veal sausage, the Polish veal sausage ( Kiełbasa biała ) typically contains garlic and marjoram , the latter in its Wielkopolska , Galician , Pomeranian and Kujaw variant. It is also a bit coarser and is not only made from beef or veal , but also contains pork as standard . It is known and widespread in Silesia. Polish veal sausage is a central part of the Polish Easter breakfast . Bread, butter, grated beetroot and horseradish go well with the hot sausages . Polish veal sausage is also often eaten as a filler in Żur , a traditional sourdough soup in Polish cuisine , or as a main course , often with Polish sauce and side dishes.