The marjoram ( Origanum majorana ) is a species of plant that belongs to the genus Dost of the mint family (Lamiaceae). The wild form comes from Asia Minor (Cyprus and Turkey), while Origanum hortensis is the garden form. It is an important spice plant , which - according to their common purpose - even sausage herb called. Other popular names for marjoram are bath herb, roast herb, roast herb, garden major, kuchelkraut, tripe herb, mairan, meiran, mairal herb, mairon, miran, mussarol. The (real) dost or oregano, also used in the kitchen, belongs to the same genus Dost ( Origanum ) . 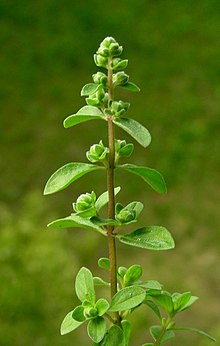 Budded inflorescences and opposite leaves

The marjoram grows as a perennial herbaceous plant to subshrub , reaches stature heights of up to 80 centimeters and is often cultivated like an annual plant . Plant parts are often hairy gray. The opposite leaves are divided into petiole and leaf blade. The elongated to almost circular, simple leaf blade is up to 2.5 × 2.5 cm in size with grayish-white short, pressed hair (trichomes).

There are many flowers and bracts in compact, almost spherical or square, spike-like , approximately 6 × 4 millimeter large inflorescences . The broad, obovate and rounded bracts are greyish-white and dotted with glands. The hermaphrodite, zygomorphic flowers are five-fold with double perianth . The 2 × 1.5 millimeter calyx is downy hairy and dotted with glands. The white crown is 3 to 7 millimeters in size and has two lips. The lower lip is three-lobed. The flowering period extends from June to September.

The almost spherical partial fruits have a diameter of about one millimeter. 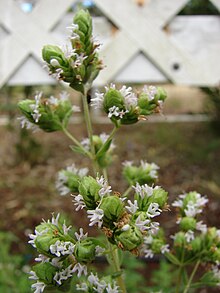 A honey bee on a marjoram flower

With a cultivation area of ​​500 to 600 hectares, marjoram is one of the most important aromatic plants cultivated in Germany after parsley . Due to the favorable location conditions, the main focus of German marjoram cultivation is traditionally in the region north of the Harz around Aschersleben in Saxony-Anhalt .

A relative of marjoram, Syrian oregano ( Origanum syriaca ) is used in Western Asia , such as Israel, Jordan and Lebanon, for cooking and grilling. There the herb is called Zahtar , Zaatar or Za'tar. Zahtar is much more aromatic than European marjoram and the taste mixes with oregano. In areas where this herb is not widespread, the name is also used to denote other aromatic herbs. In Israel and Jordan a mixture of spices is produced, which is also called Zahtar (see spice sumach ). In Europe, this West Asian marjoram can be replaced with a mild variety of thyme or savory .

Aphrodite , the goddess of love and beauty, called marjoram a symbol of bliss. In Greece it was therefore customary to put garlands made of marjoram around the necks of newlyweds. Hymenaios , the Greek god of marriage, was often depicted wearing a marjoram wreath.

Marjoram comes from Asia Minor or Cyprus . Since it is a popular spice, it is now grown not only in Mediterranean countries, but also in Central and Eastern Europe; However, good quality requires a fairly warm and Mediterranean climate.

Locations and distribution in Central Europe

Its home is the Mediterranean area.

In Central Europe it is occasionally grown as a medicinal and aromatic plant and sporadically sporadic, but always inconsistent.

The content of essential oil depends strongly on the soil , climate and season and can fluctuate between 0.7 and 3.5%, it is highest between the beginning of flowering and full flowering. The main aromatic component is a bicyclic monoterpene alcohol, 'cis' sabinene hydrate (max. 40%); there are also α-terpinenes , 4- terpineol , α-terpineol, 4-terpinenyl acetate and 1,8-cineol in significant amounts. Phenols , which are characteristic of the related oregano, are completely absent in marjoram.

The thin, yellowish green or pale yellow, penetrating smelling and spicy, mild tasting marjoram oil can be obtained by distillation with water ; it consists mainly of terpinenes .