Spelt is a redirect to this article. For the Dutch painter see Adriaen van der Spelt .

This article covers the grain spelled; for other meanings, see spelled (disambiguation) .

Spelled ( Triticum aestivum subsp. Spelta ) or spelled (also: Spelt , Fesen , Vesen or Schwabenkorn ) is a type of grain from the wheat genus and a close relative of today's common wheat . There are very many mixed forms and transitions between “modern” wheat and spelled, because in some regions both were grown together and also crossed with one another.

Origin (red) and cultivation area (green) of the spelled. The red oval indicates the approximate region where the spelled could have originated through mutation . 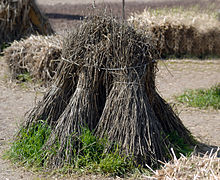 For drying spelled was after mowing in sheaves placed 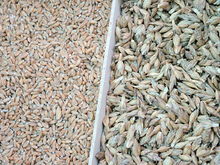 Spelled, left without, right with husks

The oldest spelled finds come from western Armenia and the valleys of the Ararat Mountains (6th to 5th millennium BC). Other finds are from Bulgaria (3700 v. Chr.), Romania (Hărman, Koros Culture ), Poland and South Sweden (2500-1700 v. Chr.) And Denmark (1900-1600 v. Chr.) In the Neolithic period was Spelled is grown in Central and Northern Europe (especially in the Alpine region ), which is proven by archaeological finds. From 1700 BC BC it occurred in today's German-speaking Switzerland . In the 18th century, spelled was an important commercial grain. The word Dinkel appears in the place names Dinkels bühl and Dinkel sharte as well as their coat of arms (three ears each). This shows how much this grain was valued.

The tradition that part of the spelled is harvested before it is ripe , i.e. when it is still green, comes from the need for nutrient-rich staple foods for field work in summer. The unripe grain, called green spelled , cannot be stored, which is why it is kilned , ie dried. Green spelled cannot be baked, it can be processed into soups or green spelled cakes .

In the 20th century, the cultivation declined because of poor crop yields. In addition, the husk grain is difficult to process and technically complicated. In recent times this grain has experienced a certain renaissance, especially in the organic sector , probably also because it is valued by many allergy sufferers . Spelled is now a popular alternative to other types of wheat, especially for baby and child food. Spelled is also an integral part of modern Hildegard medicine , which refers to the medieval mystic Hildegard von Bingen .

In Central Burgenland, too, spelled was one of the grain types that used to be strongly represented. Due to the complex cultivation, cultivation declined, but has been increasingly represented again since the 1980s. For this reason, the cultivation as Mittelburgenland spelled was included in the Austrian register of traditional foods , and the area was included in the enjoyment region of Austria . The Franckenkorn variety was bred by Peter Franck , the name has nothing to do with the Franconian region .

Spelled does not tolerate as much nitrogen in fertilization as wheat. In terms of yield, spelled lags behind wheat, but it can withstand a harsher climate than wheat . Its earlier claimed better disease resistance than common wheat no longer applies to today's varieties. Most of the spelled varieties are susceptible to extreme susceptibility to powdery mildew (Blumeria graminis) and brown rust (Puccinia triticina) . Ergot , on the other hand, represents a lower risk.

Three types of spelled are of economic importance (according to Frank 2006):

UrDinkel is a common brand in Switzerland for spelled from specified cultivation. It guarantees the exclusive use of old Swiss spelled varieties that have not been crossed with modern wheat.

In contrast to wheat and barley , the grain of the spelled is firmly fused with the husks . This means that it is better protected, but processing requires an additional processing step - it used to be peeled ( tanned or rolled ) in a "tanning process" . This is a grinding process ("underrun peeling process") in which the distance between the grinding stones was chosen to be larger so that the grain was freed from the husks but not already crushed. In modern grain mills , spelled is peeled with the help of rubber roller peelers or vertical grinders.

In the field of livestock feeding, spelled only plays a certain role in horse breeding, where it has been experiencing a renaissance for several years. Either the whole spelled is used (including the spelled) or only its spelled.

"Spelled rice" is the name given to peeled and ground spelled grains. This special pre-treatment gives the grain rice-like properties and can also be further processed in the same way. 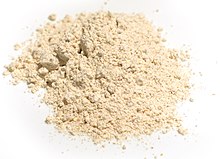 Typical products made from spelled flour are spelled noodles and spelled bread such as Swabian soul and Knauzenwecken .

Although spelled is high in protein , dough made from spelled flour is more difficult to handle compared to wheat dough. The baking properties of spelled and wheat dough are mainly determined by the proteins gliadin and glutenin . Spelled contains proportionally more gliadin, which makes the dough supple, but less glutenin, which ensures a stable gluten structure in the dough. Therefore, spelled doughs are pliable and easily stretchable, but less dimensionally stable and also sensitive to tearing, which is why there is a risk of over-kneading. The glutenin structure can be stabilized by adding small amounts (approx. 0.008%) of ascorbic acid , which through a series of chemical reactions favors the formation of three-dimensionally cross-linking disulfide bridges . In the organic sector, 0.1% acerola cherry powder can be used instead, which also contains ascorbic acid as an active ingredient.

Baked goods made from spelled flour become dry and hard after a short time compared to wheat and rye products, as they can bind less water due to the comparatively low swelling capacity of the protein and carbohydrate components. Also spelled doughs are often dry due to the difficulty of processing performed . The use of dough precursors such as swelling pieces and sourdough can counteract this problem by breaking down the flour components to improve the water retention capacity and thus also the freshness of the baked goods.

Spelled is sometimes said to have particular health benefits compared to all other grains. The most important historical source are descriptions by Hildegard von Bingen in her book Physica .

However, to date there are no scientifically proven findings about better tolerability of the spelled. However, there are cases of wheat intolerance in which spelled is tolerated as a substitute grain. The basis for this phenomenon is unknown, so there is still a need for research in this area.

It is scientifically proven that spelled is not tolerated in celiac disease because it is not gluten-free .

If there are also certain differences between spelled and wheat with regard to the content of fat and fatty acids, amino acids, vitamins and minerals, it is questionable whether these differences go beyond the natural range of fluctuation and whether these differences even come into play with today's usual consumption habits. However, the silica content of spelled is significantly higher than that of wheat. There are also very clear differences in the gluten composition, because unlike wheat, spelled gluten does not contain ω-gliadin. This difference is also used in the laboratory for the biochemical differentiation of spelled and wheat.

The composition of spelled naturally fluctuates, both depending on the variety, the environmental conditions such as soil and climate, and the cultivation technique depending on fertilization and crop protection.

Details per 100 grams of edible portion: