Spelled straws, immediately before harvest, for the production of green spelled 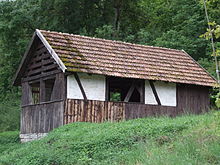 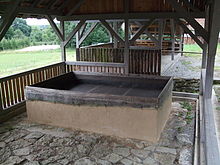 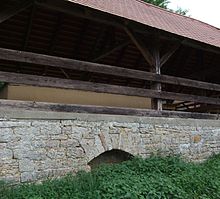 Pot-hole for the fire under a griddle pan

Green spelled (also green grain ) is the grain of the spelled that is harvested half-ripe and artificially dried immediately afterwards. Originally, the spelled was harvested in response to periods of bad weather, which destroyed the harvest, before maturity (in the so-called " dough maturity " with about 50% grain moisture). Since the dried kernels - boiled with water - were tasty, the tradition developed to harvest part of the spelled as green grain.

As winter grain, the spelled intended for green spelled is brought in at the end of July and then kilned - traditionally over a beech wood fire or modernly in hot air systems. This preserves the green spelled (only approx. 13% grain moisture) and maintains its typical aroma. Before further processing, the green spelled must be freed of its husks in a peeling machine or a tanning process (“tanning” of the grain). Some of the husks are used as a filling for small pillows, which are said to have a healthy sleep-promoting effect. Green spelled is used in the form of pearl barley , semolina , flakes or flour as a soup, for patties and dumplings . The rest is used as fodder. While spelled harvested when ripe is suitable for baking bread, green spelled flour is not suitable for this.

By kilning at 120–150 ° C on the kiln, a special green spelled kiln, the green spelled gets its specific taste from the heat and the beech wood smoke . After drying, high quality is shown by an olive green color of the green core. If, on the other hand, it has already turned brown, i.e. roasted, it is considered inferior. The glue protein of the green core is changed by drying. The flour made from it can no longer be baked. Green spelled is used whole or ground in soups and as a patty .

According to various reports, green spelled was first produced in southern Germany several hundred years ago. Grünkern was first mentioned in a document in 1660 in a cellar invoice from the Amorbach monastery . Even back then it was used as a soup. Initially, the residual heat from the bakery was used for drying.

The main harvest season at the end of July also found its way into dialect farmers' rules, for example “Christine, Jagowi, Sankt Anne is Ern! / Do n't cut any grain, / so cut no grain . "( Christophorus , Jakobus , Sankt Anna is harvest! / We don't cut grain, / so we cut green spelled.)

Its widespread use continued until the 1930s, when it was considered a "German soup fruit" and a substitute for grain imports from abroad in the “ Third Reich ” , which was concerned with self-sufficiency . With the improved food supply in rural areas since the years of the economic miracle , its prevalence declined, but the tradition of production remained or was revived. But food manufacturers such as the Knorr company in Heilbronn (today Unilever Deutschland GmbH) also process green spelled: ground or crushed, green spelled is still an important component of instant soups today.

Cultivation region and protection of origin

A stretch of land in North Baden is called the “home of the green core”: the building land . The "Fränkische Grünkern" produced here has been protected as a protected designation of origin throughout Europe since April 8, 2015 . Sometimes Grünkern is also called "Badischer Reis".

In the building land, many villages still have green kernel kilns , which were built outside of the local housing development due to the strong smoke development.

The composition of green spelled naturally fluctuates, both depending on the variety, the environmental conditions (soil, climate) and the cultivation technique (fertilization, plant protection).

Freekeh is a similar grainproduct madefrom durum wheat by roasting and is common in North Africa and the Eastern Mediterranean.