Knorr is a food manufacturer in Heilbronn known for its instant soups , which is now part of the Unilever Group. In addition to soups, Knorr's product range includes spices such as aromatics , sauces, side dishes, bouillons, salad dressings , other cooking ingredients, smoothies , frozen food and, increasingly, ready-made meals.

The company was founded in 1838 by Carl Heinrich Theodor Knorr (1800–1875) in Heilbronn. On August 29, 1838, the founder opened a general store (Kaiserstraße 7), and on September 28, 1838, he received the concession to build a chicory factory for the production of coffee substitutes from the chicory roots in front of the bridge gate (today's station district). The factory with 53 workers became the largest factory in Heilbronn. In 1855 it was sold to August Closs, the brother of the founder's son-in-law. In 1857 Knorr founded a cloth factory on the Hefenweiler, which he had to close in 1858 due to unpaid debts. Knorr then founded the company CH Knorr wholesale business in rice, barley, sago and regional products in Sülmerstrasse. The exact time when this company was founded is unknown. In 1862, according to the Heilbronn address book, Knorr was an “agent in regional products”; the wholesale business is mentioned in 1868, but it probably existed a few years earlier. The company headquarters were moved to Innere Rosenbergstrasse (today: intersection Wilhelm- / Rollwagstrasse) by 1872. In 1875 the factory was renamed CH Knorr - Mühlenfabrikate, Landesprodukte, Fabrik von Soupstoffe .

Knorr company headquarters in 1903, at the extreme southern end of Heilbronn

Knorr had initial successes exporting dried fruit to Hungary. Around 1870 the factory began producing flours from green spelled, peas, lentils, beans and tapioca . A beehive , a symbol of a “hardworking people”, became the company's trademark. In 1873 the production of soup preparations made from legumes, vegetables and spices began. After the company's founder died in 1875, the company was passed on to his sons Carl Heinrich Eduard Knorr (1843–1921) and Alfred Knorr (1846–1895). They laid experimental gardens to improve the soup ingredients and with the construction of a mill in the south quarter in 1884 the foundation stone for the long-term company premises. In 1885 packing stations were opened in Austria and Switzerland in order to avoid an increase in import duties in these countries. Knorr ready-to-eat soups were not only offered as powder in bags, but from 1886 as bars, from 1889 in sausage form (the well-known pea sausage ), in 1897 as tablets and in 1910 in the form of soup cubes .

Since 1892 there was also an own pasta production, in 1908 soup seasoning was also produced and from 1911 meat stock cubes. Fridtjof Nansen's North Pole expedition in 1893 lived on Knorr products, and at the Heilbronn trade and industry exhibition in 1897, Knorr presented a pressed vegetable block of one cubic meter that made 70,000 servings of soup.

After Alfred Knorr's death in 1895, Carl Heinrich Eduard Knorr took over sole management of the company. In 1899 it was converted to a stock company. The two Knorr families initially held shares of 40 percent each. In the period that followed, smaller shares were given to senior employees and Knorr relatives. The previous authorized signatories Christian Eberhardt (1857–1939) and Gustav Pielenz (1862–1944), who remained on the management board until 1925 and 1936, respectively, were appointed to the management board of the stock corporation . Carl Heinrich Eduard Knorr was a member of the supervisory board from 1899 to 1905, and in 1905 he joined the management board for seven years. In 1912 he moved back to the supervisory board.

When the First World War broke out on August 1, 1914, 130 Knorr workers were drafted into army service, and production was then increasingly taken over by women. The company was placed under the army administration. The war brought lucrative contracts; on August 18, 1914, an order for 7.5 million field rations was received. The workforce, which had grown to 1,300 workers by the end of 1914, delivered over 200,000 field rations a day, which bore names such as Hindenburg soup or Ludendorff soup , owing to the spirit of the times . The company's branches in France and Italy were confiscated by the war opponents, for which Knorr received in 1917 the British shares of the Berlin Mondamin GmbH confiscated by the German Reich .

The distress after the end of the war was also felt in the company: in 1919, production was idle for several weeks due to a lack of coal, the workforce fell from 1,450 to 300 people.

It was only after overcoming inflation in 1923 that the company's history took a positive turn again. Deutsche Maizena-Werke GmbH , founded in Hamburg in 1916 , acquired 75 percent of the shares in Knorr subsidiary Mondamin in 1922, and thus around 10 percent of Knorr shares. At that time, CH Knorr AG was listed on the Berlin, Frankfurt and Stuttgart stock exchanges. New branches were opened in Switzerland in 1927, in New York in 1928 and in Antwerp in 1932 .

After the beginning of the Nazi dictatorship in 1933, state price regulations on agricultural products had a favorable effect on Knorr. In 1938, a peak was reached with 3000 employees. 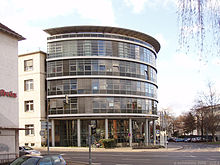 After the beginning of the Second World War, the war economy again impaired production considerably. From 1940 oat products and hard noodles could only be sold in bulk, barley flour , pasta and other products were only available for large producers on collective purchase orders. In March 1940, NSDAP district leader Richard Drauz demanded a seat on the supervisory board, but the Knorr board of directors denied him. As in the First World War, parts of the workforce were drafted and raw materials were scarce. The Heilbronn factory was hit by bombs for the first time during the air raid on September 10, 1944, and half of the factory was destroyed in the air raid on Heilbronn on December 4, 1944. Although the oat mill was put back into operation on January 12, 1945, operations were stopped in mid-March 1945 due to the approaching front. From 6th to 8th April 1945 the factory site was fought over in the defense of Heilbronn.

Immediately after the end of the war, production started again in May 1945. By September 1945, 650 employees were counted again. The factory was under the administration of the military government until December 1948. Sales manager Paul Meyle , who has been with Knorr since 1929, moved to the town hall of Heilbronn in 1945 due to a lack of salable products and in 1948 became mayor of the city. In 1951 Maizena took over further Knorr shares from the Oetker Group and increased its stake to 32 percent, in 1958/1959 Maizena became the majority shareholder with a stake of 58.4 percent and implemented the conversion of Knorr into a GmbH . In 1958, Alexander Knorr (1889–1978) was the last Knorr to leave the company's board of directors. Despite the factual change of ownership, the name Knorr was retained as a brand name. The last Knorr-family member in the company was until 1976 the authorized Carl Heinrich Knorr Clemens (1913-1985), a great-grandson of the founder.

In 1961, Knorr and Stocki launched an instant mashed potato , which Frigemo still produces today. In 1964, Nippon Consomme Co., Ltd., a subsidiary of the Ajinomoto food company , together with the US CPC (Corn Products Company) brought knot soup onto the Japanese market. The following year, Nippon Consomme was renamed Knorr Foods Co., Ltd. renamed.

In Switzerland, Knorrli , a male with a pointed cap, wooden shoes and a wooden spoon in his left hand, has been used as an advertising figure since the 1940s (designed by Hans Tomamichel ). The advertising figure Knorri , an ox standing on two legs with a wooden spoon in his right hand, was popular in Germany in the 1960s , as was the figure Stocki , a half-peeled potato with a flat cap, which advertised the mashed potatoes of the same name. The company was able to sign the nationally known footballer Franz Beckenbauer for advertising films shown in the cinema during this time .

In 1969 Maizena built what was then the most modern, fully automatic soup factory in Germany in Heilbronn, and in 1987 the company headquarters was relocated from Hamburg to Heilbronn. At that time, 1,800 people were employed at the Heilbronn site. In 1988 the exhibition 10000 Years of Soup - 150 Years of Knorr on the company's history took place in the Heilbronner Harmonie .

In 1998 Maizena (itself a subsidiary of the CPC group) became the Bestfoods group, and in autumn 2000 Bestfoods was taken over by the British-Dutch group Unilever . In October 2016, Unilever announced that it would close the development center in Heilbronn and the 220 employees will work in Holland in the future.

In October 2019, Unilever announced plans to close the Knorr plant in Heilbronn with a further 550 employees, without a specific timetable being given. A location contract expires at the end of 2020. According to Unilever, there could perhaps be a future for the plant if “radical cost savings” were achieved. After negotiations, an amended collective bargaining agreement was signed in June 2020, which provides for location and employment security until 2030, in return, among other things, lower wage increases.