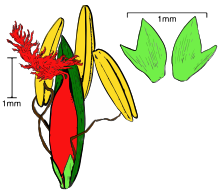 A glume is a bract in the spikelet , the partial inflorescence of the sweet grasses (Poaceae) and the sour grasses (Cyperaceae). Husks are usually dry-skinned and protectively surround the flowers .

The sour grass has only one husk, it is the wrapper of every flower.

In the sweet grasses there are several husks in the spikelet. The shape and number of the husks are often characteristic determinants for the grass species.

During threshing , the husks are removed from grain that is to be processed into grain products and together with pods, awns , seed coats and stalk parts form the chaff . 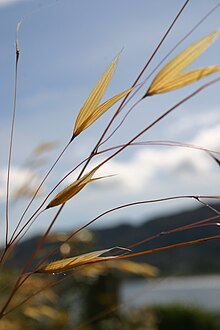 Glumes remain on the plant 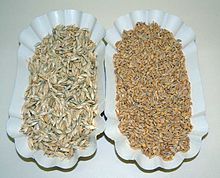 Einkorn on the left in husks, on the right peeled

Two glumes or glumae (singular: gluma ) sit at the base of the spikelet. Before flowering, in the bud stage, they envelop the entire spikelet like bud scales. Usually two glumes are formed, a lower and an upper. More than two are never formed. The glumes, sometimes referred to as the third and fourth glume in some species, are lemmas with greatly reduced florets. In some species the number of glumes is reduced: In the lolch species ( Lolium ) the lower glume is absent, only in the terminal spikelets both glumes are present. In the genus of the fingergrass ( Digitaria ) the lower glume is reduced to a scale, in the bristle grass ( Nardus stricta ) both are reduced to small, pointed scales. Size, shape, veins, consistency and hairiness are very diverse. The simplest form is lanceolate, multi-veined, membranous and green, with the lower glume usually shorter than the upper.

A lemma or lemma (palea inferior) is at the axis of the spikelet. Depending on the number of flowers in the spikelet, there are one to several lemmas, each of which, together with a palea, envelops a single flower that arises in its axilla. The lemma is the bract ( bract ) of a flower. Lemmas are much more diverse than the glumes. In the simple form they are similar to the glumes. In the case of coarse-skinned lemmas, a crevice may be formed, for example in various millets ( Panicum , Setaria , Echinochloa crus-galli ). In many plant families , the lemmas bear awns . This is usually an extension of the median nerve. The awn can be straight or kneeled, or the lower part can be turned like a wood chip. The formation of several awns per husk, which then emerge from the lateral nerves, is rare.

The palea or palea (Palea superior, more rarely also glumella) stands on the axis of a flower within the spikelet. One palea is formed per flower. There are two hypotheses about the origin of the palea: according to one, it is the front leaf of the flower, according to the other, it emerged from two leaves of the outer circle of perigone . The Palea sitting adaxial the ovary , so to Ährchenachse out. It is much more uniform than the other husks: mostly two-veined, narrow, elongated and with two points at the upper end. They are often clearly keeled, with a groove being formed between the two keels of the two nerves. If the flowers are reduced, the palea is often stunted; very rarely, if the flowers are fully developed, it is stunted, for example in the genus of the ostrich grasses ( Agrostis ).