Bristle grass ( Nardus stricta ), also deer hair , Bürstling , compartment and Narde known, is the only type of single genus Nardus the tribe Nardeae within the plant family of grasses (Poaceae). It is widespread in Eurasia . 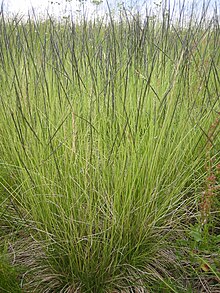 Typical habitus of this clump grass

The bristle grass is a hibernating green, perennial herbaceous plant that reaches heights of between 10 and 30 centimeters. It grows in gray-green, board-like clumps . The dense, firm clumps are enveloped by the yellowish leaves of the previous year. The stalks are thin and rough under the ears .

The leaves are divided into leaf sheath and leaf blade. The leaf sheath has a joint where the lower leaves bend horizontally outwards. The pointed ligule is up to two millimeters long. The leaf blades are bristly and at the same time wild and tightly tufted (so-called "punk head").

The flowering period extends from May to July. The single-flowered, 7 to 15 millimeters long spikelets are narrow, one-sided, slightly convex and initially bristle-shaped (hence the name). The spikelets are purple to bluish. There are no glumes. The lemma is short-awned and very dark. When ripe, the spikelets are obliquely comb-shaped.

The bristle grass is a hemicryptophyte . A dense scattered blanket is created around the eyrie, as the dead leaves are difficult to decompose. The leaves are bristly, so there is probably a peinomorphosis as an adaptation to the soil's lack of mineral salts. The up to 5 cm long rhizome causes vegetative reproduction . It is short, creeping and represents a board-shaped sympodium that is bent in a zigzag shape at the annual sections . There is an arbuscular mycorrhiza , the symbiotic partner is probably the Glomus intraradices fungus, which is typical for corresponding grass symbioses . The species consumes raw humus . It has roots up to 80 centimeters deep.

The flowers are feminine and windy .

The grain ( caryopsis ), which is surrounded by an air space, is covered by the remaining cover and palea. It spreads as a rain swallow and because of the rough lemmas also Velcro spreads , as well as random spread with the ingestion of ungulates . Fruit ripening is from August to October.

Borst grass is widespread in Europe, the Caucasus , Eastern Siberia, Mongolia and Turkey . It occurs in large parts of Europe. In North Africa , it is native to Algeria and Morocco , but is also found in the Azores . The arctic grass is a neophyte in North America and Greenland .

In Austria the borst grass is common in all federal states ( rarely in Vienna ) from the (colline) montane to sub-alpine altitude .

The lime-avoiding plant prefers acidic grasslands as a location , especially pasture lawns (in forests it is a relic of grazing ). It occurs only on periodically (or physiologically) dry soils .

Bristle grass is sensitive to liming and fertilization. It is a raw humus pointer and dry peat maker. The grass indicates extensive grazing. It is only eaten by the cattle when it is young, in older stages it is spit out as "corpses of grass after plucking. It has no feed value for the grazing animals. The stiff-necked bristle grass, also known as "Fachs", is also used as stable litter (the harvesting of grass, hay and litter was also called "Fächsen" in the past). It is valued as a paver on gray dunes. Bristle grass is favored by grazing and long blankets of snow.

The name Nardus was arbitrarily transferred to this genus by Linnaeus . In ancient times, nardos (from Indian) was a valerian plant that produced scented oil (nard) ; later this was also used to describe the aromatic-smelling basic axes of various bearded grass species.