The title of this article is ambiguous. Further meanings are listed under Einkorn (disambiguation) .

Einkorn ( Triticum monococcum ), also known as eyes or small spelled , is one of the oldest domesticated cereals . Einkorn comes from wild wheat ( Triticum boeoticum Boiss.), Which , unlike einkorn, has a brittle spikelet fork ( Rhachis ). Einkorn was considered a forerunner of Emmer , Dinkel and seed wheat , was found to through a genetic test that Emmer of Wilder Emmer derived from the Southeast.

The area of ​​origin of domesticated einkorn is disputed. On the basis of genetic studies of einkorn from Turkey , the Caucasus and Lebanon, Heun and others argue for an origin from southeastern Turkey ( Karacadağ ), while Martin K. Jones et al. (2006) and others see the origin in the southern Levant , where emmer, einkorn and barley have been located since the pre-ceramic Neolithic A 8000-7700 BC. Were domesticated. The evidence is questioned, however. Einkorn, which is certainly domesticated, comes from the pre-ceramic Neolithic B (6700-6000 BC), for example from Jericho and Tell Aswad II.

On the Upper Euphrates domesticated einkorn was found in the pre-ceramic layers of Mureybit , Nevalı Çori (7200 BC), Jerf el Ahmar , Abu Hureyra (7800-7500 BC) and Dja'de . From settlements like Cafer Höyük , Nevalı Çori and Cayönü , however, there is also wild einkorn, which indicates the importance of this plant as a collector plant as early as the Mesolithic and Epipalaeolithic .

Einkorn and emmer are among the most important cultivated plants in ceramic tape . Binkel wheat ( T. compactum ) only gained influence in the late ceramic band . Einkorn was an integral part of agricultural production in the linear ceramic culture (between 5700 and 4100 BC), which, due to general climate change , was able to assert itself as a Neolithic culture with agriculture and cattle breeding in Central Europe . This culture with its almost village-like settlements initially used the low-lying loess areas for their agriculture. In addition to einkorn ( Triticum monococcum ), emmer ( Triticum dicoccum ), spelled (Triticum aestivum subsp. Spelta), flax (Linum usitatissimum) and the legumes lentil and pea were grown , presumably in Schwendbau . Geoclimatic and geoecological research indicate a very mild climate during the spread of the ceramic band culture in Central Europe.

Remnants of einkorn were found among other things in the Stone Age glacier mummy " Ötzi " in the Alps. 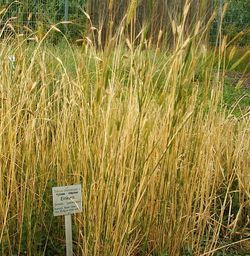 Einkorn - on the left in husks, on the right peeled

Einkorn is relatively undemanding in terms of the quality of the soil. In addition, it is resistant to many pests such as root rot , blotch or ergot - fungal and is better able to prevail against the competition of arable weeds than modern wheat varieties. However, the yield is considerably lower than that of modern wheat varieties; yields of only 1.2 to 2.1 t / ha are achieved on sandy soils .

While the cultivation of einkorn became economically almost insignificant in the 20th century, today einkorn is e.g. B. in Switzerland , in Germany, in Austria in the Waldviertel , in Italy as a local specialty in Piedmont and the province of Brescia and in Turkey. Processed products such as pasta, bread and beer made from einkorn are also increasingly being offered.

Einkorn contains more minerals and amino acids than this, although it is much less profitable than seed wheat . A high yellow pigment content of beta- carotene gives the einkorn flour a yellowish color. Beer can also be brewed with einkorn malt as an ingredient .