The lentil or Erve ( Lens culinaris ), also known as kitchen lentil , is a species of plant from the genus Linsen ( Lens ) from the subfamily of butterflies (Faboideae) within the legume family (Fabaceae or Leguminosae). It probably descends from the wild Lens orientalis .

The lentil grows as an annual herbaceous plant and reaches stature heights of 10 to 50 cm (75). The thin and ribbed stem, which is branched from the base, is downy hairy. A small tap root is formed.

The alternate leaves are pinnate in pairs with 3 to 8 pairs of leaflets. The almost sessile, rounded or pointed to pointed, usually entire-margined leaflets are 6 to 20 mm long and 2 to 5 mm wide. The runny rachis ends in a tendril . The 3 to 7 mm long stipules and the whole leaves are more or less hairy white.

The flowering period extends from April to September. The racemose , axillary inflorescences contain only one to three (four) flowers. The hermaphrodite and stalked flowers are zygomorphic and five-fold with a double flower envelope . The calyx with five priemlichen lobes is more hairy, like the flower stalks. The white or blue to purple-colored petals are the typical shape of the butterfly flower , which is 4.5 to 6.5 mm in size. The short-stalked ovary is bare.

When ripe between May and September, the brownish, glabrous and tipped, puffed, small legume is elongated and 10 to 15 mm long. The round, flat, about 1 to 2 mm thick seeds have a diameter of 3 to 8 mm. They are greenish, beige to brownish, reddish, orange or black.

The lentil thrives best on marly or sandy , calcareous, loose loam soils , which can be quite shallow.

The lentil is rarely grown in Central Europe today , it is very rare and mostly inconsistent in rubbish areas or on fallow land .

Only the seeds are consumed. Lentils are mainly grown in Spain , Russia , Chile , Argentina , the USA , Canada and the Middle East . In India alone there are over 50 varieties. In Germany they are grown in small quantities on the Swabian Alb (" Alb-Leisa "), in Hesse and in Lower Bavaria . The barren soils of the Swabian Alb are particularly suitable for growing the undemanding lentil. 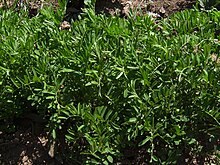 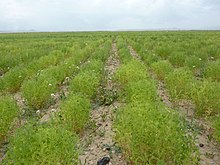 Lentils are usually grown as a mixed culture together with grain (e.g. with oats or barley), which provide the necessary climbing support. But camelina has proven to support fruit. Both are harvested together with a combine harvester. The harvest consists of a mixture of grains and lentils, which have to be separated in a technically complex process. Small fragments or adhesions from the grain can remain, which is why lentils are not always 100% gluten-free . Lentils can also be grown as legumes on poor soils and under unfavorable climates, but the overall harvest yields are too low and at the same time the technical effort is too high to be grown in Germany on a large scale at competitive prices. Therefore, lentils are grown almost exclusively in organic farming in Germany . The yields fluctuate between 200 and 1000 kg per hectare, depending on the weather and growing conditions.

In 2018, 6.3 million tons of lentils were harvested worldwide. The ten largest producers collectively harvested 90.8% of the world's harvest.

Common in the trade are:

In German dishes, lentils are often cooked into a soup with greens and sausage . A little vinegar is also added regionally , which reduces the foam when cooking and supposedly improves digestibility. “ Lentils with spaetzle and string sausages ” is a specialty in the Swabian region .

Lentils are easier to digest than peas or beans and have a high protein content of 25 to 30% in the dry matter , which makes them a valuable and inexpensive food, especially with temporary fasting or a permanent vegetarian diet. Their high zinc content , which plays a central role in metabolism, is also remarkable . Because they're smaller than other legumes , they also take less soaking and cooking time.

Unpeeled lentils can also be germinated and then processed. There is evidence that germs can break down nutrients better. The germination process multiplies the level of B vitamins in lentils and other seeds. Lentil germ also contains vitamin C as opposed to the dried seeds.

The lens is likely derived from the wild lens orientalis from Asia Minor , which is common in western Asia. In the Upper Paleolithic and Mesolithic , lentils were used as food by northern Mediterranean hunters and gatherers. Finds from the Mesolithic layers (lithic assemblages VIII, IX according to Perlès) belong to the species Lens nigricans or Lens ervoides . Domestication is not to be assumed. However, the occurrences decreased increasingly due to the rise in sea level.

The lentil (Lens culinaris) has been one of the main useful plants of crops from the fertile crescent since the beginning of agriculture in the Neolithic . It was found in the cave of Franchthi in Greece as early as the earliest Neolithic layers, around 7000 BC. To date. Lentils have also been found in Bulgaria. Lenses have been used in Central European linear ceramics since the earliest phase, around 5500 BC. Proven.

In ancient Egypt lenses were one of the staple food . They are also mentioned in the Bible : “ Jacob gave him bread and the lentil dish , and he ate and drank and got up and went away. So Esau despised his firstborn. "( Genesis 25: 29-34  Lut )

Raw lentils contain indigestible or even toxic ingredients ( lectins and others) that are rendered harmless by cooking. If the lentils are soaked before cooking, the content of indigestible ingredients is reduced.

The composition of the ingredients of lentils naturally fluctuates, both depending on the variety and due to different environmental conditions (soil, climate) and cultivation techniques (fertilization, plant protection).