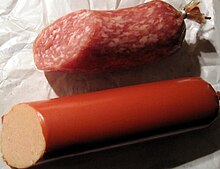 Mettwurst is a type of raw sausage made from pork and beef .

The name comes from Low German , where it is common in Middle Low German and Middle Dutch as Metworst . The term Mett refers on the one hand to the restriction of the Low German term for meat or minced pork without bacon , on the other hand the proximity to the Latin mattea for "delicious dish made of minced meat, herbs, etc." is indicated. Presumably the two words and their uses have attracted each other.

Depending on the recipe, region and era, the information on the properties of the sausage varies significantly. In Germany, standard recipes are mostly used in the production of sausage types; An example of this is the book The manufacture of fine meat and sausage products .

Generally, Mettwurst is made from beef and pork or bacon. The production is similar to that of salami , an Italian type of raw sausage. In preparation, the meat is cooled to freezing point , then it is minced in a cutter until it is finely grained. Finally, the mass is seasoned with nitrite curing salt (for the desired red color) and pepper . They are then filled into coarse intestines 50 to 75 mm in diameter. The sausage is then cold-smoked and ripened for about a week until it is ready to eat. Natural casings from pork and beef as well as artificial casings are used as sausage casings . Some varieties are not smoked, but air- dried , with these the meat is particularly finely chopped.

Mettwurst is typically used as a cold meat or topping on bread. Like other raw sausages, they are also used as a snack or side dish for dishes or as a filler for soups and stews. Because of the variety of types, variants and recipes, the name is also used as a synonym for raw sausage in general or similar types such as Knackwurst and Pinkel .