Durum is a redirect to this article. The rolling pin is listed under Dürüm . 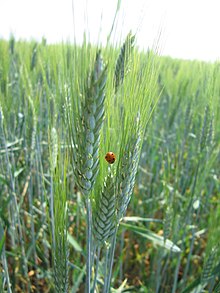 Durum wheat grows as an herbaceous plant and reaches heights of 80 to 150 centimeters. The stalk is thick-walled and the top with Mark met. The nodes are bare.

The annual inflorescence measures 4 to 6 centimeters without awns , with a width of 12 to 18 millimeters. It is compressed on the sides and roughly a square in cross-section. The ear axis is not brittle when ripe, so the durum wheat is a naked wheat. Tufts of hair sit at the point of attachment of the spikelets . The spikelets contain four to seven flowers, two to four of which are fertile . The spikelet is 10 to 15 millimeters long, longer than it is wide. The glumes are 9 to 12 mm long, almost as long as the lowest floret. They are membranous and keeled sharp to winged. The keel ends in an upright tooth. The side keel ends in a side tooth. The lemmas have nine to 15 nerves, are no more than 12 millimeters long and carry an awn up to 20 millimeters long.

The caryopsis is elongated-pointed. It is loosely covered by the cover and palea and falls out of the ear when it is ripe. The endosperm is glassy.

Durum wheat is characterized by its high gluten content , yellow color and high cooking strength. It has a higher protein content and at the same time lower starch content than winter soft wheat.

The composition of durum wheat naturally fluctuates, both depending on the environmental conditions (soil, climate) and the cultivation technique (fertilization, crop protection).

Details per 100  g of edible portion:

Durum wheat is only known as a culture. It probably originated from the emmer ( Triticum dicoccon ). It loves warmth and needs less than 500 mm of annual precipitation . Important growing areas are the Mediterranean and the Middle East .

Durum wheat is particularly rich in protein (average content around 16%). Elastic doughs can be obtained from the semolina or haze of durum wheat, which are particularly suitable for the production of pasta , especially classic Italian pasta . Also couscous and bulgur are made from durum wheat.

In the European Union , consumption exceeds production. In order to keep the price low, there is an export duty on durum wheat - currently (as of May 2016) the only one in the EU.

Durum wheat that has been pre-cooked in steam, dried and peeled, is available under the brand name Ebly .