Walkenried is a unified municipality in Lower Saxony on the edge of the southern Harz in the district of Göttingen .

Walkenried is on the Wieda . Until the reunification , Walkenried was located directly on the inner-German border, which ran south and east of the community. Walkenried and the district of Zorge are state-approved climatic health resorts ; Wieda is considered a health resort with a healthy climate .

The municipality of Walkenried lies in the triangle of federal highways 4, 27 and 243 on the southern edge of the Harz Mountains .

The originally wooded Walkenried marshland was transformed from the 12th century by the monks of the adjacent Cistercian monastery Walkenried into a rich pond landscape with fertile farmland. Today 50 of them are still detectable. All ponds are located in a nature and bird sanctuary and are now partly managed by the local sport fishing club.

The following localities belong to the municipality of Walkenried (population in brackets on December 31, 2015): 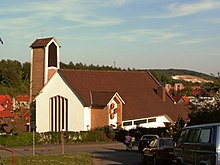 Walkenried was first mentioned in 1085 . The historical center is the Walkenried monastery, built by Cistercians in 1127 . The originally wooded Walkenried marshland was converted from the 12th century by the monks of the monastery into a rich pond landscape with fertile farmland. 365 ponds were created by the monks in order, according to tradition, to have one pond available for fishing every day of the year. Today, however, only 50 of them are detectable. All ponds are located in the “ Priorteich / Sachsenstein ” nature reserve . Some of the ponds are now managed by the local sport fishing association.

For the Brunswick Duke August Wilhelm from 1725 to 1730 a hunting lodge was built from rubble stones of the monastery by the state master builder Hermann Korb south of the monastery grounds. The solid walls, which encompass the garden of the palace in the south and west, date from the time when the Wildenhof monastic stud farm was located there before the palace was built. The Walkenried hunting lodge that has been preserved is now privately owned and used as a hotel guesthouse. 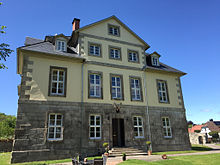 The place became known throughout Germany after the Second World War , when one of the most important railway border crossings between the British and Soviet occupation zones was located here on the so-called southern Harz line between Ellrich and Walkenried .

For the development of the postal system in Walkenried, see: Braunschweig-Blankenburg postal route

The name originally referred to Alt-Walkenried, which was a settlement 1.5 km north of the monastery and was converted into a grangie in the 12th century (1205: "grangiam, que dicitur Vetus Walkenredde"). An "Alden Walkenride" is documented in 1473.

At around 56%, the majority of residents belong to the Evangelical Lutheran Church, 10% are Catholic, and around 34% do not belong to either of these two denominations ( census in the European Union 2011 ).

The Evangelical Lutheran parish Walkenried belongs to the provost of Bad Harzburg . The chapter house of the former Cistercian monastery has been used for Protestant services since 1570.

The full-time mayor of the Walkenried community has been Dieter Haberlandt since 2016. He was the only applicant to receive 69.2% of the vote. His deputies are Andreas Viehweger (CDU) and Ulrich Kamphenkel (SPD).

Chronicle of the incumbents

Following the local elections on September 11, 2016, the local council has been made up of five councilors since November.

The local mayor of Walkenried is Claus Eggert (SPD). His deputy is Marius Klenner (SPD).

Walkenried is on the southern Harz line . Regional trains of the DB Regio to Northeim and Nordhausen stop every hour at the new train station in the town center . The old station is a short distance further in the direction of Northeim, where all passenger trains ended up to the turn. The meter- gauge narrow - gauge railway Walkenried – Braunlage / Tanne also began in Walkenried , but was later replaced by today's bus route 470. In 1963 the last section of the route was finally closed.

Municipalities in the district of Göttingen

Districts of the community Walkenried