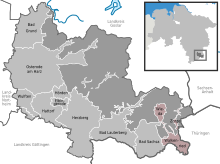 On November 1, 2016, the integrated community was transformed into the single community Walkenried . At the same time, the districts of Osterode am Harz and Göttingen were dissolved and a new district of Göttingen was formed.

The originally wooded Walkenried marshland was converted from the 12th century by the monks of the adjacent Cistercian monastery Walkenried into a rich pond landscape with fertile farmland. 365 ponds were created by the monks in order, according to tradition, to have one pond available for fishing every day of the year. Today, however, only 50 of them are detectable. All ponds are in a nature and bird sanctuary. Some of the ponds are now managed by the local sport fishing association.

Walkenried was first mentioned in 1085 . The historical center is the Cistercian monastery Walkenried, built in 1127 .

The last joint municipality council consisted of 14 councilors from the following parties:

Walkenried is on the southern Harz line . Regional trains of the DB Regio to Northeim and Nordhausen stop every hour at the new train station in the town center . The old station is a short distance further in the direction of Northeim, where all passenger trains ended up to the turn. The meter- gauge narrow - gauge railway Walkenried – Braunlage / Tanne also began in Walkenried , but was later replaced by today's bus route 470. In 1963 the last section of the route was finally closed.

Ruins of the former monastery church