Orchestral Maneuvers in the Dark

The British band was founded in 1978 by Andy McCluskey (born June 24, 1959 in Heswall) and Paul Humphreys (born February 27, 1960 in London). On their first tour of England in 1978, they opened for Gary Numan . The first single called Electricity was released in 1979 on Factory Records , produced by Martin Hannett under the pseudonym Martin Zero. In 1980 the first LP Orchestral Maneuvers in the Dark was released on Dindisc. Messages (also as 10 ″) and Red Frame, White Light were extracted as singles from the debut . Especially in these first publications you heard very clearly that OMD was strongly influenced by Kraftwerk . Electricity in particular showed strong parallels musically, lyrically and conceptually to Kraftwerk's radioactivity album .

The successful single Enola Gay was released from the follow-up album Organization , which was released in the autumn of the same year . The first edition of the UK pressing contains a 7 ″ under the title The Unreleased '78 Tapes with interesting, sometimes quite experimental recordings of early live performances.

Architecture & Morality followed at the end of 1981 , which included the hits Souvenir and Maid of Orleans (The Waltz Joan of Arc) . The latter reached number 4 in the UK charts and was even number one in Germany for four weeks - in 1982 it was the best-selling single record in Germany. The song was in the charts for weeks, especially in Southeast Asia, and was "played up and down" on radio stations. Worldwide the title advanced to the best-selling and most frequently played single of the year 1982. At this time, Martin Cooper (born October 1, 1958) and Malcolm Holmes (born July 28, 1960) completed the group.

On the B-sides of the single releases from Architecture & Morality , pieces already appeared that were contained in hardly changed versions on the following long-playing record Dazzle Ships in the spring of 1983. Stylistically stricter and more experimental, this album failed to achieve the great commercial success of its predecessor. The singles Genetic Engineering and Telegraph only reached middle chart positions. The endpoints of this first period of OMD were the pieces The Avenue as B-side of the maxi-single Locomotion and (The Angels Keep Turning) The Wheels of the Universe , a single recorded on one side, which was added to a special edition of the follow-up album Junk culture became. This failure corresponds to the success of guitar-oriented music, the protagonists of which were Big Country and U2 , and which in the case of Simple Minds (Waterfront) and Ultravox (One Small Day) and even The Human League (The Lebanon) led to a reorientation, the one Disclosed abandonment of the use of electronic sound generators. Incidentally, Dazzle Ships dared to come closest to Kraftwerk , both thematically and stylistically , with whom OMD also had personal contact in the meantime.

With the album Junk Culture , sold in April 1984, OMD reinvented itself, using musical motifs from Latin American music and technically through the use of the Fairlight computer , which was developed between 1981 and 1984 after early use by Kate Bush , Ph.D. , Mike Oldfield and ABC had radically changed the way electronic music was produced and composed. The brothers Graham & Neil Weir ( The Weir Brothers ) were also members of the band from 1984 to 1988 , although they were originally only intended as live reinforcements for the band.

The LP Crush , released in mid-1985, was produced by Stephen Hague, not least due to pressure from the record company, who in the following years became one of the most important through his collaboration with bands such as Pet Shop Boys, Erasure, New Order, Climie Fisher, The Communards etc. Became a pop producer in the late 1980s. Crush turned away from the more experimental forerunner albums and delivered an album that was largely tailored to mainstream tastes, which mainly gave more space to acoustic instruments (drums, saxophone, guitars) and could also come up with a lot of love songs that were untypical for OMD. With the singles So in Love and (especially in Germany) Secret , OMD achieved good chart successes and found many fans in the USA.

The group's only top 10 hit in the US was If You Leave from the soundtrack of the film Pretty in Pink , which reached number 4 in the US singles charts.

With the last joint album, The Pacific Age (1986), again produced by Stephen Hague , whose single (Forever) Live and Die was successful in Germany with a top ten ranking, OMD showed signs of a return to more experimental forms. The single We Love You became a hit in Australia. The title Shame was re-recorded for the single release, but fell through with the audience. At this point, McCluskey and Humphreys could no longer agree on a common musical course. The last joint single Dreaming followed in 1988 and a best-of album in the spring of 1988. The B-side, Gravity Never Failed, a piece from the time of the recordings for Architecture & Morality, was released for the first time.

Then Humphreys, Cooper and Holmes left the band and founded a project called "The Listening Pool" (1993) and a label called Telegraph Records , which soon went bankrupt. Andy McCluskey retained the naming rights to "OMD" after a lawsuit . After a three year hiatus, he made a comeback under the name OMD, which was surprisingly successful (for him too). During live performances, McCluskey was accompanied by a band: on keyboards Nigel Ipinson (* May 1970) and Phil Coxon (* July 1, 1963) as well as Abe Juckes (* April 7, 1971) on drums . The album Sugar Tax (1991) with the singles Sailing on the Seven Seas , Pandora's Box and Call My Name as well as the Kraftwerk cover Neon Lights sold so well that McCluskey recorded another album in 1993: Liberator . Its moderate sales figures prompted McCluskey to change musical course with the album Universal (1996), whose single Walking on the Milky Way was able to conquer number 17 in the British singles charts. Two of the pieces were contributed by Karl Bartos , for whose project "Elektric Music" McCluskey wrote and sang a piece in 1993. The meager sales of the album ultimately led to the project being dissolved in autumn 1998. Another best-of album ( The OMD Singles ) and a remix single followed in the same year, although this was not released in Germany. The last official album was Navigation (2001), a B-side anthology.

In 1997, McCluskey was involved in the founding of the group Atomic Kitten , whose producer he subsequently became.

Paul Humphreys meanwhile also worked with Claudia Brücken (former singer of Propaganda ) as Onetwo , with whom he was also privately dating from 2013 to 2016.

In 2005 OMD came together for the first time in years for an appearance with the line-up of Andy McCluskey, Paul Humphreys, Malcolm Holmes and Stuart Kershaw. The occasion was the recording of the RTL program The Ultimate Chart Show - The Most Successful Artists of the 80s . In an interview given around the recording, McCluskey and Humphreys announced that a further collaboration was planned. In a BBC interview, McCluskey announced that, among other things, his children were also responsible for this, as they, now the biggest OMD fans, had asked him again and again why he wasn't doing "great music" again with Paul as in the 1980s .

On their official website, OMD announced in early January 2006 that the band would produce a new album in 2008 with their original line-up (Andy McCluskey, Paul Humphreys, Mal Holmes and Martin Cooper). 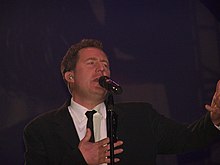 In December 2006 OMD were next to u. a. John Miles and Mike Oldfield as guests at Nokia Night of the Proms , which toured twelve German cities. There are two songs played live by the band on the accompanying album.

In spring 2007 the band started a successful European tour with the original line-up; In Germany alone there were nine concerts (including Hamburg, Cologne, Berlin, Leipzig, Munich, Mainz). The tour was divided into two different concert programs: once under the name Architecture & Morality (the complete successful album was played here, there were other titles as an encore) and once under the name The Best of OMD (here the hits from all years - too those of the 1990s - played).

In autumn 2007 it was announced that all further tours were canceled until further notice due to cancer of Andy McCluskey's wife.

On December 7th, 2009 the double DVD Electricity was released - featuring a performance of The Energy Suite . The two-part live concert was recorded together with the Royal Liverpool Philharmonic Orchestra in June 2009. For the first time, The Energy Suite contains the compositions of Andrew McCluskey for a joint art project with Peter Saville and Hambi. The Energy Suite was previously only heard at an exhibition in Liverpool in 2008 and was not originally intended to be made available to a larger audience.

The studio album History of Modern was released on September 17, 2010 . The first single If You Want It was released in advance as a download, 7 ″ vinyl single, CD single and CD maxi on September 6th. With the album, McCluskey and Humphreys brought the well-known OMD sound into modern times. The album, like the ones that followed, was produced, arranged, recorded and mixed by McCluskey and Humphreys themselves.

With English Electric OMD released their twelfth studio album in April 2013. It could be listened to in full as a free online stream in advance and continues the mix of songs and sound collages already known from Dazzle Ships.

After Malcolm Holmes was unable to play on the 2013 tour after a heart attack and the band had to cancel the rest of the tour through the USA, Stuart Kershaw has replaced him on drums ever since. Andy McCluskey also produced many of the songs from the 1990s with Stuart Kershaw, including hit singles such as Sailing on the Seven Seas , as well as some hits from Atomic Kitten, including Whole Again .

On September 1, 2017, the 13th regular studio album The Punishment of Luxury was released , which continues the concept of English Electric . OMD's first four albums, Orchestral Maneuvers In The Dark , Organization , Architecture & Morality and Dazzle Ships , were re-released on vinyl in 2018.

Commons : Orchestral Maneuvers in the Dark  - collection of images, videos and audio files