The Priorteich / Sachsenstein is a nature reserve in the small town of Bad Sachsa in Lower Saxony and the municipality of Walkenried in the district of Göttingen .

The nature reserve with the registration number NSG BR 003 is 315  hectares in size. It is part of the FFH area "Gipskarstgebiet bei Bad Sachsa". In the north-west and west as well as in the south and south-east it borders on parts of the nature reserve “ Gipskarstlandschaft Bad Sachsa and Walkenried ”. To the north it borders on the landscape protection area "resin". The area has been a nature reserve since March 16, 1950. The responsible lower nature conservation authority is the district of Göttingen.

The nature reserve is located roughly between Bad Sachsa and Walkenried in the Walkenrieder Zechsteinhügelland in the southern Harz Zechstein belt in the south of the Harz Nature Park . It includes the fish ponds to the southwest and west of Walkenried, contiguous beech forests and meadow areas. In the nature reserve there are near-natural streams, fens , swamp areas and swamp forests . In hillside areas Kalktrockenhangwald increased, growing on cliffs Nardus grasslands . High proportions of oaks can be found in the beech forests , which points to an earlier use as a hut forest .

History of the ponds

The ponds were created in the Middle Ages by monks from the Cistercian monastery of Walkenried as fish ponds around Walkenried. Legends tell of up to 365 ponds; at least 50 can be reliably proven.

The fish ponds are relatively shallow. Some of them have arisen from existing sinkhole lakes, which the monks have enlarged with dams, but for the most part also new systems. Often they are fed by karst springs, sometimes they get their water from nearby streams , in rare cases only from precipitation.

The Priorteich between Bad Sachsa and Walkenried is the largest of the ponds in the nature reserve. There is an open-air forest swimming pool on its north bank. 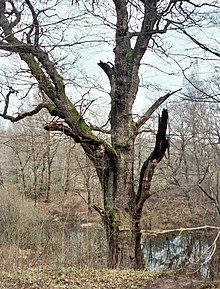 The Saxon oak at the Priorteich, April 2003

On the northern edge of the Höllstein is the natural monument "Saxon oak", an ancient oak whose age is estimated at over 850 years.

To the northwest of the Höllstein lies the Sachsenstein, a mountain made of Werra anhydrite, the prominent rock spur of which slopes down to the north, west and south-west to the Uffe valley. On this rock spur lies the Sachsenburg , which was built at the instigation of Emperor Heinrich IV and first mentioned in a document in 1073. The ruin of the castle, which was destroyed again in 1074 , was severely damaged in 1869 when the mountain was pierced for the construction of the southern Harz route , which runs through the nature reserve. Today it is designated as a cultural monument .

A special feature of Höllstein and Sachsenstein are the near-surface spring caves called “dwarf holes”, which are created under the influence of water when anhydrite is converted into gypsum . The largest known spring cave was the “forest smithy” in the Blumenberg. It is largely weathered and collapsed in 1990. There are various legends about the swelling caves.

The Sachsenstein drops steeply to the Uffetal. This steep face, which is about one kilometer long and up to 30 meters high, is designated as a natural monument of the “Sachsenstein Cliffs” and is the result of the Uffe flowing past its foot.

To the north-west of Walkenried is the Mönchswald, an old hut forest, on the edge of the nature reserve. The forest was used as pasture until 1950. Since 2010 it has been grazed again for care.

In addition to the southern Harz route between Bad Sachsa and Walkenried, other traffic routes cross the nature reserve, including two state roads . Several hiking trails run through the protected area, including a section of the southern Harz karst hiking trail . In the south of the reserve is the Sachsensteinhütte refuge , which is included as No. 166 in the system of stamping points of the Harz hiking pin.

Nature reserves in the district of Göttingen