View of the monastery from the Buchberg

Church and enclosure of the former Benedictine monastery

The Ilsenburg Monastery (St. Petrus and Paulus) is a former Benedictine abbey in the town of Ilsenburg in the Harz district in Saxony-Anhalt . The monastery complex dates from the 11th and 12th centuries. The city of Ilsenburg has owned the monastery church since 1974 and had the sacred building extensively restored. The remains of the cloister building have been owned by the Ilsenburg Abbey Foundation since 2000. 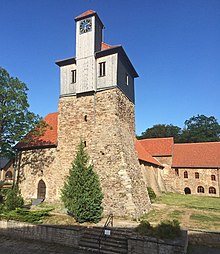 North view of the monastery church

Interior of the monastery church

The Ilsenburg Monastery, inhabited by Benedictines for more than 600 years, was built on the site of a presumed hunting palace not before the second decade of the 11th century . The former cappellanus emperor Otto III. was actively involved in politics in eastern Saxony, as the chronicler Thietmar von Merseburg reports. King Heinrich II donated part of his estate, notarized on April 15, 1003, including the Elysynaburg , to the Diocese of Halberstadt . Bishop Arnulf von Halberstadt founded his own monastery. For this purpose he transferred the royal donation to the new monastery. Furthermore, Arnulf left extensive goods from his property in the region between Ilsenburg and Osterwieck to the new monastery . According to a controversial document dated April 6, 1018, he called monks from the Fulda monastery to Ilsenburg. The expansion of the imperial hunting palace into a monastery probably dragged on until 1018. The heyday of the 500 year old monastery was between the late 11th and 13th centuries. Numerous properties acquired through purchase and donations made it one of the richest Benedictine monasteries between the Weser and Elbe rivers. Spiritually, the Ilsenburg Benedictine monastery followed the Consuetudines of Fulda in the first decades of its existence . After the third successor in the episcopate during the monastery time Burchard II had appointed his nephew, the monk Herrand , as abbot , Ilsenburg gained increasing importance in the spiritual field from around 1070. Herrand, a representative of the Gorzer Reform , carried out the reforms sought by Burchard by calling monks from the Lorze Abbey of Gorze to Ilsenburg. The Ilsenburg Abbey itself subsequently developed its own customs in the Ordo Ilseneburgensis , which radiated into a group of other monasteries. The following Benedictine abbeys, among others, were newly established or reformed from Ilsenburg: Huysburg , Harsefeld near Stade, Hillersleben near Magdeburg and Wimmelburg near Eisleben. The monastery, which burned down in 1120, was restored in 1129 by Abbot Martin. Abbot Sigibodo († 1161) and Abbot Tiother († 1176) expanded the monastery complex. Isenburg already had an important monastery school at the end of the 11th century, and there was evidence of a lively activity in writing and art in the 12th century.

The reform of monastery life in Ilsenburg found its structural expression in the construction of a larger abbey church according to the Gorzer scheme, which was consecrated on June 5, 1087 by Bishop Burchard II to the holy apostles Peter and Paul. Its three-aisled choir , which in turn ended in three apses , can be traced for the first time in the church architecture of the Benedictine order in the former German Empire . The richly decorated floor made of plaster screed as a face screed dates from around 1200 and is today one of the treasures of Romanesque art in Germany. The partially preserved buildings of the enclosure were erected between 1120 and 1176 after fire destroyed the previous buildings. At one time 25 monks belonged to the convent . Since 1464/65 the abbey was a member of the Bursfeld congregation of the Benedictine order.

In 1131 Abbot Heinrich had a hospital church consecrated to the Mother of God built near the abbey, which served the pastoral care of lay people and pilgrims . In the course of the Reformation in 1567 it became a Protestant parish church, see Marienkirche (Ilsenburg) .

The monastery with cloister and St. Mary's chapel on the south side of the church was largely destroyed in the time of the Peasant Wars in 1525. Large parts of the library were lost. When Count Wolfgang zu Stolberg took over the government in 1538, he confessed to the teachings of Martin Luther . Under the abbatiate of Abbot Henning Brandis († 1546) the convent turned to the Reformation, which was completed in 1547 with the establishment of a Protestant monastery school that existed until 1627. The Counts of Stolberg hunted here several times, according to Count Albrecht Georg. The count's room in the monastery was mentioned as early as 1550.

The last Protestant abbot Henning Dittmar died in 1572. After 1573, Count Christoph zu Stolberg, appointed as administrator, laid down the northern part of the monastery church, the central nave , crossing and choir were newly vaulted and a patronage box was installed in the southern arm of the transept . In the meantime, the Ilsenburg monastery was in the possession of the Statius von Münchhausen and fell back to the Counts of Wernigerode in 1609. Count Heinrich built it for his wife Adriane, b. Countess von Mansfeld, as a widow's seat. Under Count Heinrich Ernst, Ilsenburg House became the seat of the count's household in 1672. After the headquarters were relocated to Wernigerode, the rooms were used as apartments for officials and for economic purposes.

The west wing of the enclosure and the cloister were demolished in the 17th and 18th centuries. The remaining parts of the building experienced very different uses in the following centuries. In connection with the monastery buildings, Count Otto zu Stolberg-Wernigerode built a new castle in the neo-Romanesque style for his uncle Count Botho according to the plan of the railroad builder Ebeling from Braunschweig and under the direction of the building councilor Carl Frühling (1839–1912). The shell was completed in 1861 . The construction of the palace wing on the west side of the former monastery grounds is evidenced by major maintenance measures on the structure of the monastery.

The Ilsenburg monastery buildings have largely been preserved. These include the monastery church without a north aisle, parts of the sanctuary , parts of the west section and the cloister without west wing and cloisters. Even the earlier, demonstrably higher vault is no longer there.

The monastery church was built as a Romanesque basilica at the end of the 11th century . It had a transept and a three-aisled choir. It was opened in the west through a large portal with columns . The outlines can still be seen today.

In the 14th and 15th centuries, only a few structural changes were made to the church and the enclosure. However, the furnishings and architectural decorations in the Gothic style were more extensive. During the storming and plundering of the monastery in 1525, there were not only losses in equipment but also damage to the building fabric.

The monastery church was given its present form between 1573 and 1581.

On May 28, 1929, Prince Christian Ernst zu Stolberg-Wernigerode leased the old monastery buildings and the Marienhof for 30 years to the Old Prussian Union of Evangelical Churches in Berlin, which established various training facilities on the premises. In 1930 the church seminar abroad was moved from Stettin-Kückenmühle to Ilsenburg. In the summer of 1936, part of the palace was set up as a rest home for church workers. During the war years, the SS set up a resettlement camp for the Volksdeutsche Mittelstelle at the castle . The SS left the palace on April 10, 1945 and the Americans drove into the courtyard on April 11, 1945. After looting, up to 500 refugees and displaced persons were temporarily accommodated in the castle from summer 1945. In the course of the land reform , the castle then became the property of the Ilsenburg community on December 15, 1945. As early as October 3, 1946, the palace and the fenced-in park were given to the Evangelical Church, which used it as an Evangelical Abbey, pastors' college and research academy. With the tightened measures of the border policy of the GDR in the exclusion zone, the state security took over the area from 1961. The monastery church was closed after Christmas 1967, works of art and parts of the furnishings disappeared afterwards.

After the contract expired, the remnants of the enclosure, which had meanwhile been expropriated, remained unused. Only with the sale of the monastery church to the community of Ilsenburg in 1974 and the opening of a rest home for employees of the Ministry of Agriculture and Food in the castle wing were the buildings accessible again, at least for registered visitors, and the first security work and minor repair work was initiated. In 2000, the Ilsenburg Monastery Foundation, chaired by Princess Maria zu Stolberg-Wernigerode, took over the east and south wings of the enclosure of the former Benedictine monastery. They are now one of the priority objects of the German Foundation for Monument Protection . An art and culture center is to be built, which will also include the castle .

The former Benedictine monastery of St. Peter and Paul is now a stop on the Romanesque Road in Saxony-Anhalt and the Harz monastery hiking trail .

Names and years indicate the verifiable mention as dept .

The organ builder Paul Ott built an organ for the church in 1936–1939 as Opus 26. From two manuals and pedal , 24 registers on slider chests with mechanical action could be played. From 1947 the organ builder Wilhelm Sohnle took over the maintenance of the organ. Around 1978 it was transferred to the Ilsenburg Marienkirche by the organ builder Erwin Lägel from Eisleben , who was employed by the Schuster organ builder . The church then remained without an organ until 2018.

For the church of St. Johannis (Mainz) a new organ was built in 1960/61 by the organ building company Förster & Nicolaus (Lich). The slider chest instrument has 41 stops on three manuals and a pedal. In 1995, the organ was reworked slightly by the builder's workshop in its original location and in 1997 it was given an electronic setting system and sequencer . Due to the renovation of the Mainz church that began in 2013, the organ was dismantled this year and rebuilt in the monastery church of Ilsenburg from 2018 by the organ builder Reinhard Hüfken .

In the once double-towered monastery church there is a medieval ring of three bells in the bell room . All bells hang in the wooden belfry on wooden yokes. The bridal bell hangs on the cranked steel yoke and is to be hung on a straight wooden yoke as part of a renovation.

In the tower of the Marienkirche, the former hospital church, only one bell, which is about 600 years old, hangs in an iron belfry. It weighs about 830 kg with a diameter of 112 cm and a height (without crown) of 88 cm. As a decoration, she wears a lettering in capitals at the top of her neck : "Qui sequeris lete me dum sono spes bona de te" (translation: "If you joyfully follow my sound, you can hope for the best" ).