The district of Northeim is a district in southern Lower Saxony .

The district borders clockwise in the northwest, beginning with the districts of Holzminden , Hildesheim , Goslar and Göttingen (all in Lower Saxony) as well as the district of Kassel (in Hesse ) and the district of Höxter (in North Rhine-Westphalia ). The west-east extension is approx. 48 km (border triangle on the Weser to Lindau), from north to south it is 45 km (Gehrenrode to Offensen).

The district is located in the Weser - Leine -Bergland. The Leine flows in the eastern district in the Leinegraben in a south-north direction. In the northeast, the district borders on the western foothills of the Harz Mountains . It is limited in the southwest by the Weser . There is also the red sandstone massif Solling . In the central district area, the flat Keuper formation of the Leinegraben is interrupted by smaller ridges (Heber, Hube, Selter), some of which are made of shell limestone (like the Amtsberge ) and some of red sandstone (like the Ahlsburg ). The highest elevation in the district is the Große Pollen (528 m above sea level) in the Solling near Dassel.

Between the two central centers of this district, Northeim and Einbeck , the Leineniederung in connection with the adjacent areas of Polder I and the Northeimer Seenplatte forms a nature reserve that is of national importance, especially for some species of duckbirds . The area is a central resting area in the migratory corridor of several migratory bird species and is protected as a European bird sanctuary . The Solling-Vogler Nature Park , the second largest contiguous forest area and low mountain range in Lower Saxony, begins in the western district area , at the municipal borders of Bodenfelde , Dassel , Hardegsen and Uslar . Larger areas are designated as landscape protection areas due to their diverse character and recreational function .

From 2009 to 2013, the political institutions examined a merger of the Northeim district with the neighboring Göttingen and Osterode districts in various constellations for synergy purposes. In April 2012, a petition against the merger was reported to District Administrator Michael Wickmann (SPD). However, too few signatures were collected for the referendum. In February 2013, the Northeim district administrator finally advised against a merger, the talks were ended, although the red-green majority in the district council continued to advocate a merger. The talks about a three-way merger have nevertheless failed. Talks about the two-person merger of the districts of Göttingen and Osterode without Northeim, however, went well, as a result of which the merger of the two districts was implemented on November 1, 2016.

The district of Northeim was significantly enlarged in both 1932 and 1977.

The election results of the district council elections since 2001 are shown in the following table:

The district parliamentary groups of the SPD, Greens and FDP have formed a group.

With regard to the federal elections , the district is divided into two parts. While almost the entire district belongs to constituency 52 Goslar - Northeim - Osterode , the city of Uslar and the area Bodenfelde belong to constituency 47 Hameln-Pyrmont - Holzminden .

*: From the military government of the British zone of occupation used
**: Every seven days interruption from 1 November 1991 - he was appointed by the council to honor District 7 November 1996. At the end of his term - 7 November 1991, from 1 November 1996th
***: From November 2, 2001 to April 30, 2002 he was initially a volunteer, since May 1, 2002 he has been the full-time district administrator of the Northeim district (1st full-time district administrator after the end of the Second World War ). The first regular term of office expired on October 31, 2011. It was extended to October 31, 2013 by a district council resolution. The background was the now unsuccessful attempt to reform the district with the districts of Osterode and Göttingen. In the district election on October 6, 2013, he received 51.87 percent (2002 = 51.7%) of the votes cast and was thus re-elected as district administrator. The new term of office began on November 1, 2013 and was originally intended to last eight years. With effect from September 1, 2015, Wickmann resigned prematurely at his own request for health reasons.

List of senior district directors in the Northeim district:

*: Appointed by the Military Government of the British Zone of Occupation
**: Re-elected March 20, 1992 for 12 years. In March 2001 Ralf-Reiner Wiese returned his office to the district council with immediate effect in order to then use partial retirement and the release phase from April 1, 2001 - February 28, 2002. 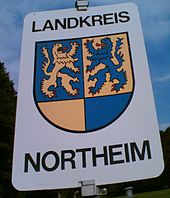 The two lions stand for the two districts of Northeim and Uslar , from which the new Northeim district emerged in 1932. The right half corresponds to the right half of the coat of arms of the old district of Uslar. The lion represents the heraldic animal of the Welfs , who ruled over the local territory and the Duchy of Brunswick-Lüneburg for centuries .

The description of the flag reads: “The upper half is blue, the lower half yellow; in the middle the coat of arms of the district. "

Since March 2003 there has been a partnership between the Northeim district and the Powiat Człuchów (formerly Schlochau district ) in Poland .

The industrialization of the district was disadvantaged by the region's location on the edge of the zone until reunification .

Accordingly and due to the appropriate soil structure , agriculture , forestry and livestock farming continue to contribute to the overall economic output and shape the cultural landscape of the district. In addition, numerous medium-sized industrial companies are located.

The district is an Objective 2 region of the European Regional Development Fund (ERDF) . Since 2011 he has been a member of the Hanover-Braunschweig-Göttingen-Wolfsburg metropolitan region .

In the Future Atlas 2016 , the Northeim district was ranked 292 out of 402 districts, municipal associations and urban districts in Germany, making it one of the regions with a “balanced risk-opportunity mix” for the future.

There are two major rail junctions in the Northeim district.

In Kreiensen , where Brunswick territory intersected the Leine valley, an important railway junction was created. The Herzoglich Braunschweigische Staatseisenbahn opened its line from Braunschweig to here in 1856 and continued in the direction of Holzminden in 1865. Today the north-south route and the Altenbeken – Kreiensen railway intersect here .

The second junction in the Leinetal was created in the city of Northeim by routes of the Prussian State Railways . In Northeim, east-west connections intersect with the important north-south axis Hanover-Göttingen . This was built in 1854 by the Hanover State Railway . Since 1868 it has been in the direction of Herzberg - Nordhausen (" Südharz route ") and since 1878 in the opposite direction to Uslar / Paderborn (" Sollingbahn "). The Göttingen – Bodenfelde railway has been branching from this line since 1910 .

Local trains and individual ICE trains that stop in Northeim and Kreiensen run at least every hour on the old north-south route.

In addition to 1991 km by about 35 length is 1988 ICE - Rail Line Hanover-Würzburg added. This also runs in a north-south direction through the eastern district area as well as the old north-south route running parallel to it . The next stop on the ICE route is Göttingen .

Only a few branch lines were added to this network of main lines and have now been closed. The Braunschweigische Landes-Eisenbahn-Gesellschaft connected the city of Einbeck to the railway in the Leinetal in 1879; from there in 1883 the Ilmebahn ran the tracks to Dassel in the Solling. The section between Salzderhelden and Einbeck-Mitte was reopened for regular passenger traffic in December 2018.

From 1902 the Prussian State Railways connected Bad Gandersheim in a northerly direction with Hildesheim.

In 1899, the Osterode - Kreiensen district railway established a narrow-gauge connection to the neighboring district of Osterode.

Local public transport in the district is carried out with bus routes. All train and bus connections (with the exception of the above-mentioned ICE) belong to the VSN .

The Europaradwanderweg R1 and the Leine-Heide-Radweg lead through the district. The Weserradweg runs in part on the western border of the district. A network of trails on the Solling is combined to form the Solling-Vogler mountain bike region.

On Sultmer Berg near the glider airfield, the Helios Group is building a new hospital from 2012 to 2014 for around 70 million euros, with 25 million euros in funding from the state of Lower Saxony . The area previously close to the city center will be given up and handed over to the city of Northeim for further urban development. For 2014, 265 beds are still planned in the new clinic .

There are also some rehabilitation clinics of the Paracelsus clinics ( Roswitha Clinic, Klinik am See, Klinik an der Gande ) on site.

The Harzhorn event , which was only discovered in 2008, is attracting particular media interest. The protected recreation areas such as Solling and Northeimer Seenplatte are also popular .

A remarkably wide range of archaeological sites has also been proven in the district:

The Regional Association of Southern Lower Saxony was founded as a registered association to maintain cultural institutions . Well-known museums are the blank smithy Neimke , the Fredelsloh pottery museum Keramikum and the portal to history . The Gandersheim Cathedral Festival is one of the nationally significant cultural events .

See also : List of municipalities in the Northeim district

The following table lists all former municipalities in the Northeim district and their current affiliation:

On July 1, 1956, the district was assigned the distinctive sign NOM when the vehicle registration number that is still valid today was introduced . It is still issued today. Since November 15, 2012, due to the license plate liberalization , the distinctive signs EIN and GAN of the former districts of Einbeck and Bad Gandersheim are available again.