The district of Diepholz is a district in the center of Lower Saxony . It extends from Bremen about 70 kilometers south to the state border of North Rhine-Westphalia northeast of Osnabrück.

The district of Diepholz connects Germany's smallest and Germany's most populous state, namely Bremen and North Rhine-Westphalia . This makes the district a typical sectoral district .

In the district of Diepholz there are not only the four EU bird protection areas "Diepholzer Moorniederung", "Dümmer", "Kuppendorfer Böhrde" and " Oppenweher Moor " among others 49  nature reserves . The largest is the Northern Wietingsmoor and has an area of ​​1,599  hectares , the smallest is the black-headed gull colony Stelle with an area of ​​two hectares.

On November 1, 2011, the Engeln community became part of the newly formed area of ​​Bruchhausen-Vilsen.

On November 1, 2016, Süstedt followed suit and also became part of the Bruchhausen-Vilsen area.

The district council is composed as follows:

The coat of arms shows the lion of the Diepholz Count , framed by the claws of the bear , who represents the Count of Hoya .

Blazon : In gold two red reinforced, perverted introverted black bear paws, linked below together by black pleura; in it a erect, blue-armored and blue-tongued red lion.

There are 68 public, one Catholic and some private schools (2015), including one in the district.

as well as the

Hospitals: The four hospitals in the Diepholz district in Bassum, Sulingen, Diepholz and Twistringen form the St. Ansgar Clinic Association .

The economic focus of the district is in the north in the suburb of Bremen. The largest municipalities / cities in the district are located here: Stuhr , Weyhe and Syke (city). There are several wholesale markets of well-known companies (e.g. IKEA ) in the extensive commercial areas . The south in the direction of Westphalia is rural, although the combined municipality of Altes Amt Lemförde has the highest job density thanks to the industrial companies ZF Friedrichshafen (formerly ZF Lemförder) and BASF Polyurethanes (formerly Elastogran).

In the Future Atlas 2016 , the district of Diepholz was ranked 223 out of 402 districts, municipal associations and independent cities in Germany, making it one of the regions with a “balanced risk-opportunity mix” for the future.

Today's road users can only guess how much traffic in the Diepholz district was hindered in earlier times by the size and variety of moorland areas in the district and on its borders. Even today, however, there are still no attractive alternative routes to the direct road connections on certain routes (such as the Aschen - Lohne route), which leads to long detours in the event of road closures.

The district of Diepholz is crossed in a north-south direction by the main line Bremen - Osnabrück , which was put into operation in 1873 by the Cologne-Mindener Eisenbahn-Gesellschaft as the Hamburg-Venloer Eisenbahn . Several important communities in the district, which is tailored to this main traffic axis, are located on it.

The only long-distance traffic stop is Diepholz . Since the discontinuation of the two-hour Interregio , individual Intercity and Intercity Express trains on line 30 have stopped at the edge of the day .

The Regional Express (RE) runs every hour between Osnabrück and Bremen with modern double-decker coaches; The RE stops within the district in Lemförde, Diepholz, Barnstorf, Twistringen, Bassum, Syke and Kirchweyhe.

The regional S-Bahn Bremen / Lower Saxony also runs every hour between Twistringen and Bremen . It serves the stations of Twistringen, Bassum, Bassum-Bramstedt, Syke, Syke-Barrien, Weyhe-Kirchweyhe and Weyhe-Dreye. Since the introduction of the first expansion stage of the S-Bahn on December 12, 2010, there has only been one regional train a day from Bremen to Osnabrück.

In Bassum, the Prussian State Railways branched off another line in a southerly direction via Rahden to Bielefeld in Westphalia from 1900/01 , which crossed in Sulingen with the Nienburg – Diepholz line that was only opened by the Deutsche Reichsbahn in 1921–23 . The Bassum – Sulingen, Barenburg – Rahden and Sulingen – Nienburg sections have been closed and some of them are no longer passable after the points and track sections have been removed. In sections, the routes have even been built over by roads. At times there were considerations to reactivate this shortest rail connection between Bremen and Ostwestfalen-Lippe .

Today only the section Diepholz – Rehden (terminal of the company BTR-Logistik) –Sulingen (change of direction) –Barenburg (rail connection of the company BEB, crude oil and sulfur loading) is served. For this purpose, the creation of a bypass curve around Sulingen is planned so that the trains no longer have to change direction in the Sulingen station , which will be superfluous in the future, and the areas that are freed up can be used for other purposes. This would also make the aforementioned reactivation plans obsolete. However, the construction of this bypass curve has been delayed again and again for several years.

In the former county of Hoya , three small railways supplemented the rail network:

Since 1900 the meter- gauge small railway Hoya-Syke-Asendorf ran from Syke in an easterly direction to Hoya on the Weser. After this merger with the Hoyaer Eisenbahn to form the Verkehrsbetriebe Grafschaft Hoya (VGH), the line was switched to standard gauge from 1963 to 1966, so that continuous train journeys from Syke to Eystrup are possible. Today it is fully operational again, is used more than 10 days a year as a museum route Kaffkieker and (in the western part only sporadically) for freight traffic. On the branching, narrow-gauge route Bruchhausen-Vilsen - Asendorf, the Deutsche Eisenbahn-Verein e. V. established the “first museum railway in Germany” with busy museum traffic.

In the vicinity of the city of Bremen there are several stations in the municipalities of Stuhr and Weyhe on the Bremen-Huchting - Thedinghausen line , which was built between 1908 and 1910 by the Bremisch-Hannoversche Kleinbahn AG . Currently there are only sporadic museum trips here, but part of the route is planned to be upgraded to a light rail.

The regular passenger traffic was completely stopped except for the main line Bremen - Osnabrück:

The regional association Weser-Hunte , the association " Art in the Province ", the local music school of the local district, the municipal culture officers within the cities and communities, the parishes, the district savings bank and private cultural initiatives (the culture and art association eV Bruchhausen-Vilsen (KuK), the local, environmental and cultural association "Eule" eV in Schwarme , the cultural association Sulingen eV, "Jazz Folk Klassik in Syke eV", " Rüttelschuh in der Wassermühle eV "in Syke-Barrien ," KunstVereinSyke eV "and others).

The " Kreisarchiv Landkreis Diepholz " is the administrative archive of the local district. It is, as it were, the “memory” in which the historical files (the archive material ) of the current district and its predecessors are properly archived - collected, sorted and arranged - for viewing by users. So are the District Archives records (since about 1770), maps, documents (since 1458), discounts and old editions of the national newspapers for research-pupils, students, scientists and authors available for inspection. These unique items - this cultural asset - have been housed since 2011 in the integrated community of Barnstorf , district of Eydelstedt , in the so-called Hülsmeyer Park.

There are eight Jewish cemeteries in the Diepholz district: in Barenburg , Barnstorf , Bassum , Quernheim , Sulingen , Syke , Twistringen and Wagenfeld . They are cultural monuments that are worth protecting - stone witnesses to formerly existing Jewish communities and a lively Jewish community life up to the 1930s. The cemeteries are usually difficult to find, especially since they are mainly on the outskirts. There was also a Jewish cemetery in Diepholz , which was occupied until 1939. But it was devastated during the Nazi era and the tombstones were used to build roads .

See also : List of municipalities in the district of Diepholz 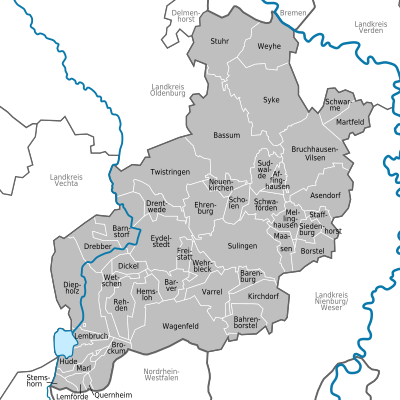 On July 1, 1956, the district of Grafschaft Diepholz was assigned the distinctive symbol DH when the vehicle registration number that is still valid today was introduced . It is still issued in the Diepholz district to this day.

Due to the license plate liberalization , the distinguishing symbol SY (old district Grafschaft Hoya with district seat in Syke) has been available since April 23, 2018 .