The title of this article is ambiguous. Further meanings are listed under Wagenfeld (disambiguation) .

Wagenfeld is one in the south of the county Diepholz located unified community with the districts Wagenfeld in the western and Ströhen in the eastern part.

Neustädter Moor; in the background the small observation tower

The distance between the outermost border points is 9.5 km from north to south and 18 km from west to east. 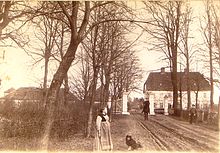 Old office building (in the middle); To the left of this is the old town hall building, which also no longer exists

The name Wagenfeld appears for the first time around 1280 in a register of the counts' ravensberg estates. The name is derived from Wakenfeld . Waken are pools of water that occur in the swamp and swamp landscapes of the moorland.

At the end of the 15th century , the Counts of Diepholz had a protective fortress called Auburg built on the Wagenfelder Aue flowing through the village . This moated castle , located on an island between a branched off arm of the floodplain and the Wagenfelder floodplain, was intended to deter the neighboring residents of Minden , who then regularly invaded the area. However, they felt provoked by the construction of the Auburg and destroyed it several times in the period that followed.

When Count Friedrich II. Von Diepholz died in 1585 , a legal dispute broke out over the territorial affiliation of the Auburg office , at the end of which it fell to the Landgraviate of Hesse-Kassel . In 1592 the son of the landgrave , Philipp Wilhelm von Cornberg , took office. After his death, the estates were divided among his numerous descendants and, in addition to the Auburg line, a Richelsdorfer, Kettenbacher, Hüffer and a Lübbecker von Cornberg line were formed.

His eldest son Bernd Philip donated the Auburg line and after his death in 1630 he was buried as the first head of the Auburg line in the church of Wagenfeld. When the Richelsdorf line of the Cornberger family died out in the fourth generation in 1739, Richelsdorf fell to the Auberger line, which in turn moved to Richelsdorf in 1762.

During the Napoleonic Wars , Wagenfeld belonged to the Rahden canton of the Minden arrondissement in the Oberems department of the French Empire from 1810 to 1813 . After Napoleon's unsuccessful Russian campaign, French troops fled the area in 1813.

On September 23, 1815 - 230 years after the split from Diepholz in 1585 - Prussia , Hanover and Kurhessen agreed to cede the office of Auburg to Hanover. In 1820, the Auburg District Bailiwick was again affiliated to the Diepholz Office .

The coupling of Wagenfeld from 1853 to 1861 resulted in the separation between the holdings of the Auburg estate and the private areas. The farmers were released from their dependency on a landlord and could henceforth obtain private property. In addition, the road and water network has been comprehensively restructured. The four localities of Bockel, Neustadt, Förlingen and Haßlingen were handed over to the administration of a mayor (at that time still called velvet chief) for the first time. The regional tradition that Wagenfeld was “the largest village in Germany” also dates from this time, because the new municipality was of an unusual size compared to other municipalities at the time.

During the annexation of the Kingdom of Hanover, Wagenfeld fell to Prussia after the German War in 1866 and was assigned to the province of Hanover and, from 1885, the Diepholz district .

In 1884 the royal Hanoverian chamber councilor, Karl Ludwig Viktor von Cornberg zu Auburg , was appointed baron and a year later the King of Prussia enfeoffed the Auburg for the last time. When he died childless in 1891, his distant relative Theodor von Cornberg inherited the Auburg. As early as 1904 he sold the extensive property at Auburg and Wagenfeld and died as the last Auburg von Cornberg to die in the small town of Neckarelz in Baden .

In 1908, the then district administrator William "Willy" Quassowski of the Diepholz district converted all four districts of Wagenfeld into political communities with their own elected councilors so that they could more easily receive state subsidies for school maintenance. The whole of Wagenfeld became one municipality with four member municipalities.

In 1932 Wagenfeld became part of the newly created district of Grafschaft Diepholz from the districts of Diepholz and Sulingen .

In 1937, the municipality of Wagenfeld acquired the Auburg building and 26 acres of land (around 6.5 hectares ). During the Nazi regime, twelve Jewish citizens formerly resident in Wagenfeld and their spouses were deported from their former homes to six different ghettos and concentration camps (Auschwitz, Riga, Stutthof, Theresienstadt, Treblinka and Trostinez) and murdered. A further 20 Jewish wagon fields were able to flee, mostly to the USA, Great Britain, Palestine or Argentina by 1938. Since September 14, 2008, a memorial tree with a memorial plaque near the Auburg manor has been commemorating the Wagenfeld victims of the Shoa .

From May 1946 to October 1948, the British military administration formed a municipal director's district with the municipalities of Rehden, Hemsloh, Barver, Wagenfeld and Hannoversch Ströhen based on the model of the British local government, the administrative center of which was set up in the Auburg. In October 1948 all director districts in Lower Saxony were dissolved and all former municipalities were re-occupied with mayors.

On November 25, 1966, the Lower Saxony state parliament passed the “Wagenfeld Law” to dissolve the integrated community and create the unitary community of Wagenfeld from the four communities of Wagenfeld-Bockel, Wagenfeld-Förlingen, Wagenfeld-Haßlingen and Wagenfeld-Neustadt. The law came into force on January 1, 1967. On March 1, 1974, the municipality of Ströhen was incorporated. The basis for this was the "Law on the reorganization of the municipalities in the area of ​​Grafschaft Diepholz / Grafschaft Hoya / Delmenhorst" of November 8, 1973.

Today only the mansion and servants' house is on the site of the Auburg. After 1945, refugee families lived there for eight years. After that, the building served as an agricultural vocational school until 1967 .

In 1977 Wagenfeld became part of the newly created district of Diepholz from the districts of Grafschaft Diepholz and Hoya .

In 1998/1999 the historic Auburg building was restored. Since then, the “Kulturkreis Auburg” has offered a varied cultural program on its premises.

From 1961 to 2002, Wagenfeld was a Bundeswehr location : the Luftwaffe maintained the 3rd battery of the anti-aircraft missile battalion 25 (3./FlaRakBtl. 25), which was assigned to the 4th Air Force division ( Aurich ). In 1975 the unit's accommodation area was given the name "Auburg Kaserne". Soldiers from the 42nd US Artillery Division were stationed in Wagenfeld until 1988, guarding the small number of nuclear warheads that would have been shot down by Bundeswehr soldiers in the event of a defense - after clearance by the Americans. Initially, conventional Nike Ajax missiles were used as the weapon system, followed by Nike Hercules missiles (with both conventional and nuclear warheads) for many years , which were finally replaced in 1989 by the MIM-104 Patriot (conventional). The conversion to the Patriot system made the small US garrison superfluous. In the course of its downsizing after the end of the East-West conflict , the Bundeswehr finally closed its Wagenfeld location. You can still see the barracks , the cleared missile launch site ( bunker ) and the former fire control area (former radar display ).

In 2005 the municipal administration moved into a wing of the new “Wagenfeld service center”, while the old town hall on Hauptstrasse no longer exists today.

The town hall of the Wagenfeld community

The municipality council of the municipality of Wagenfeld consists of 20 councilors and councilors as well as the mayor. This is the specified number for a municipality with a population between 7,001 and 8,000. The 20 council members and the mayor are elected for five years each by local elections. The current term of office began on November 1, 2016 and ends on October 31, 2021.

The following table shows the local election results since 2001.

Matthias Kreye, a non-party member, has been the full-time mayor of the Wagenfeld community since November 2014 . In the last mayoral election he was elected with 63.78% of the vote against three competitors. The turnout was 61.24%. Kreye replaced the previous incumbent Wilhelm Falldorf (CDU), who had no longer run.

See also: List of mayors and incumbents of Wagenfeld

Blazon : The coat of arms is divided. Above in silver a striding red lion. Below is a shaft of blue and silver arranged in three rows of five.

Wagenfeld has had a partnership with the French canton of Vibraye since 1977 .

From the former castle of the Auburg of the Middle Ages, only the mansion and servants' house is located on the site today. Other buildings and halls are used by the local building yard .

Animals from all over the world can be found in the Ströhen zoo , which is open all year round . In the zoo there is also the thoroughbred Arab stud Ismer .

The Jewish cemetery in Wagenfeld is a cultural monument . It is one of eight well-preserved Jewish cemeteries in the Diepholz district. In the cemetery in a small wood on “Barver Straße” there are 27 gravestones from the years 1811 to 1927 of the Jewish deceased.

Since 2014, the European Center of Expertise Mire and Climate (EZFM) with a crane-shaped exhibition and administration building has been located in the north of the Ströhen district.

On the former Rahden - Ströhen (Han.) Railway line , there is now a railroad trolley service for tourists. The “lane change” then takes place in Ströhen, because a former moor railway that has been converted into a tourist railway connects here. The approximately 3.5 km long route leads to the Neustädter Moor nature reserve . It ends near the Schäferhof Teerling, where a moor pad begins in the moor.

In 1905 the mill was built by Friedrich Söhler. It is built as a transit Dutchman with a four-story substructure and upper part made of bricks. The mill is equipped with sail blades, cap and oak shingles. In 1990 it was completely restored and was also used as a wedding mill for some time.

The Wagenfeld wholesale market has been held on the last Friday in August for over 425 years. From the initial dancing and trading of the rural population, an amusement market has developed over time.

The larger companies based in Wagenfeld include:

A bypass road is planned around the center of Wagenfeld and has been included in the Federal Transport Infrastructure Plan 2030 as an "urgent need".

There are two daily bus routes operated by Weser-Ems Busverkehr and Lahrmann Bus:

In addition, several lines ensure school traffic during school hours. The community is located in the tariff area of ​​the Bremen / Lower Saxony transport association .

In Ströhen there is an inactive train station on the Rahden – Bassum railway line . Passenger traffic ceased on May 22, 1982. The final shutdown followed on June 1, 1994.

There are currently trolley trips for tourists between Rahden and Ströhen .

The “Action Alliance for the Bassum-Bünde Railway” plans to reactivate it north of Rahden as the “Dümmer-Weser Railway” and to operate passenger transport by the Bonn Rhein-Sieg Railway by 2020.

People associated with the community