This article or section needs to be revised. More details should be given on the discussion: Polyurethane # PU_und_PUR . Please help to improve it , and then remove this flag.

Polyurethanes ( abbreviation PUR ; in linguistic usage also PU ) are plastics or synthetic resins that result from the polyaddition reaction of dialcohols ( diols ) or polyols with polyisocyanates . The urethane group ( ) is characteristic of polyurethanes .

Diols and diisocyanates lead to linear polyurethanes ; crosslinked polyurethanes can be produced by reacting triisocyanate-diisocyanate mixtures with triol-diol mixtures. The properties of PU can be varied within a wide range. Depending on the degree of crosslinking and / or the isocyanate or OH component used, thermosets , thermoplastics or elastomers are obtained . Quantitatively, polyurethane foams , as soft or rigid foam is most important. However, polyurethanes are also used as molding compounds for compression molding , as casting resins (isocyanate resins), as ( textile ) elastic fiber materials, polyurethane paints and as polyurethane adhesives .

In 1937 a research group led by Otto Bayer synthesized polyurethanes for the first time from 1,4-butanediol and octane-1,8-diisocyanate and later from hexane-1,6-diisocyanate in the laboratories of the IG Farben plant in Leverkusen . The corresponding polyurethane was called Igamid U or Perlon U. Further tests showed that tolylene diisocyanate was significantly more reactive than 1,6-hexane diisocyanate and that reactions with triols led to three-dimensionally crosslinked polyurethanes. In 1940 industrial production began in Leverkusen. However, due to the Second World War and the associated scarcity of raw materials, the market for polyurethanes developed only very slowly at first. Therefore, until the end of World War II, polyurethanes were only used for military purposes in aircraft construction. In 1952, less than 100 t of the important polyisocyanate toluene diisocyanate (TDI) were available per year . From 1952 to 1954, polyester foams were developed, which further increased commercial interest in polyurethanes. With the use of polyether polyols, the importance of polyurethanes grew rapidly. The greater scope for variation in the production of polyether polyols has resulted in a considerable expansion of the applications. In 1960, over 45,000 t of foam were produced.

By 2002, global consumption had risen to around 9 million tons of polyurethane, and by 2007 it rose further to over 12 million tons. The annual growth rate is approx. 5%. In 2011, production in Germany alone, with the main producers Covestro and BASF, was just under 1 million tons, of which around 32% was for building insulation, 20% for furniture and mattresses, 14% for automotive engineering and 10% for paints and coatings.

Polyurethanes can have different properties depending on the choice of polyisocyanate and polyol . The density of unfoamed polyurethane varies between around 1000 and 1250 kg / m³. Typical densities are around 5 to 40 kg / m³ for soft block foam or 30 to 90 kg / m³ for hard block foam.

Isocyanates can trigger allergies and are suspected of causing cancer . When polyurethanes have reacted completely and no longer contain any monomers, they generally no longer have any harmful properties. Furthermore, volatile additives can be added to the polyurethane, such as flame retardants or plasticizers , which can be absorbed dermally (skin) or inhalatively (breathing) depending on the use. Guidelines and information sheets for the safe handling of polyurethane raw materials can be obtained from the manufacturers or from ISOPA (European Association of Diisocyanate and Polyol Manufacturers).

Polyurethanes result from the polyaddition reaction of polyisocyanates with polyhydric alcohols, the polyols . The linkage occurs through the reaction of an isocyanate group (-N = C = O) of one molecule with a hydroxyl group (-OH) of another molecule to form a urethane group (-NH-CO-O-). In contrast to polycondensation , no by-products are split off.

Only a few different isocyanate components are used:

Due to the high volatility and the consequent dangerous processing of the above monomers, in most cases only prepolymers are used by processors, which, however, always contain a residual monomer content. This is particularly the case with HDI. The usual residual monomer proportions in HDI trimer products (e.g. Desmodur N, Tolonate HDT, Basonat or Duranate) are <0.5% HDI and are therefore classified as non-toxic according to the manufacturer's classification and thus in the professional area, taking into account the manufacturer's protective instructions usable.

The later properties are essentially determined by the polyol component, because in order to achieve the desired properties it is usually not the isocyanate component that is adapted (chemically changed), but the polyol component. Mechanical properties can be influenced depending on the chain length and number of branches in the polyol. For example, the use of polyester polyols in addition to the more common polyether polyols leads to better stability, because polyester polyols have a higher melting point and thus solidify when the polyurethane is applied.

Polyurethane formation requires at least two different monomers, in the simplest case a diol and a diisocyanate. The polyreaction takes place in stages. First, a bifunctional molecule with an isocyanate group (-N = C = O) and a hydroxyl group (-OH) is formed from diol and diisocyanate . This can react with other monomers at both ends . This creates short chains of molecules, so-called oligomers . These can react with other monomers, other oligomers or polymers that have already been formed .

Linear polyurethanes can be crosslinked with an excess of diisocyanate. The addition of an isocyanate group to a urethane group forms an allophanate group.

By trimerizing three isocyanate groups, it is also possible to form an isocyanurate group. If multifunctional isocyanates are used, the highly branched polyisocyanurates (PIR) are formed, see there.

Alternatively, crosslinked or branched polyurethanes can also be produced by adding substances with more than two isocyanate groups, such as PMDI , and triols, such as glycerol . The use of multiple amines, such as ethylenediamine , also leads to crosslinking. The reaction of isocyanates with amines leads to urea groups.

These are still reactive and allow the addition of a further isocyanate group, forming a biuret group.

If a certain polyurethane is to be produced in practice, there are two options: The direct reaction of a polyol with a polyisocyanate (one-step process) and the two-step process. In the two-stage process, two prepolymers are produced in the first step : with diisocyanates in excess, an NCO prepolymer is obtained when reacting with diols and an OH prepolymer is obtained when reacting with an excess of diols. Only in the second step does the actual polymerization take place by mixing the prepolymers. The two-stage process leads to a very wide-meshed crosslinking of the polymer and is important for flexible PUR foams.

If a smaller amount of water is added to the reaction mixture, water reacts with isocyanate groups to form the corresponding unstable carbamic acid , which decomposes to form the amine with the elimination of carbon dioxide (CO 2 ) . This amine reacts with another isocyanate group to form the corresponding substituted urea . The release of CO 2 therefore does not lead to a termination of the polymerization. The resulting carbon dioxide foams the reaction mass.

The density of the foam produced can be varied by the amount of water added .

As a rule, both the polyols and the polyisocyanates originate from the production of petrochemical raw materials, but polyols based on vegetable oils or lignin can also be used, see polyols . Castor oil can be used as a triol in coatings. 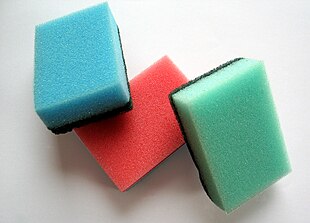 Spray cans for the production of PU rigid foam

Foams can be made very easily from polyurethane. The special thing about PUR foams is that processing companies take semifinished product (foam in tailored form) or foams made of liquid components in place to establish ( situ , "Formed in-place foam") can. The components can also be brought into or onto industrial parts; this is where the foam is created.

Soft PUR foams are used for a wide variety of purposes, especially as upholstery material (e.g. for furniture or car seats) as mattress foam, as carpet backing material, for textile lamination, as a cleaning sponge or as a filter material. PUR flexible foams are mostly open-cell and are available in a wide range of hardness and density.

PU rigid foam panels are available in different densities. Some of the products have fillers ( glass microballoons , aluminum powder ). Intended use are insulation materials as well as model and fixture construction . The foam is usually machined for this purpose .

In the past, polyurethane foams were flame retardant with pentabromodiphenyl ether . Because of the toxicity of this substance, other flame retardants such as TCPP or expandable graphite are used today .

One of the most important uses of polyurethanes is in paints and coatings. Here, because of their good adhesion properties , polyurethanes are used as primers and because of their high resistance to solvents, chemicals and weathering as top and clear coats in many areas of application. These include B. also coil coating lacquers and coatings for floors . Textile coatings and finishes as well as leather finishing should also be mentioned . Flat applications for bonding different, preferably flexible materials (in the area of ​​shoes, wood / furniture, automobile interiors) are also an important area of ​​application for polyurethane systems. In medicine, polyurethanes are used as liners in prosthetics of the lower extremities.

Liquid systems, such as moisture-curing prepolymers, 2-component systems, high solids, polyurethane solutions and polyurethane dispersions , but also solids, e.g. B. Granules (TPUs) or powders that are melted or dissolved.

Insulation layer made of rigid polyurethane foam when building a house