The title of this article is ambiguous. Further meanings are listed under fin (disambiguation) .

A fin ( Latin pinna ) is a broad or hem-like drive, control and stabilization organ of animals or stages of development of animals that live permanently in water. In the narrower sense, fins are understood to mean the corresponding organs of the fish , and in a broader sense also the corresponding organs of terrestrial vertebrates such as penguins , sea ​​turtles , whales and other marine mammals and various invertebrates . 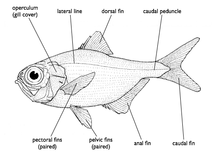 Fins consist of a structure connected to skin folds (fin skin), the fin rays . In bony fish these rays are ossified, cartilaginous fish have horn rays . The fin rays are anchored in the muscles with fin ray carriers. Some fish species also have skeletal fins ( adipose fin , see below).

The fin rays of the bony fish are divided into hard (also spiked rays) and soft rays (also limb rays). Hard rays are undivided, mostly smooth pieces of bone, soft rays consist of two halves that have grown together. A distinction is made between different forms of soft rays:

Real hard rays can only be found in the barbedfish . In some fish, some hard rays are provided with poison glands (e.g. the scorpion fish , weever , rabbit fish ) and a saw-shaped profile on the back is also possible.

Most fish have seven fins. They are paired and unpaired (individual fins) on the fish body. The paired fins are homologous to the limbs of the terrestrial vertebrates (Tetrapoda), but have no connection with the spine , except for the meat fins .

Dorsal fin of a chub ( Leuciscus cephalus ), the fan-like division of the soft rays is clearly visible

Some species ( catfish , tetra , salmon-like ) also have a skin sac filled with fat, the adipose fin, between the dorsal and caudal fin .

In adaptation to the respective habitat, this basic configuration is partially significantly modified in many fish, so fins can be divided, grown together or greatly changed in shape and even completely missing. Functional adjustments could go so far that the respective fin can no longer be used as an organ of locomotion according to its original purpose.

The function of the dorsal fin or dorsal (abbreviation D ; short for Latin pinna dorsalis ) corresponds to that of a keel, that is, it stabilizes the vertical position of the fish in the water. It can be divided into several parts (e.g. perch ) or a whole series of small sections (e.g. Flössler ). The length of the dorsal fin and its position on the body is very variable. Usually there are hard rays in the front part of the dorsal fin or there is a completely hard-rayed front dorsal fin. The sticklebacks even have completely free and mobile spines in front of a rear dorsal fin. In some cases the hard rays have a locking mechanism that allows them to be held upright without muscle strength. The dorsal fin is only missing in very rare cases (e.g. electric eel ).

Corresponding to their function as height control, brake and stabilizing organ, a pectoral fin or pectoral (abbreviation P ; short for Latin pinna pectoralis ) is usually flexible, soft and transparent. Pectoral fins are connected to the skull via the skeleton and are therefore almost always located directly behind the gill covers. Occasionally, as is the case with many catfish , the leading edge is reinforced by hard soft rays. These fins can also be missing, for example with moray eels . Wrasse and surgeon fish swim through simultaneous beats of the pectoral fins (labriform), here the pectoral fins are the main driving organ.

These fins are usually relatively small, they take on control functions. The position on the fish's body varies between belly, chest and, in rare cases, still in front of the pectoral fins, throaty. Of all fin species, these fins are most often missing, including eels , sea ​​wolves and most puffer fish relatives without ventral fins.

Together with the caudal stalk, the caudal fin is the main driving organ in many fish. Fish usually generate propulsion by pushing their body forward through the water with powerful, side blows. The body of the fish performs strong, wave-like movements along its axis. The rays of the caudal fin are directly connected to the spine. Only in very few, highly specialized species, such as B. the seahorses , the caudal fin is missing.

Tail fins are divided into six different types according to their anatomy (see graphic): 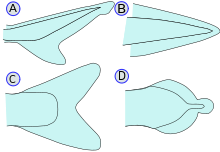 The number and type of fin rays can be described with the help of the so-called fin formula .

The information on the individual fins is made up of three components: fin designation, number of hard rays, number of undivided and divided soft rays.

Often not all fins are listed in the fin formula. In particular, the information on the caudal fin is often missing, as this is less significant and can be more difficult to count due to the pre-rays.

Notes on the evolution of the fins

Importance of the fins for the system

The shape, structure and number of fins are characteristic of a species and therefore play an important role in its description and determination.

Development of the caudal fin skeleton of bony fish

Despite its small size, the skeleton of the caudal fin - the rear end of the spine - has an astonishing variety of features, which has increasingly been recognized as being systematically important (T. Monod 1968). Within the ray fins we find a higher differentiation of the spinal column end, comparable to the evolution in birds from about the Archeopteryx stage. So here is an overview.

Skeletal rear end of a fish of unknown species stranded on the Adriatic coast. The caudal spine has been violently kinked. The kinked piece is of interest here.

Since the tail fin of the real bony fish (Teleostei) is becoming more and more important for propulsion compared to the rest of the tail, the tail fin becomes larger and, above all, stiffer. It does this by fusing the bones involved ( synostoses ). The tuna are at the peak of development , but the Loricariidae also show a high degree of merging. Furthermore, Gonorynchus , for example , who has perfected the method of escaping his enemies by dipping into the sand at lightning speed - this requires strong acceleration through the caudal fin.

All the vertebrae that lie behind the bifurcation of the dorsal aorta (main artery) are called "caudal vertebrae" . In fish, the aorta runs under the spine in the hemal canal, protected by vertebral processes, from the head (gill basket) to the caudal fin. In the tail section of the body, these processes are united to form hemal arches. A distinction is made between prural vertebrae (PU) and ural vertebrae (U). Originally there were up to ten ural vertebrae ( acipenser ), at Hiodon eight are created.

The illustration shows the bent end of a spine, which here consists of three prural vertebrae. The rearmost one (PU 1) is a half-vortex (the PU are numbered from back to front). It is hollowed out like an hourglass at the front to accommodate an intervertebral chorda nucleus. The rear half, however, is narrowed and fused with two ural vertebrae (which can only be found outlined). The intergrowth complex PU1 + U1 + U2 is called urophore. It is a feature of the higher forms.

The long bone plates attached to the adhesions are also important. Usually there are four or five hypuralia (HU). The hypuralia are transformed (mostly widened) hemal appendages of former Ural vertebrae. Since they are bent up dorsally , the bone plates had space to widen into a fan to which the caudal fin rays attach at the rear.

In the picture we see the three lower hypuralia fused to PU 1 without a seam (it is unclear for HU 4). The parhypural (the hemal process of PU 2) and dorsally the stegural (descendant of the neural process of PU 1) are obviously also involved in the tail skeleton. The smaller lateral uroneuralia (descendants of the neural arches of ural vertebrae), of which there are usually two or three pairs, have already been lost . But uroneuralia can also fuse with the complex, as Gonorynchus shows.

Differentiation of the muscles and swimming techniques

The evolutionary problem with swimming has been that the large core muscles work inefficiently when the fish swims slowly or for short distances. Therefore, a lateral differentiation was initially created (near the sideline ): “Red” ( myoglobin-rich ) muscle fibers alone are responsible for swimming calmly. The large “white” part is then only used to escape or to pursue prey. The "white" muscles are responsible for oxygen and tire quickly. The trunk muscles of the anchovies are not divided into “red” and “white” - they are always nimble swimming animals.

When differentiating between “red” and “white”, the much larger “white” portion is inevitably moved with it even when swimming calmly, which costs energy. Many fish families have therefore produced even more "ingenious" solutions. They only use the smaller muscles of the fins for smooth movement. The white trunk muscle (which is divided by plates of connective tissue) is used solely to attack and flee.

Depending on the presence and the formation of the fins and their neural control, several types of locomotion have developed in the fish.

Movement with the core muscles

The following types use the core muscles to move. The list begins with winding the whole trunk, followed by types with a shorter trunk and with increasing importance of the caudal fin.

Aphanopus carbo (Scombroidei) swims anguilliform, but when this pelagic predator spots prey, its trunk stiffens and it "sneaks up" ostraciiform (very small caudal fin). Theelectric rays (tail only!) And the elephant fish (Mormyridae) with stiffened tails (the muscles are transformed into an electrical organ)show echoes of ostraciiform swimming.

Smooth swimming thanks to the movement of the fins

Sequence of movements when undulating the pectoral fins in a real ray (Rajidae). Undulation is one of two modes of locomotion that most rays use to create their propulsion .

In the following types of locomotion, no core muscles are used for slow swimming, and most of the time neither the caudal fin is used. Instead, other fins are used, for example with undulating movements (undulation). The caudal fin, if present at all, is usually only used for steering.

The fins of the whales are called fluke for the caudal fin, flipper for the pectoral fin (pectoral fin ) and fin for the dorsal fin (dorsal fin).

Also as fins are designated with the like fins converted extremities sea cows , seals (Pinnipedia, which means "pinniped") and the platypus .