The collar shark ( Chlamydoselachus anguineus ), also frilled shark or snake shark , is one of two species from the family of collar sharks (Chlamydoselachidae). It is the most ancient recent shark in terms of its anatomy and morphology , which is why it is referred to as a " living fossil ". The generic name is derived from the Greek words chlamýs (f, -ýdos) "masculine. Upper garment, collar ”and seláchos (n, -ous) “ shark, ray ”derived. The Latin epithet anguineus for the species means "snake-like".

The teeth of the lower jaw

The long, eel-like body of the collar shark reaches a length of up to two meters, with the males being about 1.50 meters in length smaller than the females. The basic color is dark brown to dark gray, there are no drawings or noticeable markings. The eye openings are large, a nictitating membrane is not formed. In contrast to the other recent sharks with a lower mouth , the blunt mouth of the collar shark is almost terminal, so it does not form a rostrum . The mouth is very large and extends over more than half of the skull, which gives the head a reptile-like appearance (hence the French common name requin lézard = "lizard shark"). It can be opened wide. The approximately 300 teeth are arranged in rows, 19-28 in the upper jaw and 21-29 in the lower jaw . The similar morphology of the teeth ( homodontics ) is characteristic of the species: The tooth crown is formed by three roughly equally long, slender, bent-back tips, while smaller tips can be developed at the tooth base. The individual teeth have a large lateral distance from one another. 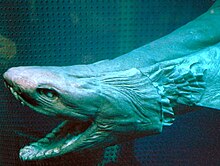 The anatomical features of the head and neck region

The partitions of the six pairs of gill slits (with almost all other plate gills including the Paleozoic forms there are five) look out like a frill and encircle almost the entire cross-section of the body, hence the German name "Krausenhai". The first pair of gills are connected to one another on the ventral side ( ventral ) and have a collar-like covering skin ("collar shark"). There is no proper joint between the upper jaw and the skull (neurocranium). In contrast to most other sharks, the palatoquadratum of the upper jaw hangs broadly on the skull. 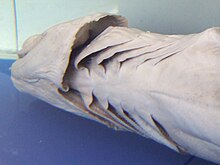 The gill slits run almost completely around the neck

The broad pelvic fins are small and attach to the trunk at a very obtuse angle. The mating organ of the plate gill, the pterygopodium , is built much more simply in the collar shark than in its relatives and consists of only two rod-shaped elements. The base of the single dorsal fin is above the anal fin and therefore unusually far back. The caudal fin is, since the notochord, unlike in other recent sharks, almost straight towards the end of the body ( caudal ), is only hinted at heterocercially (unevenly lobed). Their asymmetry, which is characteristic of the caudal fin of most sharks, results from the enlargement of the lower fin edge.

The notochord is barely articulated. The placoid scales (skin teeth) formed in many cartilaginous fish are elongated along the open lateral line organ in the collar shark .

Distribution areas or fishing sites of the collar shark. According to Compagno et al. 2005

The first catch of a collar shark took place in the Bay of Tokyo in 1870 , later the species was caught sporadically in different places in the northern and southern hemispheres of the earth, so that a worldwide distribution in the deep sea can be assumed. It was caught in the eastern Atlantic off Norway , Scotland , Portugal , Spain , Morocco , Mauritania , Madeira and in the Bay of Biscay . In the western Indian Ocean it is known from the east coast of Africa, in the western Pacific from the coast of Japan and Australia and in the eastern Pacific from the southern coast of California and northern Chile . 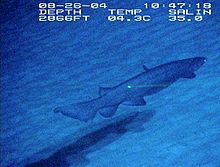 Probably the first image showing a collar shark in its natural habitat , here at a depth of around 875 meters.

The way of life of the collar shark is almost unknown, as it has only been caught relatively rarely and has never been observed for longer. The collar shark probably lives on the bottom or in the deep open water ( mesopelagial ) of the deep sea ( bathyal ) on the continental and island slopes, usually at a depth between 120 and 1280 meters. As far as is known, its diet consists mainly of squid and other cephalopods , as well as deep-sea bony fish . The shape of the teeth, as well as the set-back position of most of the fins, suggest a snake-like strike of the prey. As with all sharks, an internal fertilization also takes place in the collar shark . Like most cartilaginous fish , the species is ovoviviparous , so the embryos complete their development in the womb and are born alive. The development time of the 2 to 12 boys takes about two years, according to a Japanese study even at least 3.5 years. If further research confirms this, this would be the longest known gestation period in a vertebrate animal, almost twice as long as that of the African elephant . The size at birth is around 40 centimeters and sexual maturity is around 95 cm in males and around 135 cm in females.

As a rule, collar sharks are only seen by chance as bycatch of deep-sea line fishing , and the animals are then mostly already dead. On January 23, 2007, however, a living female of 1.60 meters in length was found off the coast of the main Japanese island of Honshu be caught. In the basin of an aquatic zoo, scientists obtained unique film recordings of the animal, which however died after just a few hours.

Collared sharks are somewhat isolated in the shark system, to which over 400 recent species belong, due to their many special features. However, while the eel-like shape or the number of gill slits cannot clearly be considered original features, other species-specific features such as z. B. the missing rostrum, the simply built pterygopodium, the non-heterocercial caudal fin, the barely articulated notochord, and the cladodont teeth are undoubtedly primitive.

Currently, the collar sharks are considered a sister group of the comb- toothed sharks (Hexanchidae) within the Hexanchiformes . According to current knowledge, this represents the sister group of all other Squalea , which in addition to several shark orders also includes all orders of rays .

The collar shark is rarely fished but can be a regular bycatch in some regions with more intensive deep-sea fishing . As such, it is then used to make fish meal , for other residual fish recycling or dumped back into the sea - there is no direct commercial use for this species. It is believed that by-catches will increase as deep-sea fisheries expand in Asia.

In the Red List of Threatened Species of IUCN is (as a sort of early warning he Near Threatened Near Threatened =) classified, is but noted that he already threatened ( Vulnerable ) could be. There are no population estimates for this species, it is generally considered to be rare.