As fish meal to which the thickened press juice can be added referred dried and ground fish or parts of fish ( fish full meal ). Inshore fishmeal can contain moderate amounts of bycatch , particularly crustaceans, starfish and mussels.

It is used as an admixture to animal feed , e.g. B. in aquaculture and in pig and chicken feeding (3–4%). The biological value depends on the raw materials, it decreases with the decreasing amount of fish meat. Feeding fishmeal to cattle was banned in the EU because of the BSE problem. Due to the increased prices for plant-based feed, an EU decision allows fish meal to be used again in calf and lamb rearing. In Switzerland, too, fish meal may be used as a component of feed for non-ruminants and powdered milk replacer feed for calves under certain circumstances. The use for supplementing compound feed for chickens is increasingly being substituted by the use of the sulfur-containing synthetic amino acid DL- methionine and the hydroxy analog of methionine. 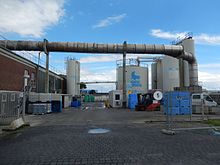 In the past, fishmeal was mainly produced from waste that arose after the filleting of edible fish . In the last few decades, however, a branch of deep-sea fishing has also emerged, which catches certain types of fish exclusively for fishmeal production. This practice is sometimes considered critical because these fish to the ecosystem are withdrawn and similar to the edible fish herring and cod , the overfishing and extinction of individual species of fish threatened. In addition, it is criticized that the traditional fishing grounds of the local population are affected, the protein-containing products are sold in the rich industrialized countries and only a few companies benefit from them.

The main suppliers of fishmeal are Chile , Peru (world's largest producer), Denmark , Norway and Panama . Smaller suppliers include the Faroe Islands , Iceland and India . Before it is imported into the European Union, fish meal is officially inspected for salmonella and foreign additions , in particular animal meal , feather meal or meat meal .

In the summer of 2017, the EU decided to ban the ethoxyquines used for preservation if it cannot be proven that the substances are harmless to consumers. If the industry fails to provide this evidence, use will be prohibited from 2020.