This article deals with the cultural historian. For other people see Jakob Burckhardt or Jakob Burkhard . 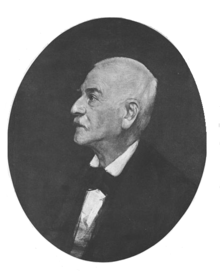 Jacob Christoph Burckhardt (born May 25, 1818 in Basel ; † August 8, 1897 there ) was a Swiss cultural historian specializing in art history . He taught at the University of Basel for decades . He was well known for his book The Culture of the Renaissance in Italy . 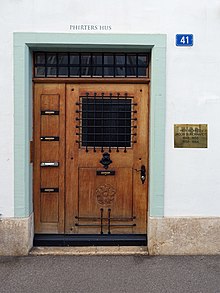 Jacob Burckhardt was born in Basel in 1818 as the fourth of seven children. He came from an old and successful family of the Basel Daig . His mother was Susanna Maria Burckhardt-Schorndorff (1782-1830). Several ancestors were clergy, including his father Jakob Burckhardt the Elder (1785–1858) was pastor of the Reformed Church in Basel. Since he was head of the Münster community, he was also Antistes and thus head of the Basel clergy. Burckhardt received a comprehensive humanistic education at home and at high school. His teachers gave him excellent knowledge of French, Italian and the ancient languages ​​and encouraged his historical and literary inclinations. In order to deepen his language skills in French even further, he lived from 1836 to 1837 with the Godet family in Neuchâtel. In 1835 Burckhardt met Heinrich Schreiber and their friendship lasted until Schreiber's death. 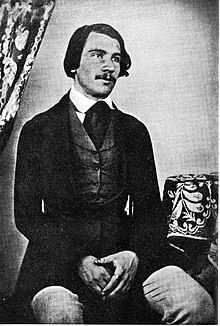 Honor grave in the Hörnli cemetery

In his hometown Jacob Burckhardt studied since 1837 at the request of his father Protestant theology . At the same time, he was already involved in history and philology . After four terms he moved to the University in Berlin to himself to the study of history, art history turn and philology. During this time he became a member of the Swiss Zofinger Association .

In Berlin from 1839 to 1843 he attended lectures by Leopold von Ranke , Johann Gustav Droysen , August Boeckh , Franz Kugler and Jacob Grimm, among others . It was here that Jacob Burckhardt made the acquaintance of Bettina von Arnim . In the summer of 1841 he spent a semester at the University of Bonn , where he joined the Maikäferbund , a late romantic poets' association around Gottfried Kinkel .

Because of Ranke's two works on Karl Martell and Konrad von Hochstaden , Jacob Burckhardt received his doctorate in Basel in 1843 in absentia . In the following year he completed his habilitation there in history and became an associate professor in 1845.

After completing his doctorate, he stayed in Paris for a few weeks, mainly dealing with French and Spanish art. Here he worked intensively in archives and libraries. In the years after 1844, Jacob Burckhardt worked temporarily as a political editor for the conservative Basler Nachrichten . In 1845 he interrupted this activity for the first time and later gave it up completely because his articles on the tense domestic political situation in Switzerland were controversial. Between 1846 and 1848 he stayed in Italy twice for a few months and in the meantime lived in Berlin , where he participated in the drafting of Brockhausschen Konversationslexikons . In 1848 he completed the lecture series "The Roman Empire" and a year later the lecture series "The golden age of the Middle Ages". As a result of a trip and study on site in Italy in 1853, the poetry collection appears in dialect E Hämpfeli Lieder .

From 1855 to 1858 Jacob Burckhardt was a full professor of art history at the Eidgenössisches Polytechnikum in Zurich . In 1858 he took over the chair for history and art history at the University of Basel , which he held until 1893. From then on he concentrated on his lectures, which initially covered all epochs of European cultural history and since 1886 had exclusively focused on art history. In addition, he emerged as a skilled speaker through public lectures. 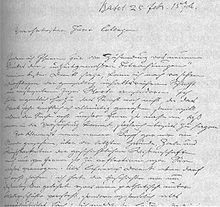 Burckhardt's letter to his colleague Nietzsche dated February 25, 1874 with a comment on Nietzsche's On the benefits and disadvantages of history for life

Even Friedrich Nietzsche , who came to Basel from Leipzig as Germany's youngest university professor and was already considered a philological capacity at the age of twenty-four, praised Burckhardt as "our great, greatest teacher." Nietzsche often tried to get into conversation with his older colleague and probably also attended one of his lectures. Burckhardt, conversely, saw the talent of the young Nietzsche, but kept him politely at a distance and probably could not do much with his later philosophical works.

In 1872 Burckhardt turned down the offer to succeed Rankes at the University of Berlin. The last thirty years of his life he devoted himself entirely to teaching in Basel and did not publish any other works during this time. The art historian Heinrich Wölfflin (1864–1945) was one of his students . In 1886 Burckhardt gave up his professorship, but held the art history lectures for another seven years. The term "terrible simplificateur" much used in the German-speaking world (worse simplifier, Flat thinkers) was coined by him, he first appears in a letter Burckhardt to Friedrich von Preen of 24 July 1889. Burckhardt also professed the virtue of "dilettantism", to which he recognized the ability to provide an anti-specialist overview.

Burckhardt had already written down in 1891 that he wanted to be buried where he died. The grave should be a smooth stone, with the name and the date of birth and death. So he found his (temporarily) final resting place on the Wolfgottesacker . In 1931 the government council of Basel-Stadt decided to permanently close various cemeteries in Basel for 1951 and to provide Burckhardt with a dignified grave site in the Hörnli cemetery . 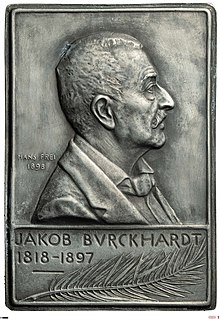 Plaque in honor of Jakob Burckhardt, 1898

A simple plaque with his portrait was posthumously dedicated to Burckhardt for his achievements, which was made in 1898 by the medalist Hans Frei .

As early as 1930, on the initiative of Bertha Stromboli-Rohr (1848–1940), Burckhartd's great-nephew and painter Hans Lendorff (1863–1946), J. Alphons Koechlin (1885–1965), President of the Church Council of Basel-Stadt, proposed that Burckhardt, how even his father was to be buried in the cloister of Basel Minster . Out of piety and out of consideration for Burckhardt's last wish, this project was not carried out. Finally, Burckhardt was exhumed on October 14, 1936 and the wooden coffin was transferred to the Hörnli cemetery. Burckhardt's great-nephew, August Simonius -Bourcart (1885–1957) and his family later found their final resting place in the abandoned grave. Burckhardt's grave in the Hörnli cemetery was designed by the Basel architect Otto Burckhardt (1872–1952). Another great-nephew of Burckhardt was Felix Staehelin .

On the way to his lecture, Jacob Burckhardt passed Basel Minster , 1878

Burckhardt's stays in Italy and the collaboration on Franz Kugler's handbooks on art history resulted in a reorientation towards the classic ideals of the Winckelmann , Goethe and Wilhelm von Humboldt epochs . Burckhardt took on more and more of a European-humanistic perspective and moved away from the prevailing paradigm of political history (cf. Raupp, column 855). This can be heard above all in his three "classical" works, which made him an outstanding cultural historian and co-founder of modern art history. Burckhardt resolutely contradicted historical-philosophical speculations, which viewed history as the temporal development of a superordinate, eternal historical process. For him the only constant phenomenon in history was human nature. The goal of existence and the whole of history remained a mystery to Jacob Burckhardt.

Burckhardt's first major work, published in 1853, is The Time of Constantine the Great, which he understood as a necessary transition from antiquity to Christianity and as the basis of medieval culture (cf. late antiquity ). In contrast to the prevailing view of the time, Burckhardt saw Emperor Constantine in a rather negative light, as a pure power politician whose turn to Christianity was only due to political considerations. In 1855 his second work Cicerone appeared, in which he describes the Italian art world from antiquity to the present.

For a long time this term was used as an epoch designation in art history. The first to use it directly for a historical epoch was Jules Michelet . It was only through Burckhardt's studies of Italian culture in the 15th and 16th centuries and the publication of his results that the "renaissance" was noticed in public opinion. The work is still considered the standard work on this era. In it Burckhardt paints an overall picture of Italian Renaissance society; This first comprehensive presentation of that epoch had a strong impact on the image of the Renaissance in Europe and became an exemplary work of cultural historiography. Georg Voigt, on the other hand, examined the movement of Italian humanism as a phenomenon of intellectual high culture. Both have in common the recognition that the Renaissance introduced modernity in Europe; they are both considered the founders of modern Renaissance research.

After his death, Burckhardt left four unpublished works ready for printing, including memories from Rubens . Greek cultural history and the widely read world historical considerations were also published from the estate . Burckhardt never intended to publish his course "On the Study of History", which he held three times from 1868 to 1872. While he was still on his deathbed, he gave his nephew Jacob Oeri (1844–1908) the task of having all the handwritten remains crushed, but Oeri was able to get him to inspect it. It was certainly not Burckhardt's intention that this insight should take several years and end with a publication. As is not uncommon in multiple lectures, the scripts are available in several versions, interspersed with inserts and updates. The handwritten material preserved - not counting the transcripts of students - is about twice as extensive as the text that Oeri then published for the book edition of 1905. Oeri's boldest innovation was probably the change in the title to World History Considerations , which Burckhardt's introductory lecture was supposed to bring closer to Nietzsche's Untimely Considerations .

Burckhardt's works were frequently published and translated. More than 1,700 letters from Burckhardt's lively correspondence have been preserved and have also been published. In autumn 2000, the publication of a new critical complete edition began in the publishing house CH Beck , a 27-volume company. Volumes 1 to 9 are dedicated to the writings published by Jacob Burckhardt himself or those prepared for publication, volumes 10 to 26 contain the works, lectures and lectures from the estate, volume 27 contains the index. 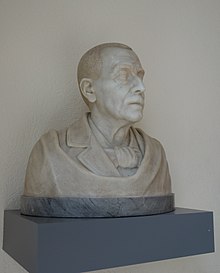 A street is named after Jacob Burckhardt in Basel, Zurich and on the German side in Konstanz and Freiburg im Breisgau. The Jacob Burckhardt Prize of the Johann Wolfgang von Goethe Foundation in Basel is named after him, which is awarded for exemplary artistic achievements, as well as the prize of the same name, which is awarded by the Art History Institute in Florence - Max Planck Institute to young scientists of the Art history is awarded.

The highest banknote in Switzerland, the 1000-franc note , has been bearing the portrait of the Basel cultural historian since 1995.

Published from the estate: