Squid is a redirect to this article. Further meanings are listed under Squid (disambiguation) .

The article needs to be revised: there is no information on diet.
Please help to improve it , and then remove this flag.

The cuttlefish ( Coleoidea or Dibranchiata ) are a subclass of the cephalopods , which are characterized by a housing enclosed by soft tissues or its rudiments and the possession of an ink bag . The best-known groups within the cuttlefish are the cuttlefish (Sepiida), the squid (Teuthida) and octopus (Octopoda).

In technical terms, squids are also called coleloids . In some general and popular science texts they are called squid to show that they belong to the molluscs . Squids are not fish (because they are vertebrates ).

Colloquially and historically only frequently cuttlefish as "squid" means. The cuttlefish form only one of four groups within the ten-armed squid (Decabrachia). There are also eight-armed squids (vampyropods) with three subgroups. The extinct belemnites (Belemnoidea) are also counted among the squids (Coleoidea) , since ink bags have been detected in some complete specimens (see section Systematics ).

Around 800 species are currently known from today's seas, and new species are constantly being described. In the fossil record more about 2000 species have been identified.

The oldest finds that can be safely assigned to the octopus come from the Lower Carboniferous of North America. Finds of octopuses from the Lower Devonian of Germany have not yet been confirmed. 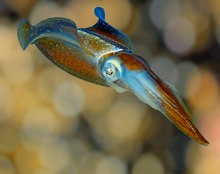 The internal hard parts and the ink bag differentiate the squid from pearl boats in the broader sense (Nautiloidea) and ammonites (Ammonoidea). These other subclasses of cephalopods have a calcareous exoskeleton and do not have an ink pouch.

Octopuses have a larger ink pouch, so they can use it more often in a row than squids . With squids, the ink bag is sometimes so small that it only suffices for emptying through the siphon . This already indicates that the primary defense strategy is not, as is commonly assumed, to build a smoke screen. In reality, the ink secretion forms a relatively small, compact cloud of pigment granules that floats where the recoil squid was a moment before. The attacking predator should mistake the ink cloud for the prey animal and lose time with its false attack, which the octopus uses to successfully escape. In fact, one can often observe how predatory fish ( e.g. plaice , turbot ), which snap into the cloud, only then cause the pigments to be swirled over a wide area and thus fog themselves. The blue color of the ink secretion is due to copper proteins .

All coleoids have two kidneys, a heart and two branchial or gill hearts (atria). Your nervous system shows a high degree of centralization and forms a brain at the back of your head.

In terms of their body size, their ability to move and react, the squid clearly surpass all other molluscs. Squids are the most intelligent mollusks. After the vertebrates, they have one of the highest forms of organization in the animal kingdom.

RNA editing , which is rare among animals, takes place in cuttlefish .

Superorders and orders of the subclass cuttlefish (Coleoidea):

Just like fish, squids are part of human food . The most popular are cuttlefish, squid, and octopus, often referred to as squid , calamari, or calamaio through international trade , regardless of biological taxonomy.

In the trade, squids are offered whole or in pieces (tentacles, rings, fillets), fresh, frozen (partially pre-cooked), smoked or canned . In preparation , the chitin leg is removed in principle. Depending on the size of the animal, inedible parts such as the head, chewing tools, larger suction cups and the innards are also removed. Larger animals are pre-cooked in a herbal broth before preparation .

Several standard preparations have emerged, which are supplemented by some ingredients regionally.