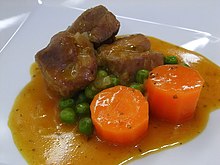 Ragout ([ ʀa'gu ], from French ragoûter , 'to stimulate the palate', 'to whet your appetite') is a type of dish consisting of diced pieces of meat , poultry , venison or vegetables in an often creamy sauce . The term was borrowed in the 17th century from the synonymous French ragoût .

A distinction is made between light and brown ragouts: For brown ragouts, the pieces of meat are seared until they have a brown crust all around; they are mostly stews; for the light ragouts, white meat is steamed with onions (e.g. veal fricassee). Whether the ragout is thickened with flour depends on the recipe in question, meat cubes are usually dusted after searing, for some ragouts no flour is used at all (e.g. seafood or Viennese juice goulash ). However, a light ragout should not be confused with a blanquette .

In France, the term fricassee used to refer to various light or brown ragouts, but today fricassee is made from white meat in a similar way to a blanket .

Ragoût fin is a ragout made from veal and / or young beef with an addition of poultry meat (breast, leg without skin), sometimes also veal tongue .

Pörkölt is a ragout-like meat dish in Hungarian cuisine.

Ragouts can be filled in crusts as a starter . Is the use of offal or other anatomical parts indicated (eg. As tongue ragout , kidney stew), stews can also contain bone (z. B. oxtail stew ).

Comparison of brown ragout and goulash

As with goulash, meat parts with a higher proportion of connective and fatty tissue are used for ragouts . When preparing a ragout, the meat cubes are first fried and then the onions are added, with goulash the order is reversed, as the original Hungarian goulash is steamed and therefore does not belong to the brown ragouts.

When white ragout or Blankett (French blanquette ) is mostly white meat such as chicken, veal or rabbit first alone or with greens cooked and from the resulting broth a white sauce prepared with roux bound with egg yolk and cream alloyed is. The result is a light, very mild dish with a lot of sauce.

The seasoned meat offered in restaurants, especially in eastern Germany, is a simplified ragout fin , but is made with poultry or pork. The meat is cooked in broth and then cut into small pieces. A light sauce is made from the broth. Pieces of meat and sauce are gratinated with cheese and served with Worcestershire sauce , lemon and toast. The dish comes from the recipes of the HO restaurants in the GDR and is now mostly served as a starter or as a small main course.

A hash is prepared like a ragout from particularly heavily chopped ingredients.

A sauce tied with whole fruit or pieces of fruit is often referred to as a fruit ragout or fruit ragout - or, after the individual fruit, as a cherry ragout , etc. Cherries, raspberries, pears and plums are used, for example. Fruit ragouts are mostly served as a dessert, less often as a starter or main course.