As a cream or cream (in Austria, cream and Switzerland Nidel or Nidle ) which is fatty phase of the milk referred to the standing unleavened raw milk floats naturally on the surface or from raw milk centrifuged can be. The terms for cream differ from region to region and are sometimes not used uniformly. From a physical point of view, cream is an emulsion of milk fat in water (the butter made from it by reverse emulsion , on the other hand, is an emulsion of water in milk fat).

Apart from the basic distinction between unleavened and soured cream, there are a number of other milk products, such as sour cream or fraîche crème , which differ primarily in their fat content.

Production of cream and cream products

Cream , cream or cream is produced by creaming the milk . The milk separates itself in that the emulsified milk fat emulsion droplets rise to the surface due to their lower density and float up there as cream that can be skimmed off as such, skimmed milk settles down as a heavier phase. The prerequisite for natural creaming is that the milk has not been homogenized , as this breaks up the fat globules and restructures them, which slows down creaming. As a rule, cream is no longer obtained by creaming, but by centrifugation . The milk fat is separated off as much as possible, so that the remaining skimmed milk only has a fat content of 0.03% to 0.06%. The desired fat content of the end product is achieved by back-mixing both products. Goods that are labeled cream must have a minimum fat content of 10%.

Compared to milk, cream contains less milk protein , but more fat and fat-soluble vitamins . It is the raw material for butter and cheese production , but it is also used fresh in the kitchen as “sweet” or soured.

One liter of cream contains around 7.6 kilograms of CO 2 equivalents .

Dairy products made from unleavened cream

The name sweet cream or sweet cream, which is used mainly in Germany, is popular and only serves to distinguish it from sour cream . Sweet cream refers to the fresh, only ultra-high-temperature or sterilized cream in various concentrations that has not been processed further. It serves as an ingredient in many dishes and baked goods, is whipped into whipped cream and used as coffee cream to refine coffee and tea . Condensed milk can easily be confused with sweet cream and is colloquially also called "coffee cream". But it is normally produced from fat milk poorer by dehydration and is one not to cream products - even with fat contents of 10% or 12% should not be offered as cream them.

The unleavened cream is traded under different names depending on its fat content:

Whipped cream with added sugar and bourbon vanilla is known as Crème Chantilly .

Fresh cream on the market is always pasteurized . It keeps refrigerated for four to six days. Other heat treatments must be marked as such on the packaging. The warming associated with the preservation causes a change in taste and a denaturation of the proteins contained in the cream, which makes the product somewhat more digestible. Ultraheat cream lasts up to six weeks without refrigeration, and sterilized cream for up to a year. Stabilizers that are added to the cream to prevent further creaming must also be identified. The most commonly used stabilizer is carrageenan , but it also changes the taste of the cream. The creaming of the cream, which is shown by a firmer layer on the surface of the cream, is not, as is often assumed, an indicator of poor quality cream, but rather an indication that the cream does not contain any stabilizers.

In English , the expression half-and-half is common for a mixture of whole milk and cream in roughly equal parts. Such a product is essentially the same as coffee cream; According to American regulations, half-and-half must have a fat content of at least 10.5% and less than 18%.

Sweet cream with a high fat content - at least 30% - is therefore whipped cream (or whipped cream or whipped cream called) because they can be open to a loose cream. This is done by hand or by machine with a whisk, or with professional equipment such as the cream blower or the cream machine . Whipped cream is enjoyed pure, sweetened or flavored as an addition to cakes and is used in confectionery as a starting product for creams, cakes and desserts.

Obers is the name for sweet cream in Bavarian and Austria. Colloquially in Austria often equated with cream, it is mostly used as an abbreviation for the three variants, and not generally as a synonym:

Sour milk products made from cream 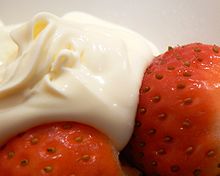 Sour cream or sour cream ( crème aigre , also crème acidulée ) is cream that has been mixed with lactic acid bacteria , which in addition to a slightly sour taste, takes on a firmer, creamy consistency. Sour cream is particularly suitable for binding warm dishes due to its high fat content as it does not flocculate. Sour cream is traded in different variants under these names:

The etymology of the word "cream" is not certain. The word sagina , which occurs in Vulgar Latin, means "mast, food, fat" and is a loan word from a Celtic tribe * soig-men (cf. Welsh hoof , Irish uachthar ), which in turn comes from the Indo-European verb root * seuə-g- “Suck, squeeze” goes back. Via the old French word saime , which means "cream", the word sahne probably came into the German language from the 14th century from the Dutch around Brabant (documented there as sane ) and appears here as a typical urban expression (also in the spelling sane ) for the processed sweet cream.

"Rahm" is the most widespread word for this food in the German-speaking area, although in the areas that also know the word "Sahne" (in Germany) or "Obers" (in Austria) it is used more for sour cream like in Bavaria. Cream is documented as roum in Middle High German from the 11th century and can also be found in Old English as rēam and in Old Norse as rjúmi . In Awestern there is also a root word raoɣna- "butter". The further Indo-European origin of this word is obscure.

If you leave untreated cow's milk and then skim off “the top”, you get to the “top”.