The centrifuge is a technical device that works using inertia ; the functionality is based on the centrifugal force , which comes about due to a uniform circular movement of the material to be centrifuged. This is used to separate materials; the centrifugal separator uses a similar process .

A centrifuge can separate the components of suspensions , emulsions and gas mixtures (see also separation processes ). In research in space medicine , centrifuges are used to simulate the acceleration forces that act on the occupants of a spacecraft during the launch phase.

Centrifuges use the inertia in the material to be centrifuged to separate materials. Particles or media with a higher density migrate outwards due to the higher inertia. In doing so, they displace the components with a lower density , which thereby reach the center. The process is much faster than sedimentation by gravity or is only possible in the first place - counterforces such as adhesion , thermal molecular movement or viscosity are overcome.

This peripheral speed is decisive for air resistance. As a result, many centrifuges can only work in a vacuum.

In this context, DIN 58970-2 refers to the relative centrifugal acceleration ( RZB for short ). This quantity is also specified as a multiple of the mean value of and is used today in most device documentation. According to DIN, the RCF value ("spin number") can be calculated using the following formula, which can easily be calculated from the above formula (here R is the radius in centimeters and N is the speed in revolutions per minute):

There are two possibilities for the simplified application of the conversion: The use of conversion tables, in which the centrifugation radius and either the speed (revolutions per minute; internationally used: revolutions per minute or rpm ) or the relative centrifugal acceleration (RZB; internationally used) are used : relative centrifugal force or rcf) the other value can be determined. Modern laboratory centrifuges also have an automatic conversion from RZB to the corresponding speed, this function is usually marked with "rcf / rpm". 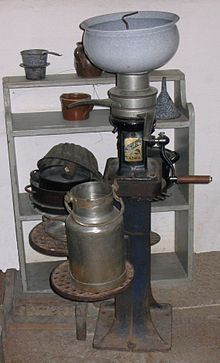 Examples of centrifuges in the home are the salad spinner , the laundry spinner and the fruit juice centrifuge . The wet goods (lettuce, laundry, pomace ) are rotated so quickly in a perforated drum that it is pressed against the wall and water or juice flows out through the holes. This overcomes the adhesion of the liquid to the solids. These and laboratory centrifuges have a direct drive .

Olive oil and mechanically separated meat are also separated from the marc (in the decanter) or from liquids (in the separator ) in this way ; Beekeepers use a honey extractor to extract honey using the same principle . Another area of ​​application for centrifuges is molecular cuisine .

In the metal processing industry, centrifuges are used to de-oil metal chips, with a throughput of up to ten tons per hour in fully automatic operation. A distinction is made between continuous and batch-fed processes. The continuously operating centrifuges have a centrifuge drum, at the largest diameter of which the liquid (e.g. oil) can escape through a sieve. The dried metal chips are thrown out of the drum a little above it. At the point where the liquid emerges, the centrifuge is designed so that the liquid can drain away separately. The dried chips fall out of the open centrifuge housing at the bottom.

Centrifuges operating in batches are typically loaded with filled drums or comparable (perforated) dishes, which are placed in suitable receptacles in the centrifuges. The liquid can leak out of the drum holes and drain. The dried chips remain in the drum and are removed from the centrifuge in it.

Electroplating companies use manual and fully automatic centrifuges for drying bulk goods such as screws, rivets, etc. In the case of scooping parts (e.g. with blind holes), it may be necessary to reposition the parts in such a way that all liquid can run out of the depressions and be thrown off. There are also centrifuges that can pivot the centrifugal chamber and gently circulate the parts at a slow speed (e.g. 20–40 rpm). The liquids are then spun off in a straight position at high speeds. This process can be repeated several times.

Extremely large centrifuges with a filling weight of up to 1,750 kg are used in the sugar industry. In it, sugar crystals are separated from the adhering syrup . Today these centrifuges are mainly equipped with a PLC and frequency-controlled drives. In addition, large centrifuges are used, for example, to dewater sewage sludge in municipal sewage treatment plants , in the chemical industry or in mining to separate minerals.

In industry, technology and in the laboratory , centrifuges are used to separate materials due to different densities. For example, cow's milk is separated into cream and reduced-fat milk (invented in 1877 by Wilhelm Lefeldt ).

In addition to separating liquids of different densities, laboratory centrifuges are used to separate solids from a liquid. To do this, the mixture is poured into centrifuge tubes that are much thicker-walled and therefore more stable than test tubes .

In the past, laboratory centrifuges were driven by a crank , today by an electric motor . Centrifugation is often preferred to filtration , for example if strongly acidic solutions would attack paper filters or if the sludge is to be disposed of by type, i.e. without additional filter aid.

The ultracentrifuge was developed by Theodor Svedberg , who used it to determine the sedimentation speeds of macromolecules and thus their approximate molar mass . He received the Nobel Prize in 1926 . Ultracentrifuges rotate very quickly, with up to 500,000 / min. Your rotor is in a vacuum to avoid air friction.

Gas centrifuges , among other things, are used to separate isotopes .

The tubular centrifuge separates substances of different densities in a semi-continuous process.

Due to the high kinetic energy of high- speed rotors, safety precautions are necessary. The stronger the centrifugal forces in a centrifuge, the more stable the rotor bowl and lid must be. Even in the event of a rotor bursting, the boiler and device housing must protect the area around the centrifuge from injury or damage. In the event of a rotor breakage, stainless steel boilers are much more stable and therefore safer for the user than inexpensive plastic boilers. A symmetrical weight loading of the rotor (balancing of the samples before centrifugation) can significantly reduce the risk of an imbalance during the centrifuge run. Automatic imbalance detection is often built into high-performance laboratory centrifuges in particular. If an imbalance occurs, the centrifuge run is automatically terminated immediately.

Laboratory centrifuges or spin dryers usually cannot be opened as long as the rotor is turning. Safety switches and / or brakes coupled to the cover prevent rotation when the housing is open.

The safety of centrifuges is regulated in the European standard EN 12547. In addition, safety standards are set by the professional associations such. B. the sugar trade association.