Moray eels (Muraenidae) are a family of eel-like bony fish that are distributed in shallow tropical and subtropical seas with around 200 known species. Two species live on the coasts of southern Europe: the Mediterranean moray eel ( Muraena helena ) and the brown moray eel ( Gymnothorax unicolor ). Moray eels are particularly common in the tropical coral reefs : 54 species are counted in the Marianas and the Marshall Islands , in the waters around Hawaii they are the most species-rich family of fish after the wrasse (Labridae) with 32 species .

Moray eels are elongated and laterally flattened, the number of vertebrae is usually between 110 and 200, with a maximum of 260. The body is muscular, especially the neck. The color is often brownish or blackish purple, tropical species are often brightly patterned or light. The pectoral and ventral fins have already completely disappeared in the larvae - in contrast to other eels without paired fins, which still have pectoral and ventral fins in the larval stage . The shoulder girdle is reduced to a thin clasp (origin of the pharyngeal muscles).

The skin is flaky and covered by a thick layer of mucus that becomes sticky in the air and protects the animals from injuries when gliding through sharp-edged rocks or corals. A poisonous skin secretion was found in the Indo-Pacific yellow - mouthed moray ( Gymnothorax nudivomer ). The blood of the moray eels - like that of many, perhaps all other eel species - is poisonous due to haemolytic proteins . The poison can be destroyed by heating above 75 ° C. The lateral line organ of the moray eels is reduced to one to three rows of pores on the head and one to two pores in the gill region. In some species, the pores are bordered in white and are easy to see. 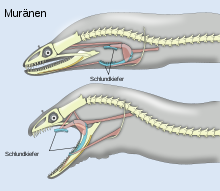 The gap in the mouth is deep, extends far behind the eye and is covered with numerous teeth. In addition to the normal teeth on the edge of the jaw, many species also have pointed bone processes in the middle of the upper jaw. (The skull of the other deviates in this region greatly from the teleosts from.) This "pseudo-teeth" are folded closed jaw. The teeth are an important feature in differentiating the genera and species.

The so-called pharyngeal or pharyngeal jaws, which are held only by muscle ligaments, correspond to parts of gill arches and help to pull larger chunks of food towards the stomach, sit in the throat of the morays.

The gill openings are far back on the head and are small and oval. The gill covers are missing; on the other hand, the Branchiostegalradien that span the gill membrane, are numerous and well developed. Moray eels have to pump the water through the gills by regularly opening and closing the mouth - and because the jockstrap is hardly mobile - a behavior that divers often mistakenly regard as "threatening". If the fish are really threatening, they open their mouths wide and stay that way until the danger is over.

Moray eels have four nostrils, two of which are at the tip of the snout, the other two above the front edges of the eyes. The nostrils are connected by a wrinkled system of canals, which gives a large internal surface and gives the fish an excellent sense of smell. On the other hand, they see very poorly. Both the anterior and posterior nostrils can be elongated in a tubular manner. The front then protrude over the tip of the snout, the rear look like horns between the eyes.

The nostrils are also the most certain distinguishing feature from the similar looking snake eels (Ophichthidae), which also often lack the pectoral fins. All four nostrils of the snake eels are located at the tip of the snout, two of them end in downwardly curved tubes.

All moray eels live more or less hidden in caves, crevices and coral reefs and only leave their hiding place at night to hunt. You swim with the help of meandering movements of your whole body. During the day, usually only the head protrudes from the shelter. Moray eels are faithful to their location and keep looking for the same hiding place. Larger moray eels also have several shelters that can be up to 200 meters apart. Cave systems can be inhabited by single or multiple moray eels, sometimes of different species. Moray eels often live permanently with cleaner wrasse or cleaner shrimp . They can be cleaned from these and any food residues located between the teeth can be removed from the mouth that is open for this purpose. The cleaners are not eaten.

The species of the genera Anarchias and Uropterygius , which are all relatively small, almost never leave their hiding place and hunt exclusively in caves and crevices. They are therefore almost never seen and their way of life is largely unknown. 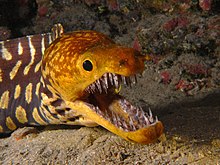 All moray eels are predatory fish and feed exclusively on carnivore . There are no pronounced nutrition specialists. However, depending on whether they have pointed or rounded teeth, the different species feed preferentially on fish and cephalopods or on hard-shelled invertebrates such as crustaceans . Few species eat mussels , snails or sea ​​urchins . Fish eaters are mainly the species of the genera Enchelycore and Muraena and many species of the genus Gymnothorax . Echidna and Gymnomuraena mainly eat hard-shelled animals. The fish hunt mainly at dusk or at night, larger specimens only every second or third night or even less often. Your well-developed sense of smell plays a major role in this. They also eat carrion. With some species of the genera Echidna and Gymnothorax , a special behavior was determined during aquarium observations, which otherwise only occurs in hagfish . To tear off pieces of food from larger dead fish, the extremely agile animals form a knot and pull their head through the resulting knot. This now presses on the prey and forms an abutment when pieces of meat are torn out. The same technique is used to pull prey from narrow crevices. Some species also have a particularly narrow mouth.

Very little is known about the reproduction of moray eels. In some species, such as the ghost moray ( Rhinomuraena quaesita ) and the star- spotted moray ( Echidna nebulosa ), a gender change ( dichogamy ) was found, which is also accompanied by a sexual dimorphism . Courting morays stand up, entwine themselves with their bodies and open their mouths wide. The giant moray ( Gymnothorax javanicus ) lays 200,000 to 300,000 eggs, which after swelling have a diameter of 5 mm.

Fossils of moray eel-like fish are known from the Monte Bolca formation from the middle Eocene of northern Italy. The two genera Dalpiaziella and Paranguilla still have small pectoral fins and are classified in the Paranguillidae family. A close relationship with today's moray eels is uncertain.

Moray eels belong to the eel-like family and, together with the two poorer species and largely unknown families, Chlopsidae and Myrocongridae, belong to the suborder Muraenoidei. All members of this subordination lack the scales, the lateral line organ and the gill arches are reduced and the frontal bone is divided. The moray eels are divided into two subfamilies, 16 genera and around 200 species. 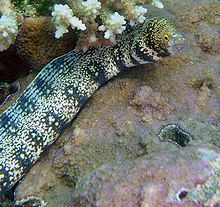 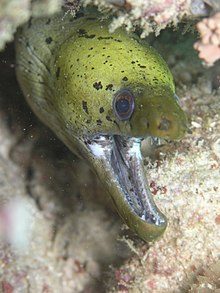 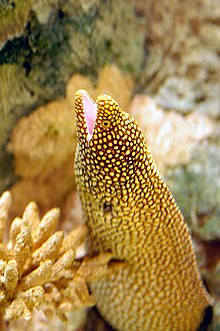 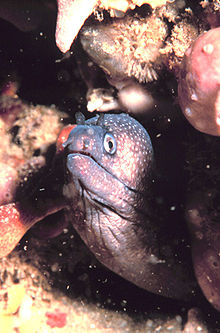 In the first and second gill arch , the lowest of the four gill arch sections is ossified. In addition to the loss of the paired fins, the fin border is also reduced, so that the fish look even more snake-like. Fin rays are only present at the tip of the tail.

Moray eels in the market hall of Funchal , Madeira

In some areas, moray eels are popular food fish. However, the consumption of particularly large species can lead to Ciguatera poisoning , as they accumulate toxins in their meat as the end link in the food chain.

In coral reefs that are heavily frequented by tourists, moray eels are often fed by humans. Moray eels used to feeding change their natural behavior, no longer hunt and can become intrusive towards divers, swim towards them and snap at them. Moray eel bite wounds can be very painful and heal poorly. The bleeding often only stops very slowly. The cause is bacteria on the teeth that get into the wound.

Some particularly colorful morays that inhabit the tropical coral reefs are also caught and imported for aquatic purposes. These are above all the star- spotted moray , the white ribbon moray and the ghost moray . The gold dust moray and the leopard moray are offered by the trade as "freshwater morays", but are better to be kept in brackish or saltwater aquariums . Moray eels are difficult to get used to dead food animals when kept human.

In Conrad Gessner's “Fischbuch” (1558) , the fourth volume of his “Historia animalium”, the moray eel is mentioned in contemporary translations as “Muraal”. It is associated with a species of fish called "Muraal male" ( Latin: Myrus ), although this is a species from the snake eel family ( Echelus myrus ).