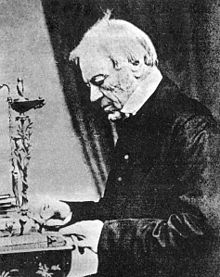 In 1801 Richardson began his medical and partial natural history studies at the University of Edinburgh . In addition, he served 1804-06 as a house surgeon at the Dumfries and Galloway Royal Infirmary , the hospital in Dumfries . He left the university in 1807 and joined the British Navy . There he served as an assistant surgeon and chief surgeon on various ships in the British fleet and toured the North Atlantic , the Mediterranean and the Baltic Sea . In 1816 he made his doctorate in medicine in Edinburgh .

Richardson was ordered to accompany Rear Admiral Sir John Franklin (1786-1847) in his search for the Northwest Passage in 1819-22 as third and 1825-27 as second surgeon . He made botanical, ichthyological and geological observations and recorded them in several scientific works. The plants he collected during these trips are described by the British botanist William Jackson Hooker in his two-volume work Flora boreali-americana (1829–1840).

In the years 1824-38 Richardson served in the Chatham Marine Division as a surgeon, from 1828 as chief physician at Melville Hospital and completed his natural history studies. He was then offered the position of chief physician at the Royal Naval Hospital in Haslar . There it was more possible to research natural history than in the medical direction, and he also became a mentor of scientific luminaries such as Charles Darwin (1809–1882) or Thomas Henry Huxley (1825–1895). In 1840 he was appointed Navy Hospital Inspector and held the post until his retirement.

For the search for the missing John Franklin (1847–49), Richardson were chosen as Commander and John Rae (1813–1893). However, it went out unsuccessfully. Richardson also used the trip to explore the region around the Mackenzie River and Cape Kendall .

In 1855 Sir Richardson retired in Grasmere, but in 1857 he received another doctorate, this time in law at the University of Dublin . He died in Grasmere on June 5, 1865.