The meat fins (Sarcopterygii), also muscle fins , are one of the two classes of bony fish (Osteichthyes). The scientific name of this taxon is derived from a common feature of its representatives, the sarcopterygium ( Gr .: sarx, sarko- = meat, pterygion , diminutive of pteryx = wing, fin), a type of fin with a fleshy stem.

The meat fins are mainly important because the ancestors of the terrestrial vertebrates (Tetrapoda) can be found among their fossil representatives . Today there are still two groups, the lungfish (Dipnoi) with six species and the coelacanthimorpha (Coelacanthimorpha) with two species. In the sense of cladistics , the meat-fins are paraphyletic (not a closed community of descent) if the term does not include the land vertebrates (Tetrapoda).

Apart from the terrestrial vertebrates, the heyday of the meat finisher is long over. The Sarcopterygii have been found in fossils since the Upper Silurian 415 million years ago. In the Devonian , the originally marine meat-fins were spread around the world and colonized fresh water several times independently of one another. The Onychodontiformes , the Porolepiformes (from which the Dipnoi are likely to have descended) and the Elpistostegalia died out at the end of the Devonian, the Rhizodontiformes at the end of the Carboniferous and the Osteolepiformes at the end of the Permian .

Muscled pectoral fin (sarcopterygium) on a specimen of a Comoros coelacanth in the Natural History Museum , London 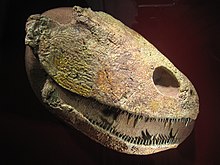 Life picture of a Tiktaalik

The fleshy fin lobe of the paired fins, which, however, also occurs, with a completely different internal anatomy, in the pike fish and some fossil ray fins (Actinopterygii), is the name-giving characteristic of the meat fin fish . A common feature of the class is the structure of the fin skeleton, which has a single, monobasal, bony axis running to the body, which is connected to the shoulder and pelvic girdles and on the lateral radialia. This bone corresponds to the upper arm bone ( humerus ) and thigh bone ( femur ) in the terrestrial vertebrates, so it is homologous to them . In the coelaceans , this fin structure also applies to the second dorsal fin and the anal fin .

The skeleton of fossil forms was more ossified than that of today. Many even had vertebral bodies . The high proportion of cartilage in the skeleton of recent species is therefore very likely secondary.

Another new feature is the caudal vena cava , the lower vena cava in which the blood from the back of the body flows towards the heart. The original cardinal veins are reduced.

Meat fins have cosmoid scales . The cosmin layer consists of enamel and dentine and was crisscrossed by pore channels in the fossil forms. The single-layer enamel showed, also only in the fossil forms, on its underside hexagonal prints of the epidermal cells .

Except for the lungfish and terrestrial vertebrates, all meat-fin fish have always had a two-part skull: a front part could be lifted in relation to the rear part so that it was easier to snatch prey with the mouth. The joint ran across the head behind the pituitary gland approximately at the level of the exit from the trigeminal nerve . The brain was usually too small to be affected. A separate pair of muscles ( M. basicranialis ) caused the lowering, the return to the starting position, when biting. The front part was raised indirectly through the mouth opening, with the jockstrap pushing upwards from the palate. In the case of the ray fins, something similar is achieved “more elegantly” by turning the entire skull upwards (in the front) - the meat fins, however, avoid “getting dizzy” by breaking up the skull, as the labyrinths of the organ of equilibrium are located in the back of the skull. For active swimmers, however, a dismantled skull (as a "bug") is useless, as well as for fish with crushed teeth (lung fish) and for land animals.

However, the (fossilized) joint made it difficult to interpret. It was initially thought to be an artifact, that is, a break at a weak point, or then a mismatch . Two years before the discovery of the Latimeria , however, Hermann Aldinger determined in 1936 that these Sarcopterygians had a skull that was divided into two by a large joint. The extent of this mobility may have been different. Erik Jarvik was of the opinion that this cranial joint had no mobility after he reconstructed such basicranial muscles in the Rhipidist Eusthenopteron . This reconstruction is accepted, while his assumption about the lack of mobility is not shared.

The internal system of the meat finisher is not without controversy. Genetic studies and the existence of a lymphatic system in both taxa suggest that the lungfish are closer to the terrestrial vertebrates than the coelaceans. The fossil forms leading to the land vertebrates are called Rhipidistia .

The following cladogram shows the probable relationships (based on Yu Xiaobo et al . (2010) and Brian Swartz (2010)) ( recent taxa in bold):