The bald pike or mudfish (scientific: Amia calva ; Αμία is an undefined fish name by several ancient authors; calvus means "bald" in the sense of "head without scales"), which is usually called "bowfin" in English, is a predatory fish from North America . It still has numerous features of primitive bonefish ("ganoids") and is the only recent species of both the bald pike or mudfish family (Amiidae) and of the next higher taxon , the order of the bald pike-like or mudfish-like (Amiiformes). The Amiiformes together with closely related fossil representatives form the Halecomorphi . The sister taxa Halecomorphi and real bony fish (Teleostei) together form the Halecostomi . In an alternative grouping, the Halecomorphi, together with the bone pikes and their closer fossil relatives ( Ginglymodi ), form the group of the bone organoids (Holostei).

Bald pike have an elongated, pike-like body. The dorsal fin takes up a third of the body length and has 42 to 56 fin rays and two dark longitudinal stripes. The anal fin is small, has ten to twelve rays and begins at the level of the middle of the dorsal fin. The pelvic fins sit in the middle of the body. The bald pike is covered by small cycloid scales that still have a ganoin coating , a primeval characteristic. Another primitive feature is a small bone plate (gulare) between the two branches of the lower jaw. The inside of the swim bladder is enlarged by a net-like structure and enables the fish to breathe air when its living waters become oxygen-poor in summer due to high temperatures. The color of the bald pike is brown to olive with a darker reticulate pattern on the flanks. Males have a dark, yellow or orange circled eye spot on the upper caudal fin root .

Northern pike feed on small fish, frogs , larger aquatic insects, and crustaceans . They are usually 65 to 70 centimeters long and reach a weight of up to 10 kg with a maximum length of about 110 centimeters (age: up to 30 years; the males remain smaller). Their normal swimming style is called amiiform, with the dorsal fin generating undulating forward (or backward) propulsion. When escaping, Amia can of course help with the compress (laterally flattened), very flexible tail anguilliform. 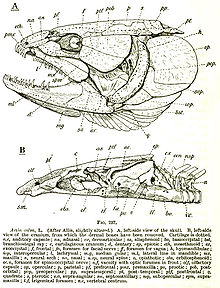 Dermato- and neurocranium of Amia calva . The bone names largely correspond to the now common ones.

Amia is anatomically different from the Teleostei z. B. in the fins and vertebrae. In the bases of the pair fins there are still pterygial elements (as in sturgeon and especially polypterus ). The tail skeleton is still somewhat variable (some epuralia are present). The vertebrae, the notochord constrict already strong are, in part, as "double vortex" pronounced (which shows that no next relationship to teleosts there). Over the (numerous) dorsal fin pterygiophores there are sometimes two radii each. At the end of the midgut there is still a short spiral bowel . At the location of the injection hole there is a blind passage which still contains the large neuromast (cupular sensory organ) which is probably responsible for hearing . At the site of Operkularkieme of sturgeons and gars is still a well-developed vascular network - the gill itself, however, is already impossible because of Operkelhebung the mouth opening. A paired retractor muscle has differentiated itself ( apomorphically ) from the pharynx constrictor to the spine, which, as in higher bony fish, allows packed prey to be swallowed quickly (in order to possibly turn a school into more). Like Polypterus (but also Notopterus , Anguilla and others), Amia has nasal tentacles (tubes) for sniffing in front of the mouth. Amia is the only fish whose chewing muscles have a separate portion for smelling, the nasalis muscle .

The skull consists of 44 (mostly paired) bones - this number is usually much lower in Teleostar. The maxillary can already be swiveled forwards in the sense of "narrowing the gap in the mouth" for sucking (see maxillary apparatus ). The strongly toothed premaxillary “consists” of several smaller bones and the lower jaw of at least nine individual bones (with Teleostei only three!). Almost all bones in the oral cavity are dentate. The symplecticum extends to the temporomandibular joint. The praeopercular already has the sickle-shaped shape typical of Teleosteer: it redirects the lifting of the gill cover by its own muscle via the interoperculum into a mouth opening. With the Lepisosteidae Amia shares z. B. the course of the ventral spinal nerves (against the abdomen) on the outside of the trunk muscles (not on the inside of the body cavity as in all other fish).

The bald pike lives in swamps, plant-rich lakes and rivers in eastern North America from the Great Lakes , with the exception of Lake Superior , and the Saint Lawrence River across the Mississippi and Missouri regions to Florida and the lower reaches of the Rio Grande . It is absent in the northern New England states and in the northern Appalachians . Man spread it a little to the west locally.

The spawning season falls between May and June. The males then build nests on the bottom of the water, to which they gather all kinds of plant parts. Nest building and spawning happen at night. The male guards the approx. 20,000 to 70,000 eggs and later also the hatched fry until they have reached a length of about one centimeter. The larvae hatch after 8-10 days. With their adhesive organ on their mouth, they first attach themselves to aquatic plants; later they collect in the "shadow" under the belly of the father who "leads" them ( brood care ). The juvenile fish owe their survival with sunfish and the like to this behavior . a. Predators in the same biotope.

Bowfin from the Coosa R., Alabama

As a food fish, Amia has no value, although some locals may rave about smoked bowfin . The roe prepared as “caviar” is more popular. They judge US sport fishermen to be "good fighters".

Amiopsis lepidota in the same museum

The Amiiformes experienced their heyday, together with other original bony fish like the Semionotiformes and the Lepisosteiformes , in the Mesozoic Era and made up a large part of the fish fauna, e.g. B. Sinamia from the Lower Cretaceous China. During the Middle Cretaceous they were largely displaced by the real bony fish (Teleostei).

Three families of the Amiiformes have died out.

The Amiidae are the only surviving family with the bald pike and already lived with Amiopsis and Amia in the Upper Cretaceous. Amia kehreri (now Cyclurus kehreri ) also lived in Europe: There are finds from the Eocene , for example. B. in the Messel pit in Hesse.