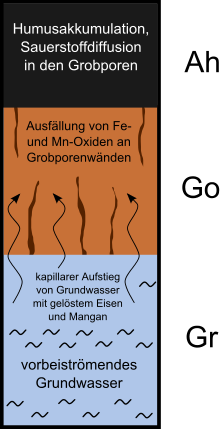 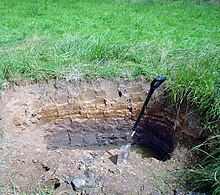 A gley (Northern German: Klei, Russian glej: loam, clay) is a soil influenced by groundwater and namesake of the soil class gleye .

According to Soil Science Mapping Instructions 5 (KA5), a differentiation takes place corresponding to the soil properties. The typical gley is the norm gley with the horizon sequence Ah / Go / Gr, with the G horizon starting within 4 dm below the ground surface (GOF). Furthermore, the Ah and Go horizons are at least 4 dm and a maximum of 8 dm thick. Further subtypes are described in KA5, e.g. B. the Oxigley ; the Gr horizon is missing here because the groundwater is rich in oxygen.

Gleye are formed by the soil-forming process of gleying , in which the groundwater in the soil causes oxidation and reduction processes . Reduced iron is water-soluble and moves in the soil water, so that rust stains and iron concretions develop after renewed oxidation . Soils that are not shaped by groundwater but by backwater are called pseudogleye .

The gley - known as the groundwater bed - was proclaimed soil of the year 2016.

In the Federal Republic of Germany, the class of Gleye (G) belongs to the semiterrestrial soils (groundwater soils ). According to the Soil Science Mapping Instructions, a distinction is made between the soil types Gley (GG), Nassgley (GN), Anmoorgley (GM) and Moorgley (GH), each with different subtypes.

In the International Soil Classification World Reference Base for Soil Resources (WRB) they are counted among the Gleysols . Most subhydric soils , mud flats , marshes and reductosols also belong to the gleysols .

In the US soil classification system Soil Taxonomy , soils with the prefixes (Endo) Aqu belong to it, such as Endoaquoll ( Mollisols ) or Endoaquept ( Inceptisols ).

Gley soils are not tied to specific climatic zones or parent rocks. This type of soil occurs in depressions and lowlands as well as river valleys, as the seepage water from the surroundings collects at these locations . Gley soils carry groundwater all year round with fluctuating groundwater depth . Often the semiterrestrial soils are spatially related to moors or bodies of water.

Natural gley soils are an important component of groundwater-dependent terrestrial ecosystems , as they can store large amounts of water. The natural water retention is increased due to the delayed water release. Gley soils make a major contribution to the formation of new groundwater , as the water is kept in the landscape. These hydromorphous soils contribute to preventive flood protection . In thermal stress situations and dry periods, they act as a cooling landscape element due to the high evaporation capacity ( evapotranspiration ) of the soil and plants.

Agricultural and forestry use is severely restricted due to the high groundwater level in the gley soil. Due to their nature, they are traditionally used as grassland or forest , depending on the groundwater level . If the groundwater level is not too high, grassland is best suited as an agricultural form of use, as arable land use is not appropriate to the location due to the moisture conditions. However, through amelioration measures , many gley soils were drained and heavily anthropogenic in order to be able to use these marginal yield sites more intensively. As a result, arable farming was expanded to include groundwater-affected soils. The drainage and the loss of the natural groundwater dynamics changed the site conditions for the native flora and fauna significantly. The lowering of the groundwater caused humus mineralization due to the increased aeration of the topsoil . The humus is degraded or washed out as a result of the drainage from the uppermost soil horizon and released as carbon dioxide with other gases. The process increases the anthropogenic greenhouse effect. The nitrogen fertilizers of the arable land near the groundwater lead to a deterioration in the chemical condition of the groundwater through the formation of nitrite and the infiltration of nitrate .

Driving on the gley floors with agricultural vehicles also causes severe soil compaction , as the wet floors are sensitive to mechanical pressure. This has a negative impact on soil life and plant yield.

Due to the large number of negative effects of the intensive agricultural use of gley soils on the environment, sustainable management of these locations is sought. A soil-conserving use and management ensures the preservation of these groundwater soils. This includes u. a. the rewetting of the soil through the dismantling of drainage facilities such as ditches and drains.