The Podsol (from Russian подзол podzol , German , ash soil ' , of под pod , under' and зола Zola , ash), and bleaching earth or serozem called an acid, is on nutrient -poor or depleted soil type in a moist cold or humid temperate climate .

Position in the soil systematics

The podsoles form a class in the division of terrestrial soils in the German soil systematics . Currently the class only contains the Podzol soil type . In the international soil classification WRB , most of the Podsols belong to the Podzols. In the US Soil Taxonomy , they mostly belong to the Spodosols . 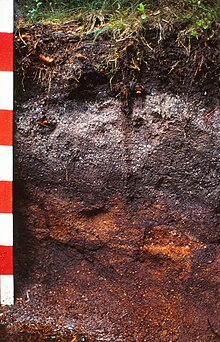 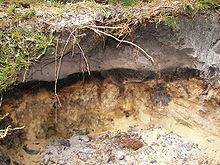 The formation of Podsolen is known as Podsolierung . They are formed from quartz-rich parent rocks such as sandstone , granite or from loose, also quartz-rich sands such as dune sand . The low content of weatherable minerals leads, on the one hand, to a lack of clay minerals and, on the other hand, to a low buffer capacity against soil acidification. Due to the low pH value , there is a downward shift (leaching) of iron and aluminum hydroxide and humic substances with the seepage water from the topsoil to the subsoil. There, at slightly higher pH values, the iron, aluminum or humus compounds are precipitated and fixed again. The result is a bleached, very impoverished topsoil horizon (Ae horizon) and a subsoil horizon that is heavily enriched with iron compounds or humus (Bs, Bh or Bsh horizon).

The development takes up to a thousand years. The coarse-pored (water-permeable) and nutrient-poor Podsol (little humus in the mineral soil) has a low soil life due to the low pH value. In the natural state under the forest, this leads to a heavy, heavy raw humus layer that is difficult to break down and , due to its low mineralization, provides nutrients that are available to plants in small quantities. If the upper B-horizons are hardened to cast stone , this hinders root growth and can also cause water stagnation. Liming and intensive humus management with green and stable manure can significantly improve the fertility of the easy-to-work Podsol.

In the agricultural sector, the podsoles belong to the low-yielding soils. They are sandy, poor in nutrients and acidic and have properties that prevent optimal growth of most crops . In areas with a high proportion of podsol soils, the population was often threatened with hunger in the past. In order to improve the soil, plagging was used on such soils in north-west Germany , so that the podsoles were gradually transformed into pest ash floors . With an evenly high amount of fertilizer and possibly with irrigation, it is possible to operate profitably on Podsolen. However, since Podsol for leaching tendency, there is a risk that fertilizers and pesticides into the groundwater can get.

Areas with a predominant podzol content, such as sand areas or areas with periglacial or Holocene drifting sand sedimentation ( inland dunes ) are mostly planted with forest .

Podsol was named Soil of the Year 2007 on December 5, 2006 by a board of trustees consisting of members of the German Soil Science Society (DBG) and the Federal Soil Association (BVB) .

The Podzol is the typical soil of the boreal coniferous forests with a humid oceanic climate. It is one of the most common types of soil in the northern hemisphere. The low nutrient supply and the low pH values offer sufficiently favorable living conditions for conifer species such as pine , spruce and the various larch species . Outside the boreal coniferous forests, podsols are widespread in the temperate mixed forest zone on quartz-rich rocks. Typical Podzol areas in Central Europe are the sand and dry glacial valleys of Lower Saxony and the large-scale granite and gneiss deposits in the low mountain ranges.

On the basis of the soil horizon sequences, one can differentiate between standard podsol (iron humus podsol) and the deviation subtypes iron podsol and humus podsol.