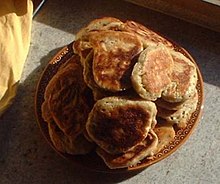 Pickert is a potato dish from Westphalian cuisine . Distribution area is Ostwestfalen-Lippe and the adjacent areas, such as the southeastern part of the Osnabrücker Land .

"Lippischer Pickert" is a pancake-like dish that used to be a "poor man's meal" and is now a Lippian specialty. The dough, which consists of yeast, milk, flour, eggs, grated potatoes and possibly raisins, is fried in the pan and coated with butter, plum or plum jam, jam, compote , apple sauce, turnip greens or liver sausage from the lips . Occasionally the milk is at least partially replaced by water.

“Westfälischer Pickert”, also known as “Lappenpickert”, is also based on grated potatoes. There are also flour, eggs, milk and salt. The preparation and the slow baking take place in a frying pan, previously also on a so-called “pickert plate” made of cast iron. Thin slices of smoked, fatty bacon are placed on the bottom for greasing. Then the dough is thinly distributed in round portions about ten centimeters in diameter. Let it brown on both sides with little heat.

In the climate of barren sandy soils Senne not prepared the Lappenpickert in earlier times to potato and wheat flour, but from buckwheat flour. It was baked on cast iron ovens with a flat top on top. This form of Lappenpickert was also popularly known as "Liarn Hinnerk" (leather Heinrich), as it was usually quite tough.

In the variant of the “box picker”, which is quite common in the Bielefeld and Gütersloh area , it is baked in a box cake form similar to bread, cut into slices after cooling and fried in a pan with hot fat. The box pickert is eaten with butter (salted if possible), but also with the other spreads already mentioned in the Lippischer Pickert. Coffee is often drunk with it.

Thanks to the cooperation of various gastronomic companies from Bielefeld , Pickert can also be found on the menus of restaurants in Boltenhagen on the Baltic Sea . There it is served with diced bacon , fried egg and green salad .