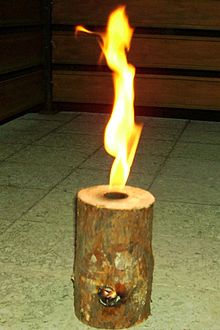 A burning Swedish torch (made according to the blast furnace principle)

The Swedish fire (also Swedish candle , fin candle , Sweden torch , Siberian or Russian Baumfackel is) a heat - and light source from an upright, in the recessed center burning tree trunk . It became known in Europe during the Thirty Years' War and is used today for leisure activities (especially in southern Germany) and also by forest workers. The top surface and the good embers make it ideal for cooking.

Compared to a campfire , it has the advantage that it is more compact and therefore several small heat sources can be distributed over an area; however, the effort involved in preparation is greater.

According to general tradition, during the Thirty Years 'War the Swedes used these burning and glowing logs to fire their soldiers' camps. This had the advantage that the troops did not have to bring their own firewood , but could stock up on site, as freshly felled wood can also burn due to the chimney effect . At that time, however, they had to be content with a hand or hacksaw or an ax as a manufacturing tool.

A delimbed tree trunk is required to make a Swedish fire . This should have a diameter of 30 to 60 centimeters and a length of 50 to 150 centimeters.

The best types of wood are resinous softwoods : spruce , fir and pine . Hardwoods work, but start to glow quite early .

The wood should not be too dry, otherwise it will burn off very quickly.

The trunk must be cut: two mutually orthogonal vertical cuts are made with a chainsaw vertically downwards with the trunk standing up to a base plate of six to eight centimeters so that the fire does not break apart.

Normally, the trunk is divided into quarters by two cuts, or into sixths or eighths for larger circumferences.

If the cut seems too simple, you can experiment with further variants, possibly to optimize a cooking facility: sawing a draft, for example cuts from the side or offset quarters from above and below; Center cavity for detonators; other upper incisions for altered burn-off, for example a cross stitch (requires a draft) or a checkerboard pattern.

Another design has a drill hole (∅ approx.> 20 mm) along the axis of the trunk for the exhaust gases and a second hole radially at the height of the desired floor level for the air supply. It is ignited by filling in some embers or by loading easily combustible material such as kerosene or fuel tablets and lighters. In hardware stores these are also offered as "Russian tree torches" with (candle) wax and wick lighters .

A tree torch can also be made quickly in nature (e.g. by forest workers) without a drill . For this purpose, a cut is made over the middle (approx. 3/5) with a saw at the desired floor height (approx. 5–10 cm) for the “fire floor”. As in the picture (marked with A or B ) split off the pieces on the blue line and remove the core on the red line. Saw a ventilation hole, or lift the smaller section from variant B for the ventilation gap . Finally put the three parts together and z. B. fix with wire, string or nails.

Swedish fire made without a drill :
After a cut at floor level, split according to A or B , C : split off section with a view of the “fire floor”
D : removed core, assembled E : ready-tied tree torch with ventilation hole

The Swedish fire is easiest to ignite with paraffin (e.g. grill lighter ), which is inserted into the side slits and also into the saw cut point of the trunk. Rags soaked in oil are also suitable. Lumberjacks simply pour some of their chainsaw fuel into the center of the torch. If a campfire or the like is already burning, you can use it, e.g. B. with a shovel, also remove some embers and place on top of the Swedish fire. In the case of freshly felled trunks, the Swedish fire should be turned over to ignite (base plate facing up) and placed back on the base plate after burning.

The place of installation should be chosen safely due to the flying sparks and possible falling apart. In order to ignite the trunk evenly, a little paraffin can possibly be added at the beginning. Depending on the size and length, the trunk burns for between two and five hours and glows with intense heat. The embers in the middle of the trunk have a temperature between 1000 ° C and 1200 ° C. After the burn has started, it is optionally possible to place a pan on three nails driven around the drill hole before lighting or on three stones distributed around the drill hole and thus set up an improvised cooking area.