Classic hobo
cooker , made from a tin with a saucepan on top

A hobo stove, also known as a hobo stove, is a fire or cooking area that works according to the chimney effect . It is named after the hobos , North American migrant workers, especially during the Great Depression , for whom it was used as a stove and heater. Today the term is often used for industrially manufactured trekking wood stoves that work on the same principle.

In the simplest case, a hobo cooker can be improvised from an empty tin can .

The traditional method of placing a pot on three stones and lighting a fire in between is uneconomical because only a small part of the heat heats the pot. The hobo cooker makes better use of this energy. 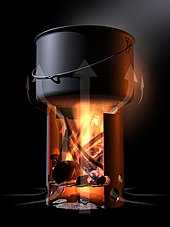 Variant of a hobo cooker made of two cans and with the protective grille of a PC fan as a grillage (between the two cans). On the edge of the top box there are aluminum pliers.

A hobo stove always consists of a tall metal vessel open at the bottom, which serves as a combustion chamber and pan support. There are holes in the lower part of the vessel through which air is sucked in thanks to the chimney effect. The stove is most effective when the fuel is on a wire or perforated sheet metal grate . Otherwise, the fuel simply lies on the floor on which the stove is also located. Smoke and exhaust gases leave the vessel through one or more exhaust openings on the upper edge. As a rule, the hobo cooker is open at the top and heats an open cooking vessel. However, variants of the improvised can cooker are also known in which the bottom of the upside-down can serves directly as a cooking surface.

The radiant heat of a fire operated in it is concentrated through the metal walls of the stove ; at the same time the chimney effect leads to a high air supply. In the hobo stove, therefore, even small amounts of fuel burn completely and at a high temperature. Performance data for small hobo stoves are usually well above the values ​​of portable alcohol stoves, but below those of gas or petrol stoves. As with all open stoves, wind can greatly reduce performance.

Typical fuels are knots, sticks , cones and combustible waste found on the ground . Even damp or rotten wood can be added. Outside of deserts and high mountains, fuel is available everywhere. Hobo stoves with a closed bottom or a corresponding insert can also be operated with liquid fuels. In order to counter the risk of flashes and deflagrations , it is recommended to bind highly volatile fuels such as alcohol or gasoline in a layer of sand.

Some hobo stoves work on the principle of wood gasification .

In the wake of the outdoor boom, commercially available variants of the original do-it-yourself cooker also became popular. They can usually be folded or dismantled and are made of stainless steel sheet or titanium . Particularly compact designs are suitable for backpack trekking, wood stoves the size of a bucket are reserved for canoeists and car travelers.

A further development of the hobo stove is the Rocket Stove , in which the combustion chamber is thermally insulated and the primary air is warmed up more, which leads to a reduction in fuel consumption. 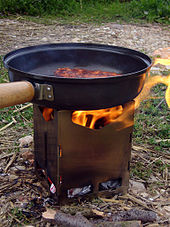 Larger hobo stove in operation. Self-made from a 3-liter tin can, with a wire grate screwed on at the bottom as heat protection for the subsurface

Like the open cooking fire, a hobo stove saves you having to carry fuel when you travel. He needs less and less demanding fuel with higher output at the same time. Hobo stoves can therefore be interesting for traveling

The operation of wood stoves in nature is occasionally viewed less strictly than that of a classic campfire , but basically the same dangers, the same precautionary measures and a special responsibility of the operator apply. In particular, nature conservation requires the subsoil to be protected against scorching and combustion residues ( ash , soot) to be removed without a trace. Wood fires should be avoided where scarce dead wood represents a valuable biotope or where locals serve as fuel.

Use in development aid

Cooking fires are still widespread in many developing countries , for example in the form of an open hearth with three stones on which the pot or clay jug is placed. The low economic efficiency leads to high fuel consumption, which endangers the wood stocks. The use of hobo stoves, which can be built on site from sheet metal scraps or old barrels, can reduce logging. In addition, the health hazard posed by dirty stoves can be reduced. Acceptance programs are carried out to accompany this change in behavior when cooking.