The ZF Friedrichshafen AG (also known as ZF Group known; IF  = "gear factory [Friedrichshafen]"), headquartered in Friedrichshafen is the world's fifth largest automotive supplier and one of the world leading companies in the field of driveline and chassis technology.

The ZF Group stated that it would be represented at around 260 locations in 41 countries in the 2020 financial year. There are also 77 own service companies and over 650 service partners.

93.8% of the owners are the Zeppelin Foundation and 6.2% are the Dr. Jürgen and Irmgard Ulderup Foundation in Lemförde .

The company was founded in Friedrichshafen on Lake Constance in 1915 under the name Zahnradfabrik GmbH for the production of gears and transmissions for aircraft, motor vehicles and boats with the aim of building better transmissions . From the beginning, vehicle transmissions were included as a business purpose in the founding deed to expand the business basis . The head of development at Zeppelin GmbH, Alfred Graf von Soden-Fraunhofen , wanted to manufacture gears using a new process developed by the Swiss engineer Max Maag .

The founders were Luftschiffbau Zeppelin GmbH , represented by Alfred Colsman , and the Max Maag gear factory. Count Soden and Theodor Winz became managing directors. As a result, the gear factory made a name for itself as a manufacturer of transmissions and gears for aircraft , machines and trucks . In 1921 the company was converted into a stock corporation and it operated under the name Zahnradfabrik Friedrichshafen AG until 1991 . The Friedrichshafen-Zahnradfabrik stop was set up on the Teuringertal Railway , which was used by passengers from 1922 to 1954 . The Berlin plant was opened in 1926; The Schwäbisch Gmünd plant followed in 1937 .

Like numerous other companies in the mechanical engineering sector, ZF also produced armaments during the Second World War and employed 2,800 forced laborers by the end of the war . This chapter in the company's history is gradually making its way to the public. Between June 1943 and February 1945 eleven air raids were carried out on the city of Friedrichshafen, which resulted in the almost total destruction of the production facilities at the headquarters. ZF has been in the arms business again since the post-war period, for example as a supplier for the Leopard 1 tank . In addition, ZF is a supporting member of the Deutsche Gesellschaft für Wehrtechnik e. V.

At the beginning of 1970, the US company Borg-Warner took a 50% stake in the production of automatic passenger car transmissions at Zahnradfabrik Friedrichshafen AG .

In 1984 ZF acquired a stake in Lemförder Metallwaren AG , which is now part of the Chassis Technology Division of ZF Friedrichshafen AG . Since the beginning of 1992 the name of the company has been ZF Friedrichshafen AG . The color of the logo changed from black to blue. The reason for this was on the one hand the stronger global orientation of the company and on the other hand the changed field of activity. In 1999 the steering systems division was spun off and converted into an independent GmbH . Both ZF Friedrichshafen AG and Robert Bosch GmbH held a 50% stake in this GmbH (formerly ZF Lenksysteme based in Schwäbisch Gmünd) until March 10, 2015 , after which the ZF stake went to Bosch ( Robert Bosch Automotive Steering GmbH ). In 2001, ZF Friedrichshafen AG acquired the largest company to date, Mannesmann Sachs AG , whose activities are now combined in the Driveline and Chassis Technology divisions.

In September 2009, ZF received a loan from KfW of 250 million euros from the steering committee as part of the Deutschlandsfonds as a result of the financial crisis . This was paid to the company through commercial banks. This loan had to be repaid with interest at the end of the term. The company wanted to save 600 million euros, but wanted to keep the permanent workforce and not cut employees. According to the then CEO Hans-Georg Härter at the press conference on September 15, 2009, the number of employees had already decreased from around 63,288 to 59,771, so that no further reduction was sought.

In 2010, ZF took over the wind power transmission manufacturer Hansen Transmissions and integrated it as the ZF Windpower division . In the same year, the subsidiary Openmatics was founded in Pilsen , which developed the telematics platform of the same name .

As part of the realignment of the group, all major German ZF companies merged into ZF Friedrichshafen AG in August 2011 .

On September 15, 2014, ZF announced that it would take over the automotive supplier TRW Automotive . The takeover was completed in mid-May 2015. With this merger, total sales of around 29 billion euros and a group with over 130,000 employees were created. The purchase cost ZF 9.6 billion euros; previously, ZF Lenksysteme (ZFLS), which was previously owned by Bosch and ZF, was sold by ZF to Bosch for antitrust reasons. The merger is expected to provide new impetus , especially in the field of electromobility and autonomous driving .

In November 2016, the ZF Forum was opened as the new corporate headquarters. On the ground floor it houses a publicly accessible company museum.

At the end of March 2019, ZF announced that it would take over the automotive supplier WABCO for 7 billion US dollars. On June 27, 2019, WABCO's shareholders approved the takeover offer. The process was completed on May 29, 2020. WABCO was integrated into the group as a separate division. Also for antitrust reasons, ZF sold RH Sheppard , a subsidiary of WABCO, to Bendix Commercial Vehicle Systems LLC , a subsidiary of Knorr-Bremse , for $ 149.5 million. 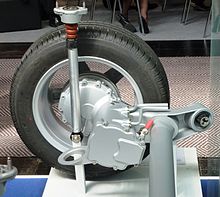 In the Drive Technology Division, headquartered in Saarbrücken, ZF bundles the drive technology activities for passenger cars. This includes the development, production and sale of gearboxes, axle drives, drive modules and drive components. The division is divided into the three business areas of transmissions, axle drives and drive modules at twenty production and development locations with around 20,000 employees:
The business area of ​​transmissions develops, produces and sells automatic transmissions, manual transmissions and dual clutch transmissions at seven locations. The Drive Modules business area is responsible for active starting systems such as torque converters and double clutches, clutch systems, dual mass flywheels, automation of manual transmissions and electric drives. These products are developed and produced at eight locations worldwide. The head office of the business area is in Schweinfurt . In 2019, the division's sales were 7.312 billion euros.

At the beginning of 2012, ZF took over the Neunkirchen plant of Bauknecht Hausgeräte GmbH in Saarland and employed 240 people there, where dishwashers were previously produced. The reason was the relocation and expansion of the previous component production in Saarbrücken, which had reached the limits of capacity.

In December 2012, the Belgian investor Punch Metals International took over the GM plant in Strasbourg , where it produces 8-speed automatic transmissions for ZF under license. This will relieve the ZF Saarbrücken location, which is around 100 kilometers away and which has reached its expansion limits.

The commercial vehicle and special drive technology division, based in Friedrichshafen, posted sales of EUR 3.701 billion in 2019. The number of employees was 13,302.

In the special drive technology business area formed in 2011, special drive trains are also developed in small numbers. The product lines are special vehicle systems, rail drive systems as well as industrial drives and actuating systems. This division places particular emphasis on innovative and individual solutions in drive technology. Individual production has become possible thanks to a “ modular ” design of the gear series. A large number of transmission variants can be put together from several variants of one structural component within a transmission type.

The business field manufactures complete ship propulsion systems, also as a hybrid variant, with ship gears , rudder and side jet systems , electronic control systems, pod propulsion systems , steer-by-wire systems as well as fixed and variable pitch propellers . It recorded an increase in sales of 18% to EUR 246 million. The number of employees at the end of 2010 was 1,265.

The business area is responsible for the development, production, maintenance and sales of drive and control components that are suitable for the operation of aircraft. In 2014 it achieved sales of € 71.5 million. The number of employees increased to 329.

The business area emerged from Cherry Corp., which was taken over in 2008 . and operated under the name ZF Electronics GmbH with headquarters in Auerbach in the Upper Palatinate until 2011 . It is responsible for the development and production of controls, electronic modules, sensors and switches for the automotive industry, components for industrial and household appliance applications as well as computer input devices. The electronic components business area was also able to increase sales to EUR 640 million and thus by 10%.

At the end of 2014, 3,546 people were employed, an increase of 16% compared to the previous year. In January 2016, the Electronic Systems, Electrical Drive Technology and System House business areas were merged to form the sixth E-Mobility division ; after the TRW takeover, the number of employees here rose to 5,300.

In 2008, ZF merged the two activities of trading ( ZF Trading ) and service ( sales and service organization ) to form the new ZF Services division . The business area is responsible for the global trading business with the product brands Sachs , Lemförder and Boge . In February 2009, ZF Services sold its AutoCrew franchise concept for repair shops to Bosch .

The ZF Race Engineering GmbH is a 100 percent subsidiary of ZF Friedrichshafen AG and develops, designs and produces drive and chassis components for racing cars and power-amplified production cars in the world. It was founded in 1998 as an independent company of what was then Sachs AG in Schweinfurt. Today the motorsport company supplies all well-known racing series, from Formula 1 to the WRC to the DTM .

The ZF Lenksysteme GmbH - founded on 1 January 1999, based in Schwabisch Gmund  - was a joint venture of ZF Friedrichshafen AG and Robert Bosch GmbH . Both partners each held 50% of the capital. The company developed and produced steering technology for cars and commercial vehicles in 16 foreign locations in nine countries in Asia, Europe, North America and South America. In the field of commercial vehicle steering and pumps, it was the global market leader, and in 2008 it made it to third place among the market leaders in the field of electric steering . 2010 was the most successful year so far in the twelve-year history of the joint venture. Compared to the previous year, sales rose by 37% to EUR 1,501 million. Sales were even 14% above the pre-crisis level. The number of employees rose by 9% to 5,546 employees (2010 key figures based on 50% ZF share).

On September 15, 2014, the two partners announced that Bosch would take over the stake in ZF AG in spring 2015 . The parties have agreed not to disclose the purchase price. Because of the completed on May 15, 2015 acquisition of TRW Automotive and the consequent establishment of the Division TRW Automotive Active & Passive safety technology ( Active & Passive Safety Technology ) features the ZF Group again Steering Group Technology. 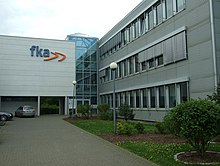 The fka GmbH is a provider of development services for the automotive industry. It was founded in Aachen in 1981 by University Professor Jürgen Helling as the Research Company for Motor Vehicles [mbH] Aachen . Today fka is a subsidiary of ZF Friedrichshafen AG and Voss Automotive GmbH , Wipperfürth .

The fka cooperates closely with the Institute for Motor Vehicles (ika) of the Rheinisch-Westfälische Technische Hochschule ( RWTH ). Customers include domestic and foreign automobile companies, component manufacturers and suppliers as well as public institutions. The services of the divisions chassis , body , drive , electronics , Automated Driving , Vehicle Concepts , thermal management , acoustics and automotive system evaluation include nearly all relevant development steps for vehicle development. The tasks range from conception, construction and simulation to prototype construction and experimental testing. The range of services is supplemented with strategic and technical advice.

In addition to promoting professional volleyball players , the Zeppelin University (ZU) or its own art foundation , which awards grants and the ZF Music Prize , the company is also involved with help, such as in India in 2009 or natural disasters such as in Haiti in 2010, through the non-profit association ZF helps with addiction prevention initiatives .

The company promotes the technical education of children and students, among other things by awarding scholarships, educational events, increasing the number of apprenticeships and student internships.

The ZF Friedrichshafen AG is on the TO Foundation founding partner of Zeppelin University (ZU).