The Cherry GmbH is a German manufacturer of peripherals for desktop computers based in Auerbach in the Upper Palatinate . With its "MX technology", Cherry is one of the market leaders for keyboards with mechanical switches.

The company was originally founded in the  United States  in 1953 under the name CHERRY Electrical Products . As a manufacturer of electrical engineering, mainly switches and sensors, the company grew from 1965, primarily as a supplier to the automotive industry, and expanded to Asia and Europe in the 1970s. After the conversion into a stock corporation in 1978, it was split up in 2000. The core company Cherry Corporation was taken over by Peter Cherry, the founder's son. In autumn 2008 he sold his shares to the automotive supplier  ZF Friedrichshafen AG , which changed the name to  ZF Electronics GmbH  . In July 2011 the subsidiary was merged with the industrial technology division of the parent company. The name Cherry was only retained by the American subsidiary and as a brand .

The former peripheral equipment division was separated from the rest of the business four years later, spun off as Cherry GmbH on January 1, 2016,   and sold to the Hamburg- based investment company GENUI GmbH in October of the same year .

The company was founded in 1953 by Walter Cherry (1917–1996) in Highland Park , Illinois in the United States under the name CHERRY Electrical Products and was continued by his son Peter after his death. It is reported that the company initially started production in a restaurant basement, but after just one year had sales of $ 200,000 and a profit of $ 15,000. In 1963, a German subsidiary was founded under the name CHERRY Mikroschalter GmbH , which was able to move into newly built business premises in Bayreuth in 1969 .

Starting in 1965, the company began supplying the American auto industry with its switches and soon after began building a new headquarters with business premises and production facilities in Waukegan , Illinois, which was completed in 1970. In 1972 Cherry founded the Hirose CHERRY Precision Company joint venture in Kawasaki, Japan and expanded with CHERRY Electrical Products Ltd. also to the UK . In 1973 Cherry finally launched a line of computer keyboards.

In 1978 the company was converted into a public limited company. The German subsidiary changed its headquarters as Cherry GmbH in 1979 to Auerbach in the Upper Palatinate. In the following years the company continued to grow and in 1980 founded a branch in France, in 1988 the subsidiary Cherasia Ltd. in Hong Kong , 1992 CHERRY Australia Pty. Ltd. in Melbourne , 1993 CHERRY SRO in the Czech Republic and 1994 TVS CHERRY Private Ltd. , a joint venture with TVS Group in India.

The CHERRY Semiconductor was sold in 2000 and the remaining Cherry Corporation , headquartered in Pleasant Prairie , Wisconsin went back into private ownership. The company continued to serve the automotive, home appliance and computer industries with production facilities in Europe, America and Asia, as well as sales offices and distribution partners around the world. According to the company, switches and other components manufactured by Cherry were installed in more than 80 percent of the cars produced in Europe in 2005.

In 2007 Cherry had around 3,100 employees worldwide, around half of them in Germany, and generated sales of 400 million US dollars, of which around 65 percent came from Europe. The German branch in Auerbach also looked after a branch in the Wolfsbach district of Bayreuth with around 200 employees. This plant was rebuilt in 1995 and combined the two previous Bayreuth plants in one building complex. Primarily, assemblies for the automotive industry are manufactured in Wolfsbach using the injection molding process. Production in Germany comprised components from the automotive , information technology, household appliances, electrical engineering and mechanical engineering sectors .

In the Automotive division, applications in the areas of bodywork , comfort and safety, as well as the drive train were produced. This included switch and sensor solutions for automobiles. Since 1997, sales in the Automotive division have tripled. Touch controls based on infrared technology, electronic rotary selector switches or mechanical precision microswitches were used in washing machines, dryers, dishwashers or electric stoves and ceramic hobs.

In autumn 2008, Peter Cherry, owner and CEO, sold his company to the automotive supplier ZF Friedrichshafen . As a wholly owned subsidiary of the ZF Group, Cherry was then renamed ZF Electronics GmbH and the headquarters moved from Pleasant Prairie , Wisconsin to Auerbach in the Upper Palatinate . In July 2011 the merger with ZF Friedrichshafen AG took place.

On January 1, 2016, the “Computer Input Devices” division, which had recently generated 12 percent of total sales, was spun off from ZF Friedrichshafen AG as Cherry GmbH . The “Cherry Industrial Solutions” division (switches and sensors), with products primarily for the automotive industry, remained with the parent company. ZF Friedrichshafen then announced that it would no longer use the Cherry brand name for industrial solutions from 2017.

When Cherry GmbH in October 2016 was followed by management buy-out . All shares held by ZF Friedrichshafen AG were sold to the Cherry management and the holding company GENUI GmbH from Hamburg as the new main owner.

Cherry is one of the supporters of the FIDO alliance , which in 2013 developed the industry standard Universal Second Factor (U2F) for generally applicable two-factor authentication .

In November 2017 it was announced that Cherry is planning to set up a new plant in Auerbach in Upper Palatinate by the end of 2019 . The premises in Cherrystraße and the plant in Bayreuth remained with ZF Friedrichshafen AG after the sale to GENUI. Cherry GmbH will initially act as a sub-tenant until its own plant is built. In May 2018 Rolf Unterberger took over the position of managing director from Manfred Schöttner , who retired due to old age.

Cherry is primarily known as a manufacturer of input keyboards . The integration of magnetic and chip card readers and biometric fingerprint sensors resulted in special keyboards for applications in the areas of healthcare , security, and point of sale (PoS). In 2006, the Federal Office for Information Security (BSI) awarded the Smart Terminal ST-2000 based on the SmartBoard G83-6700 ( PS / 2 keyboard with serial reader) and the SmartBoard G83-6744 ( USB keyboard with USB chip card reader) the third product from Cherry GmbH with Common Criteria certification. Cherry develops its products together with Authentec, Gemalto and Bromba.

Cherry enjoys an excellent reputation among high-volume computer users with its high-quality mechanical keyboards, as the keyboards are very durable and reliable and offer a good typing experience. Several other keyboard manufacturers, e.g. B. Razer , install switches from Cherry in their own keyboards. 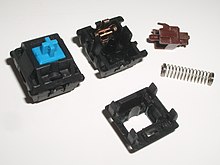 Cherry MX is next to ALPS and IBM Buckling Spring the most widespread variant of buttons in mechanical keyboards. Cherry MX switches that de facto technically buttons are, were invented in the early 1980s and patented ( patent US4467160 . ). They are available in different versions, which are usually named after their color and differ in their type of actuation and the required actuation force. The most common designs are black and red (linear) and brown and blue (tactile). When a tactile button is pressed, a resistance must be overcome halfway that reports tactile feedback . Some species also have a movable slide that is responsible for the typical click sound when triggered . The MX-Green switches offer the strongest tactile and audible feedback, and were compared with the buckling spring switches from the IBM Model M compared. According to the manufacturer, the lifespan is at least 50 million keystrokes.

In 2005 the jury of the Industrial Excellence Award competition awarded the prize for the best factory in Europe to Cherry GmbH in Auerbach in the Upper Palatinate . In 2006 the company received the Automotive Lean Production Award from the industry magazine Automobil-Produktion . In 2008 the plant in Bayreuth received the Bavarian Quality Award 2008 for corporate quality in industrial production companies.