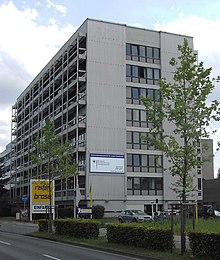 The Federal Office for Information Security ( BSI ) is a federal authority in the division of the Federal Ministry of the Interior, for construction and home with headquarters in Bonn , the questions of IT security is responsible. The guiding principle of the BSI is: "As the federal cyber security authority, the BSI shapes information security in digitization through prevention, detection and reaction for the state, business and society." The number of positions at the BSI has doubled between 2016 and 2019 to almost 1,290 positions . For 2020, further positions are planned for the BSI in the federal budget, so that the number of positions will be around 1,430.

After Otto Leiberich left, Dirk Henze was appointed the new BSI President with effect from January 1, 1993. He was followed in March 2003 by Udo Helmbrecht . Michael Hange then took office as President on October 16, 2009 and was released into retirement on December 11, 2015.

According to the coalition agreement of the parties to the federal government of February 2018, the scope of duties of the Federal Office will be expanded. It provides advice to small and medium-sized companies and is being expanded as a national cybersecurity authority. This includes central certification and standardization for IT and cyber security. The BSI is also given additional tasks in the area of ​​digital consumer protection.

In order to meet the space requirements of a growing authority, the BSI is planning to build a new service property in Bonn. The Federal Office, which is currently spread over five locations in the city, is to be bundled in a new building near Bonn's Rheinaue meadows. The new location is designed for 950 people.

For cooperation with the federal states, the BSI has established a national liaison system with contacts in the cities of Hamburg, Wiesbaden, Bonn, Stuttgart and Dresden. In 2017 the BSI set up a liaison office in Wiesbaden On February 5, 2019, the BSI opened a liaison office for the North Region in Hamburg. With its presence in Hamburg, the cyber security authority is expanding its range of information and support for companies, authorities, municipalities and other institutions in northern Germany. The liaison office serves authorities, companies and other institutions in the federal states of Bremen, Hamburg, Mecklenburg-Western Pomerania, Lower Saxony, Saxony-Anhalt and Schleswig-Holstein as a point of contact for questions about the BSI and the topic of cyber security. On July 11, 2019, the letter of intent was signed that a second location of the Federal Office for Information Security (BSI) with 200 jobs will be built in Freital near Dresden . For the East region in Saxony, the direct exchange is to be facilitated and the accessibility of the BSI on site improved. The second office of the BSI at the Freital location was opened on December 11, 2019 by the Saxon Interior Minister Roland Wöller , the Freital Mayor Uwe Rumberg and BSI President Arne Schönbohm.

The budget committee of the German Bundestag has decided on another branch in Saarbrücken with 30 posts.

The area of ​​responsibility of the BSI is determined by the law on the Federal Office for Information Security (BSI law). The aim of the BSI is the preventive promotion of information and cyber security in order to enable and promote the secure use of information and communication technology in the state, economy and society. For example, the BSI develops practice-oriented minimum standards and target group-specific recommendations for action on IT and Internet security in order to support users in avoiding risks.

The BSI is also responsible for protecting federal IT systems. This is about the defense against cyber attacks and other technical threats against the IT systems and networks of the federal administration. The BSI reports on this once a year to the Interior Committee of the German Bundestag.

The tasks of the BSI also include:

A new organizational structure of the BSI came into force on April 15, 2019, which takes into account the new requirements and the increase in the number of staff at the BSI. With tasks in the field of digital consumer protection or certification and standardization as well as in the design of secure digitization in the energy transition, in the healthcare sector or with the new 5G mobile communications standard, the BSI fulfills an important cross-sectional function as a central competence center for cyber security. With the new organizational structure, the BSI is divided into eight departments, including seven specialist departments and one department for administrative tasks. The specialist departments are each divided into up to three specialist areas. A special feature is the new TK department, in which the technical competence centers of the BSI are brought together. The presentations in this department deal with topics such as artificial intelligence, the security of industrial control systems, cloud computing, secure 5G infrastructures, emission security or the analysis of hardware and software products. In addition, there is a management staff divided into three staff areas.

The BSI is the central certification body for the security of IT systems in Germany ( computer and data security , data protection ). Testing and certification is possible in relation to the standards of the IT Baseline Protection Manual , the Green Paper , ITSEC and the Common Criteria . The fees of the BSI according to BSI law - for example for certification according to Common Criteria, are set out in the BMI's Special Fees Ordinance. The Federal Statistical Office calculates the fees.

The BSI is the national authority in the field of cryptography, which creates recommendations and technical guidelines for cryptographic procedures and is involved in the development of international crypto standards.

In mid-2017, the BSI set up a competence center to bundle the BSI's activities in the field of artificial intelligence and machine learning.

In order to promote alternatives to proprietary products, the BSI is increasingly committed to the use and further development of free software .

According to the BSI Act, the authority, as the central reporting office for IT security, stores all log data that is generated during online communication between citizens and federal administrative institutions .

When the law to increase the security of information technology systems (IT Security Act) came into force in July 2015, the tasks and powers of the BSI were expanded ( Federal Law Gazette I, p. 1324 ). According to Section 8 of the BSI Act, operators of critical infrastructures must implement state-of-the-art IT security and regularly demonstrate compliance with the BSI. If security deficiencies are discovered, the BSI may order their removal in agreement with the supervisory authorities. In addition, the BSI will be the central reporting point for IT security in critical infrastructures in accordance with Section 8b BSIG. The operators must report significant IT disruptions to the BSI if they can affect the availability of critical services. If notifiable IT disruptions occur at a KRITIS operator, the BSI may, if necessary, also oblige the manufacturers of the relevant IT products and systems to cooperate. In addition, according to Section 7a, the BSI is granted the authority to examine IT products for security in order to perform its tasks.

In order to support the states and municipalities, federal and EU authorities as well as companies, think tanks and decision-makers in society, the BSI has been building liaison systems with liaison persons in Wiesbaden, Berlin, Stuttgart, Hamburg and Brussels in a pilot process since the beginning of 2017. The liaison officers provide an overview of the BSI's offers on site and provide advice and support if required.

The National Cyber ​​Defense Center (Cyber-AZ), which started on April 1, 2011 , is a cooperation facility of German authorities at federal level to defend against electronic attacks on IT infrastructures in the Federal Republic of Germany and its economy. The Cyber ​​Defense Center (Cyber-AZ) is a core element of the cyber security strategy adopted by the federal government in 2011. The Cyber-AZ is intended to optimize operational cooperation and coordinate protective and defense measures. This is done on the basis of a holistic approach that brings together the various threats in cyberspace: cyber espionage, cyber spying, cyber terrorism and cyber crime. The goal: quick exchange of information, quick assessments and specific recommendations for action derived from them. Just as the threat situation has changed since 2011, so has the Cyber-AZ. It developed from a pure information hub to a central cooperation platform for IT security authorities. There was criticism of the center from the Federal Audit Office, the audit office believes that the Cyber-AZ is "not suitable for bundling the responsibilities and capabilities distributed across the administrative landscape in the defense against attacks from cyber space." Bodies reacts and initiates an evaluation and further development process in Cyber-AZ. The BSI sent the results of this process to the questioner in July and September 2016 in response to an IFG request from the blog Netzpolitik.org, who made them publicly available on the fragdenstaat.de platform.

The Alliance for Cyber ​​Security is an initiative of the Federal Office for Information Security, which was founded in 2012 in cooperation with the Federal Association for Information Technology, Telecommunications and New Media eV (Bitkom) and was thus able to celebrate its fifth anniversary in 2017. As an association of all important players in the field of cyber security in Germany, the alliance aims to provide up-to-date and valid information on threats in cyber space. The initiative also supports the exchange of information and experience between the participants. The Alliance for Cyber ​​Security now includes more than 4,000 institutions, including almost 100 partner companies and 45 multipliers. Participation is free and can generally be requested by any German institution. Since 2012, the Alliance for Cyber ​​Security has been able to offer hundreds of expert contributions and, on average, an event every fifth day on a wide variety of IT security topics free of charge for its participants. In future, the dialogue with various industries, such as the chemical industry and the automotive industry, is to be intensified. In addition, cooperation with other cyber security initiatives is to be intensified in order to further expand the network of companies, authorities and institutions. In particular, the small and medium-sized companies, which often have special know-how worth protecting, are increasingly the focus of the Alliance for Cyber ​​Security.

The tasks of the BSI include informing and sensitizing citizens for the safe use of information technology, mobile communication media and the Internet. The BSI therefore offers an Internet offering specially tailored for citizens. On the website, the topics and information relating to IT and Internet security are dealt with in such a way that they are also understandable for technical laypeople. In addition to pure information, the BSI also offers specific and implementable recommendations for action, for example on topics such as email encryption, smartphone security, online banking, cloud computing or social networks. Private users can also contact the BSI by phone or email with their questions about IT and Internet security. In addition, the BSI offers the “Bürger-CERT”, a free warning and information service that quickly and competently informs citizens and small businesses about weak points, security gaps and other risks and provides specific assistance. The planned IT Security Act 2.0 should also assign consumer protection competencies to the BSI.

Civil servants and collective bargaining employees , if they are used by the Federal Office for Information Security, receive a job allowance of currently (as of 2019) 96.63 to 193.27 euros in accordance with Annex I (to Section 20, Paragraph 2, Clause 1) of the Federal Salary Act. depending on their salary or salary group. 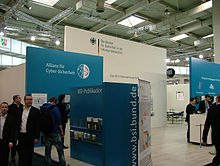 Subordinate division of the Federal Ministry of the Interior, Building and Home Affairs (BMI)